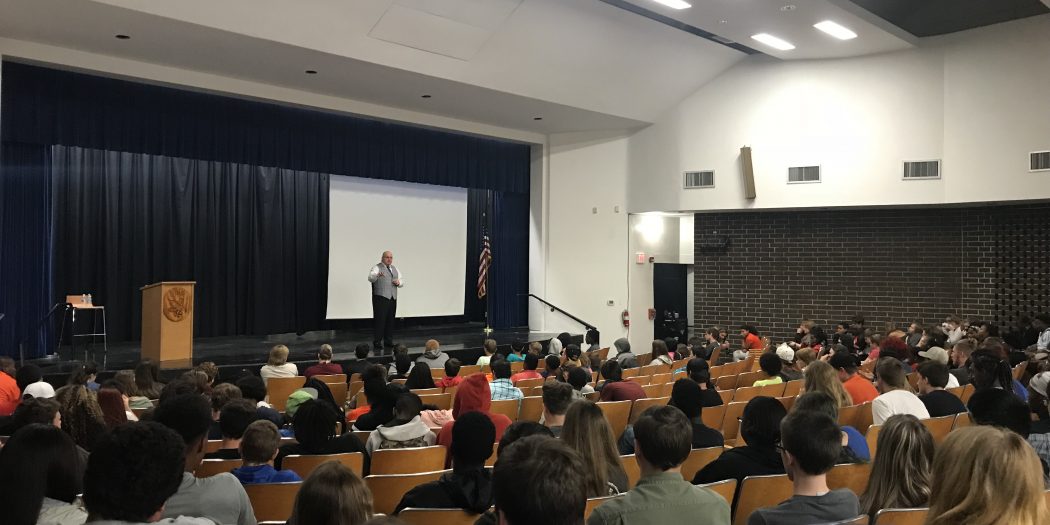 John Spence speaks to an auditorium full of students and teachers at Hawthorne Middle/High School on April 13. (Camille Respess/WUFT News)

Hawthorne Middle/High School leaders wanted to bring in a new voice to help energize students ahead of the Florida Standard Assessments (FSA), which begin Monday.

John Spence, a business expert and motivational speaker, spent an hour on Friday afternoon in the school’s auditorium talking to students and faculty about his path to success and lessons he has learned.

The school is on the brink of closure, and the scores students receive on the FSA matter now more than ever. Student performance on the assessment plays a large role in the grade Hawthorne will get from the state for this school year.

The school received D grades for the past three years. Under House Bill 7069, which was signed into law in July 2017, schools that earn below C-level grades for three consecutive years have one year to turn it around and earn a passing score. If they don’t pass, schools have three options: close, become a charter school or have an outside operator take over.

Hawthorne has selected closure for the 2018-2019 school year if it does not earn a C or higher.

The most recent time Hawthorne scored at least a C was in the 2010-2011 school year.

Spence, who lives in Gainesville and spends most of his time traveling for business, said he came to speak at Hawthorne out of love for the community and education.

“It is our community and it’s young kids who need help,” he said. “I love Gainesville and this area because you can make an impact.”

During his speech, Spence told the audience of around 300 his keys to academic success: reading, asking for help and forming study groups.

Matt Surrency, mayor of Hawthorne, said the environment ahead of FSA testing has been optimistic, but the pressure can still be felt.

“What we tried to do today was relieve some of that pressure,” he said.

The assessment is set to run from Monday through May 11.

Surrency, a former baseball coach at Hawthorne, compared the preparation for the test to training for an important game.

He said educators at the school have given students the skills and tips they need. With FSA testing starting on Monday, it is now time for these students to execute on what they have learned, he said.

Surrency also said that while improving the grade of the school is of high importance, improving the lives of these students is Hawthorne’s top priority.

India White, a math coach, is in her first year at Hawthorne after serving as vice principal of A.P. Leto High School in Hillsborough County for three years.

White compared the preparation Hawthorne has done for the FSA to a boot camp.

White has gone so far as to post math formulas throughout the hallways at Hawthorne so students can see them throughout the day, even when they are not in a classroom.

Spence’s speech was gratifying for White because she believed it taught students about taking responsibility, loving others, as well as ways to be successful and how to find intrinsic motivation.

“As teachers, we say this 180 days of the school year, but there’s nothing like hearing it from someone who is this successful,” she said.

While the school has put a focus on the FSA, White reminds students that the score they receive is not a reflection of who they are.

“Our kids are more than a test score, they are a whole package, and they are our leaders,” she said.

According to Alachua County School District staff attorney Brian Moore, the grade Hawthorne receives for the 2018-2019 school year will likely be released in July.

For now, the school is remaining optimistic and working to motivate and energize students in what could be Hawthorne’s final semester.

“These kids did not get us into this situation. We have been in this situation for awhile,” Surrency said. “But they can be the ones who can save us.”

Camille is a reporter for WUFT News who can be reached by calling 352-392-6397 or emailing news@wuft.org.
Previous Apr. 13, 2018: Afternoon News in 90
Next Teacher Aims to Bring ‘Smooth Flava’ to Gainesville