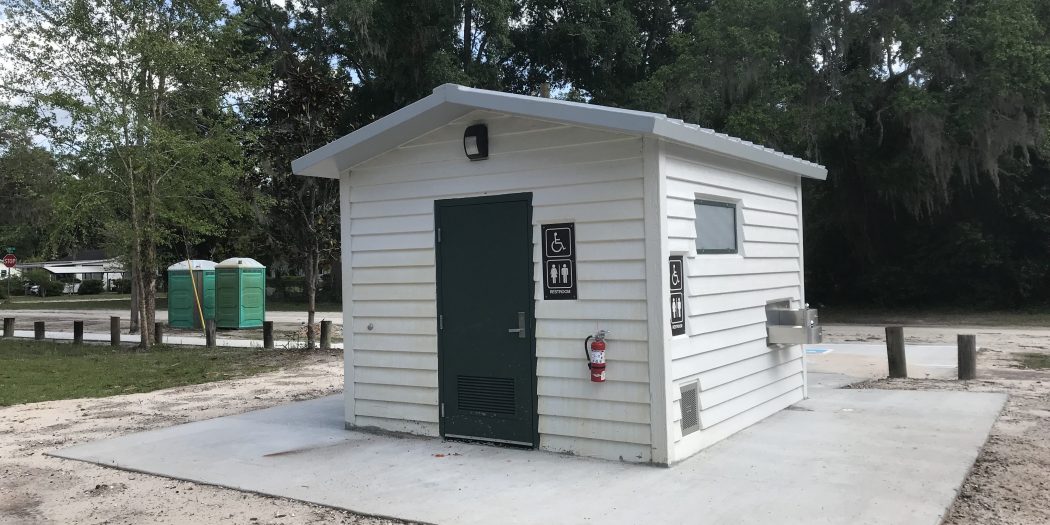 Melrose Heritage Park newly completed restroom remains locked and unused, as there is no way for visitors with disabilities to access it. (Photo courtesy of Joe Rush)

Visitors to Melrose Heritage Park can enjoy a day in the enclosure of the gazebo or among the shade of several massive oak trees, while children run around the central fountain and through the playground. They can also shop at a”Multi-Market” farmer’s market, which occurs periodically with vendors selling crafts, art, jewelry and produce.

Yet while the park endures as a central landmark in the small town of Melrose, the only thing missing has been access to a functioning restroom. That changed this spring after one was constructed, a strong improvement over previous Port-A-Potties. But recently, a community back-and-forth has occurred over just who has the keys to keep the restroom open.

And some community leaders are frustrated.

Joe Rush, president of the Melrose Business and Community Association, said that he paid for nine new lights for the park along with the new restroom, which includes a handicap-accessible stall. The lights cost about $25,000, and the restroom cost about $45,000.

“The bathroom has been finished for months, but the door remains locked and the bathroom unused because the county has not done their part,” Rush said. He said each time he has visited the restroom, it has been locked.

Larry Harvey, district 4 commissioner for Putnam County said the reason the restroom has recently gone between being locked and unlocked does not have to do with a delay in installation of ADA-compliant sidewalks.

“The issue is with who has the key,” Harvey said.

At a meeting of the Melrose Business and Community Association on Feb. 13, Keith Bollum, president of Historic Melrose, Inc., said Larry Harvey, district 4 commissioner for Putnam County, promised funds to install a ramp in compliance with the federal regulations. In order for the restroom to be usable, there must access for those with disabilities.

According to an email correspondence between Harvey and Bollum, the restroom was finished in May. The sidewalks and parking pad were installed in February.

About 10 years ago, the parcel of land along FL-26 and Pearl Street in Melrose was privately owned. Concerned that the land would be sold for commercial development, members of Historic Melrose, Inc. worked to raise enough money to purchase the land for a park.  Melrose then turned their new park over to Putnam County for maintenance and operation.

Rush explained that Melrose residents make improvements they can afford, and the county is responsible for landscaping and bills. The park is under the jurisdiction of Putnam County, according to the website for the Putnam County Parks and Recreation department.

According to the Americans With Disabilities Act, it is not enough to simply provide a restroom stall for those with disabilities. In order for it to meet requirement for use and operation, park-goers with disabilities must also be able to easily access the stall.

The ADA Standards for Accessible Design requires that the “path of travel” to an altered area must be readily accessible to and usable by individuals with disabilities, including individuals who use wheelchairs. This includes a continuous and unobstructed passage to the facility with parking access aisles, ramps and sidewalks.

Several Melrose residents, including Rush, believe the delay in the opening of the restroom is Putnam County’s fault. However, Harvey said the county has followed through on its promise, and he added that Melrose residents were responsible for the delay in having a permanent restroom. This particular improvement had been in the works for four years, but he said the design kept changing. He had agreed to install the necessary sidewalks after the facility was finished.

Harvey said once it was completed, the sidewalks and a handicap parking pad were installed to meet ADA regulations. He said the county provided keys two weeks ago and supplies were stocked. He said a few keys are “floating around” among Melrose residents and county employees, but he does not have one himself.

As of publication time, the bathroom door was unlocked, according to James Peffley, vice president of Historic Melrose, Inc.

But he thinks some people have been manipulating the door lock timer without permission from the project manager or Putnam County.

“I assume they had good intentions,” Peffley said. “They should not have entered the facility before the last two inspections were complete, particularly when they have no expertise on locks or electronic timers.”

Harvey said Angie Whisnant, director of the Putnam County Parks and Recreation department, assured him that the electronic lock, which is on a timer to only be unlocked during the day, is working. He said there is a chance someone with a key could have locked it for whatever reason.

Issues involving Melrose Heritage Park are not new to residents. In November, a massive live oak tree tipped over. Despite their best efforts to save the tree, contractors paid for by Putnam County chopped it down and took it away.

“Melrose is on fire about issues in the park,” said Deb Massie, vice president of the Melrose Business and Community Association and the coordinator of “Multi-Market.”

Taylor is a reporter for WUFT News who can be reached by calling 352-392-6397 or emailing news@wuft.org.
Previous UF Gator Marching Band Breaks Ground On New Practice Facility
Next Apr. 13, 2018: Afternoon News in 90