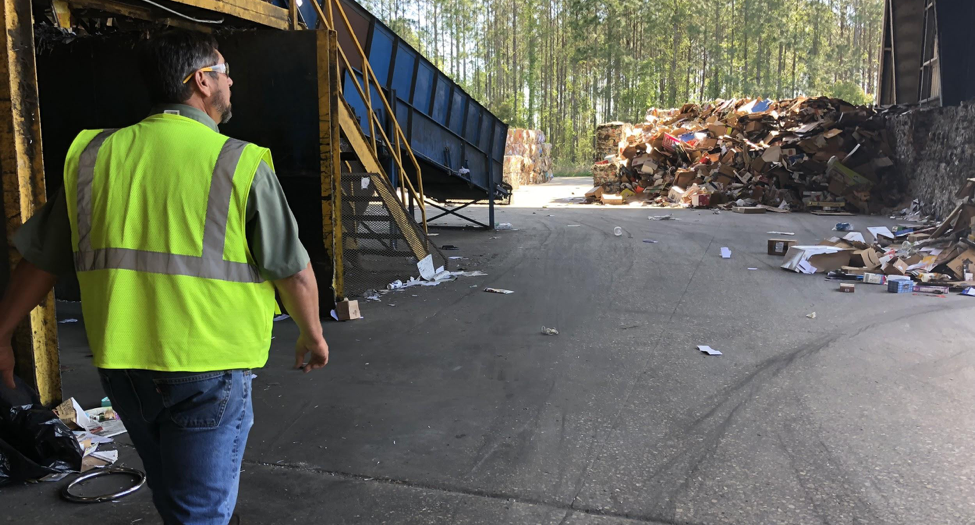 Charles Hobson has 40 years in the recycling industry under his belt.

He got his start as a machine operator and worked his way up to the manager position.

Now he’s working at an Alachua County center that deals with recycling and waste management, which means they deal with what’s known as “wishful recycling.”

Wishful recycling is when a consumer hopes that a good is recyclable and puts it in their collection bin, but in reality, that slows down the recycling operation.

The center processes around 18,000 tons of recyclable material a year.

“It can be really confusing because there are a lot of recycling errors, catching errors on containers and things,” Hobson said. “If you’re not in the industry, you don’t understand.”

Alachua County relies on a dual-stream system, meaning one bin for paper and another for plastic.

“A lot of it is recycling — we just need to get it to the right place,” Hobson said.

Under the current system, five percent of the collected material is contaminated with wishful recycling.

Back in the 1980s, the county used a single stream recycling collection. That caused 30 to 40 percent of the material processed to be unusable.

“When recycling gets delivered to the materials recovery facility there is an expense to drop it. So they pay a fee for however many tons they’re bringing in, dump it off and go on their way,” Irby said.

Irby explains that there is an added cost being absorbed, including sorting fees and garbage processing.

Hobson deals with that impact directly.

At each drop-off station there is a processing fee, which causes the extra cost to start adding up in a big way.

“We want to recycle everything that we can, but unfortunately when there’s a lot of wishful recycling going on, it just increased the cost of that to go to the landfill,” Hobson said.

The county participates in community outreach, specifically through local schools. Irby explains that kids will go home and tell their parents what they learned, passing on the message.

“When it comes to recycling, there’s energy savings, there’s resource savings, there’s saving landfill space, and you don’t have to make a new landfill. There’s all kinds of benefits,”  Irby said. “It’s a great opportunity for us to do a little part at every house.”

Every county has different guidelines for what’s recyclable.

In Alachua County, the center will recycle containers that have a pourable spout or neck up to 2 gallons in size, as well as yogurt cups and margarine tubs.

They ask for residents to rinse these plastics, removing all caps and lids.

More information for any specific questions can be found on this county website link.

Daphna is a reporter at WUFT News who can be reached by calling 352-392-6397 or emailing news@wuft.org.
Previous Haile Farmers Market To Celebrate 20 Years As A Saturday Gathering For Community
Next Anti-Panhandling Ordinance Implemented In St. Augustine