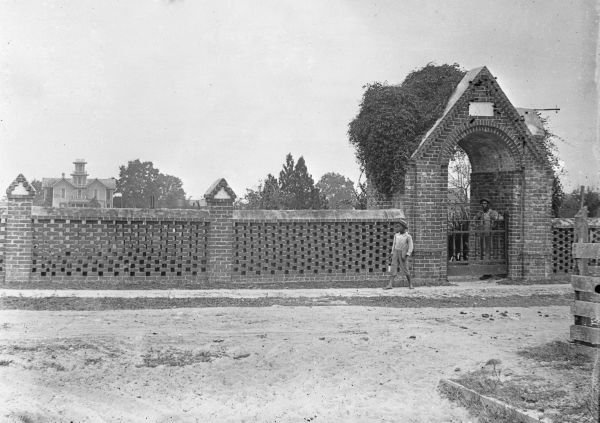 Dr. Lucius Montgomery house, wall and gate, located at 201 W. Smith Ave. during the 1900s. (Photo courtesy of the State Archives of Florida )

As a homage to one of the earliest residents of Micanopy, the Montgomery wall is being repaired in hopes to preserve the town’s historic atmosphere.

The Montgomery wall, located at 201 W. Smith Ave., is all that remains of Dr. Lucius Montgomery’s estate which burned down three times since it was originally built in the 1800s. Montgomery is notable for being one of Micanopy’s first residents. The town was founded after Spain relinquished Florida to the United States in 1821. Later, in 1836, the Battle of Micanopy and the Battle of Welika Pond took place in the town and on Aug. 24, the U.S. Army evacuated the town and all of the buildings were intentionally burned. The town was then rebuilt after the Seminole War, according to micanopytown.com.

The wall has been a part of the town’s culturally built heritage and the community has supported the project with donations in a short amount of time. Its location represents where Montgomery’s homes stood for many years, said Susan Tedrick, president of the Micanopy Historic Preservation Trust board of directors.

“The Montgomery Wall sits upon a preservation easement which is a part of a private parcel where a magnificent Italianate mansion used to stand,” she said. “The wall is a symbol of Micanopy’s rich architectural heritage.”

Montgomery’s name appears in the original Poll Book when the citizens voted on whether to incorporate the town. His first house was destroyed by fire in 1895, the second in 1911 and the last in the 1930s, yet the wall that separated the estate remains somewhat the same. The remnants of the brick wall were reported to have been constructed from the brick used as ballast on an English commercial ship, Jeffrey Forbes, a board member of the trust said.

The wall remained unscathed through the fires and bitter winters of the late 1800s . It wasn’t until the late 1990s when the wall began to change. “A portion of the wall was deconstructed and rebuilt in 1997 by the Micanopy Historic Preservation Trust in order to save it from demolition during a road-widening project,” he said.

After the road-widening project, the wall faced an unfortunate event in the summer of 2015. A thunderstorm caused a live oak tree branch to destroy a 10-foot section of the wall. It also destroyed the western-facing entry gate, according to Forbes.

In order to preserve its authenticity, the trust is managing the wall’s restoration. Aside from fulfilling the ideals of the trust’s mission, the wall provides an iconic link to Micanopy’s historic past, where it immediately ties itself back to one of the first settlers of the town.

“The mission is to save and protect the historic structures and sites of Micanopy and its traditional rural environment,” Forbes said. “To serve as an information resource and to educate its members and the community on the purpose and value of historic preservation.”

The wall not only represents historically rich beauty, it also serves as inspiration for other preservation efforts and restoration projects across town, she said.

The trust plans to repair a 10-foot section of the wall, which is estimated to cost around $2,000. In only two months of fundraising, the community has reached its goal, said Megan D’Andrea, vice president and secretary of the trust.

Although a sufficient amount of money has been raised, there remains a liability insurance issue because the wall is on private property. They are reviewing potential contractors to see which company will provide the highest quality and cost-effective work, she said.

“The insurance thing is just one last hoop to jump through,” D’Andrea said. “Since we have so much community support we are anxious to get the wall repaired so everyone who donated can feel a little pride in what we can accomplish together. Maybe it can inspire future preservation projects here in town.”

The goal of the restoration is to have it completed by May or June, D’Andrea said.

The Micanopy Historic Preservation Trust was founded in 1994 by a local preservation activist Diana Cohen. Her aim was to save and protect the historic structures and the sites of Micanopy and its traditional rural environment. She also wanted to serve as an information resource and educate members and the community on the purpose and the value of historic preservation, according to the trust’s website.

Rennee is a reporter for WUFT News who can be reached by calling 352-392-6397 or emailing news@wuft.org.
Previous A ‘Historic Thrill’: Vintage Aircraft Fly To Promote Armed Services, Aviation
Next Apr. 6, 2018: Afternoon News In 90