By Veronika Vernachio and Hasley Pitman

Invasive plants such as hydrilla and hyacinth pose a mounting concern for homeowners on Lochloosa Lake in Hawthorne.

Jimmy Pease, a Lochloosa fish camp owner, has run his shop on the lake for 14 years and said he used to compete against 17 other camps. Now he is the only one left in business, and it’s all because of the plants, he said.

The plants, which were introduced to the area in the 1960s, according to UF IFAS, were at one point so thick, a person couldn’t even get a small boat out into the water, Pease said.

Having a fish camp with constant traffic off his boat ramp, Pease said he has an easier time managing the invasive plants, but he realizes the battle many of his neighbors face.

Pease’s mother, who lives just North of his camp on the lake, also encountered extreme vegetation growth on her property and paid to have it sprayed and cleared.

“Anybody has the ability to get it sprayed if they have a docking permit,” Pease said.

The remedy proved to be brief, however, because a cold front blew through and reignited the growth.

Marc Wilson, who purchased a home by the lake 18 years ago, said he paid $750 dollars for two hours of work to spray his dock after the 2012 drought. 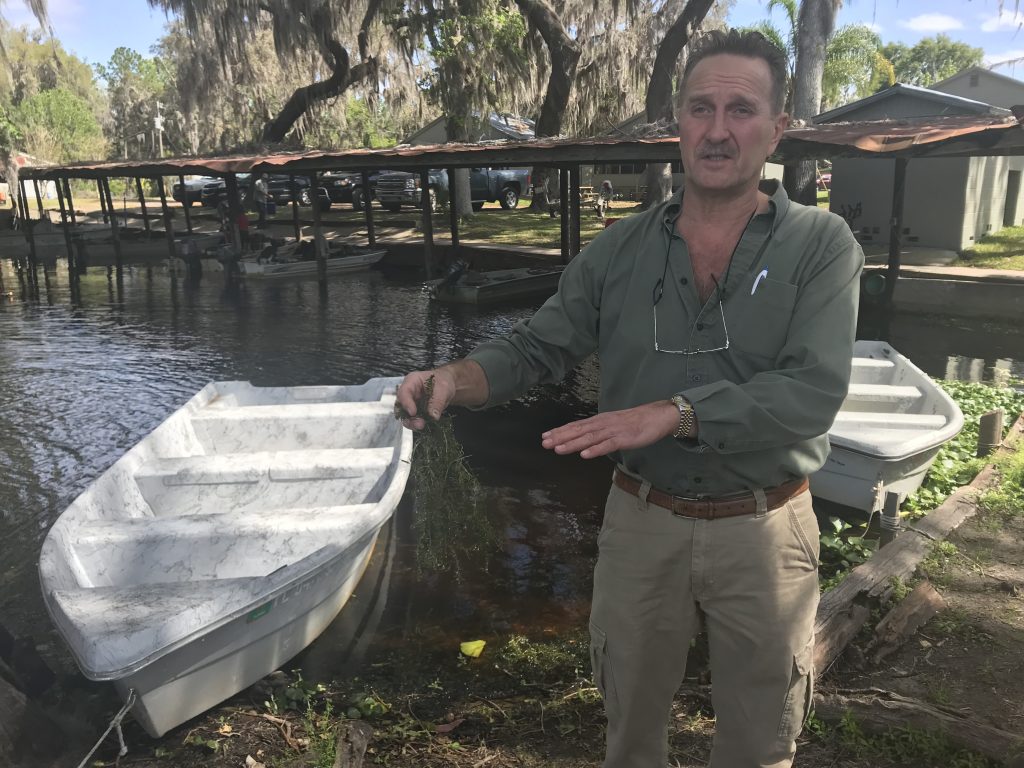 “They sprayed what’s out there, but it doesn’t seem to be diminishing as far as the area…it appears that it’s getting wider,” Wilson said. “Some of it was so tall, I would stand on my tip toes at the end of my dock and not even be able to see over it.”

Although Wilson said he knew the plants were a nuisance, it wasn’t until he received an urgent phone call from his neighbor that he understood the true extent of the problem.

“She called me at 7:30 one morning, and her next door neighbor that lives right on the edge of the lake said, ‘Marc, there’s a huge gator under Jim’s orange tree in the backyard,’” Wilson said.

Wilson said he thinks the overgrowth is the reason for the gator’s appearance.

“There are alligators in natural bodies of water, but we’ve never seen one that close to the shoreline,” Wilson said.

After the alligator incident, Wilson and his neighbors agreed the issue had gotten out of control and contacted the Florida Wildlife Conservation to remove the invasive plants and restore the environment.

Wilson said he has been in contact with the FWC about the vegetation since its return.

In an email to Wilson, the FWC wrote, “I realize you would like to see FWC do more to address the vegetation in this area, but I want to be straightforward in advising you that our agency cannot get into the business of clearing, eliminating or managing native vegetation in areas like this on a local or statewide basis.”

Wilson said he will have to look into other solutions for the invasive plant overgrowth.

“I’m not sure where it’s going to go, but it doesn’t appear that it’s been controlled,” Wilson said.

Previous How An Ocala Stylist Eases Ordeal Of A Haircut For People With Autism
Next April 5, 2018: Afternoon News in 90