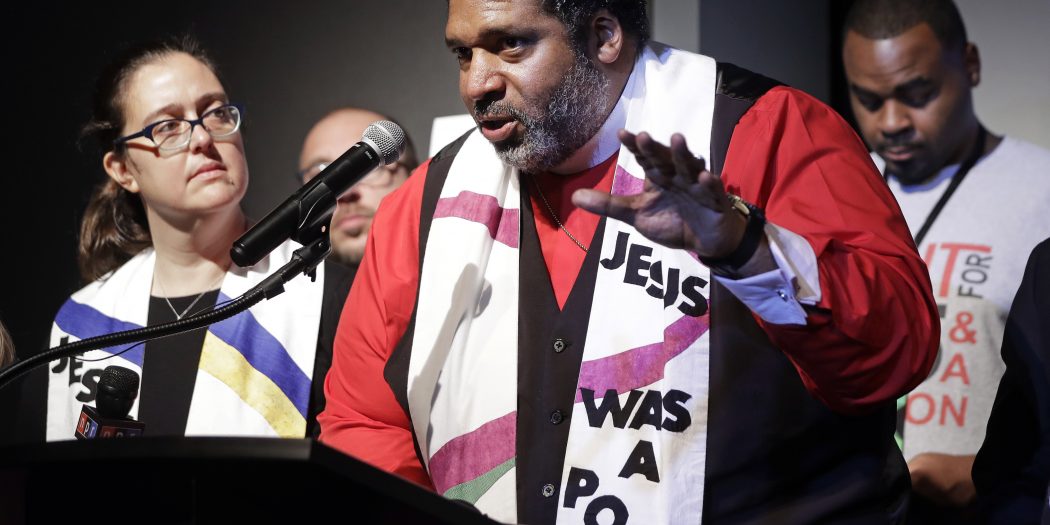 The Rev. Dr. William J. Barber II, center, and Rev. Dr. Liz Theoharis, left, co-chairs of the Poor People's Campaign, speak at the National Civil Rights Museum Tuesday, April 3, 2018, in Memphis, Tenn. They announced the campaign is preparing for 40 days of non-violent "direct action" in about 30 states that will climax with a rally in Washington this June. The organization is the rekindling of the campaign to help poor people that the Rev. Martin Luther King Jr. was working on when he was killed April 4, 1968, in Memphis. (AP Photo/Mark Humphrey)
Home / Government and politics / Rekindling Of King’s ‘Poor People’s Campaign’ Takes Shape

When he was killed 50 years ago, the Rev. Martin Luther King Jr. was working on a campaign to unite poor people of diverse backgrounds to demand better homes, jobs and education.

Now, civil rights leaders are reviving the Poor People’s Campaign with 40 days of marches, sit-ins and other peaceful protests. Organizers of the rekindled campaign discussed their plans Tuesday in Memphis on the eve of the anniversary of King’s death.

Starting May 14, clergy, union members and other activists will take part in the events in about 30 states, targeting Congress and state legislatures. Then, on June 23, organizers plan a large rally in Washington — similar to what King had envisioned. The original Poor People’s Campaign was carried out in 1968 after King’s death by other civil rights leaders.

Barber and the Rev. Liz Theoharis of New York, who started planning the new campaign in December, discussed the details at the National Civil Rights Museum in Memphis, one of several locations holding events commemorating the 50th anniversary of King’s death.

Aside from mobilizing voters, Barber said the revived campaign will call attention to poverty, racism and environmental issues. Organizers plan to release a study later this month on poverty in America over the past five decades.

King had envisioned the Poor People’s Campaign in Washington as a way to speak out against economic injustice, as he shifted his focus from civil rights to human rights. But before he could finish those plans, he came to Memphis in 1968 to support a strike by black sanitation workers who were tired of dealing with low pay and dangerous working conditions.

King led a march in Memphis that turned violent on March 28, and he went back home to Atlanta. Seeking to prove that non-violent protests still worked, King vowed to lead a peaceful march and returned to Memphis days later.

The civil rights leader was standing son the balcony of the old Lorraine Motel when he was shot on April 4, 1968. He died at a hospital at age 39.

The Associated Press is a wire service to which WUFT News subscribes.
Previous April 3, 2018: Morning News In 90
Next Data Back Up AP Poll: Little Progress On Civil Rights Issues