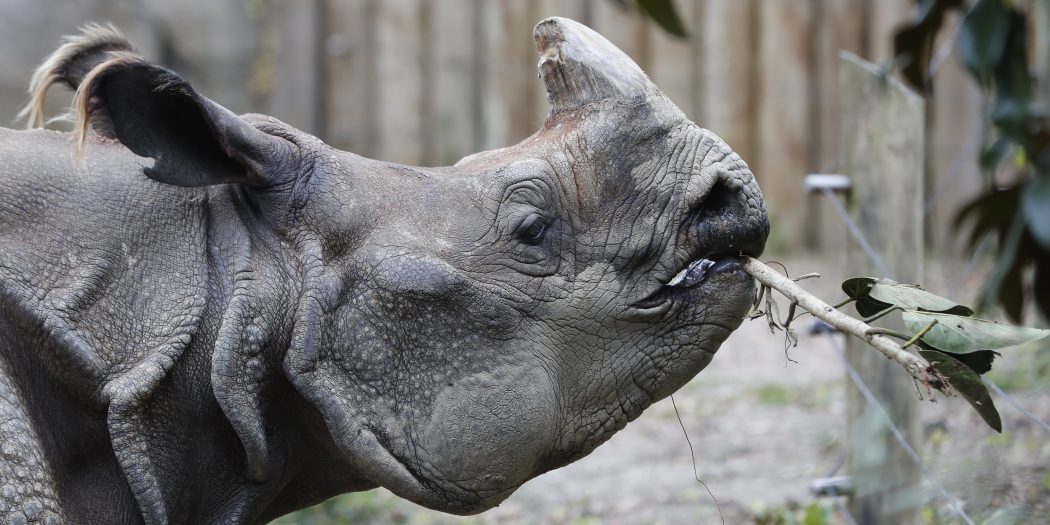 Manjula, an Indian Rhinoceros (Rhinoceros unicornis), chews on a twig in her enclosure at the Cincinnati Zoo & Botanical Garden, Thursday, Nov. 2, 2017, in Cincinnati. The species is listed as vulnerable due to habitat loss and extensive hunting that reduced numbers to less than 600 in the wild in the 1970's. Success conservation efforts increased this number to 4,000 as reported in 2015 by the World Wildlife Fund. (AP Photo/John Minchillo)

The Levy County Planning Commission unanimously voted down an application for a special exception permit to allow the keeping, breeding and raising of exotic animals near Williston, Florida.

Rhudy Holly, owner of Micanopy Zoological Preserve, was looking to bring 299 exotic animals including a rhinoceros and buffalo to about 160 acres of land on the Southwest corner of NE 200th Ave. and NE 10th St.

“After college, I moved here to Micanopy and started really wanting to do something different, something more conducive to conservation,” Holly said. “I learned that there was a huge need for private land owners to help the zoo community with breeding these species.”

If approved, Holly would have moved four Cape buffalo and two Indian rhinos to the property.

Harrell H. Phillips, Jr., a cattleman and veterinarian in Levy and Marion counties, told the board he is opposed to the special exception because he raises cattle adjacent to the proposed property.

“My whole livelihood is across the fence from this establishment,” Phillips said. “Therefore, I’m probably the closest person to be devastated should an exotic animal disease come in to this facility — which could happen.”

Phillips said the stress of moving animals is more likely to render such diseases, which would then harm the health of the surrounding cattle and horses. He also argued that the proposed 16-foot buffer that would contain the animals — in addition to the confined areas — would not be enough.

“No less than 15 phone calls have been on my phone in the last 10 days about livestock being out in a five-mile radius of my house,” Phillips said. “Ninety-nine percent of them were not negligence. They were because of natural causes.”

Oak trees in the area are prone to falling down and will likely do so on the proposed property, especially during hurricane season. Phillips told the board a 100-foot buffer would better contain the exotic animals if the fence was damaged.

“There’s hunting and blasting that goes on very close to this area,” Moss said. “When that happens, we have 10 horses and 10 dogs, and they get spooked and start running. I can’t imagine what a rhino could do.”

The planning commission voted 4-0 against the application as presented based on various uncertainties regarding the business plan and the maintenance of such exotic animals on the proposed amount of land.

“I’m more concerned with what I don’t know, than with what I do know,” said Thomas Harper, Levy County Planning Commission advisory board member for District 2. “I don’t have any concrete data that tells me whether or not the proposed 299 animals, in this mix, fits on the 162 acres and meets safety standards, health standards [or] waste and environmental standards.”

Melanie is a reporter for WUFT News who can be reached by calling 352-392-6397 or emailing news@wuft.org.
Previous Language Barrier Makes Would-Be Hostage Situation More Confusing
Next April 3, 2018: Morning News In 90