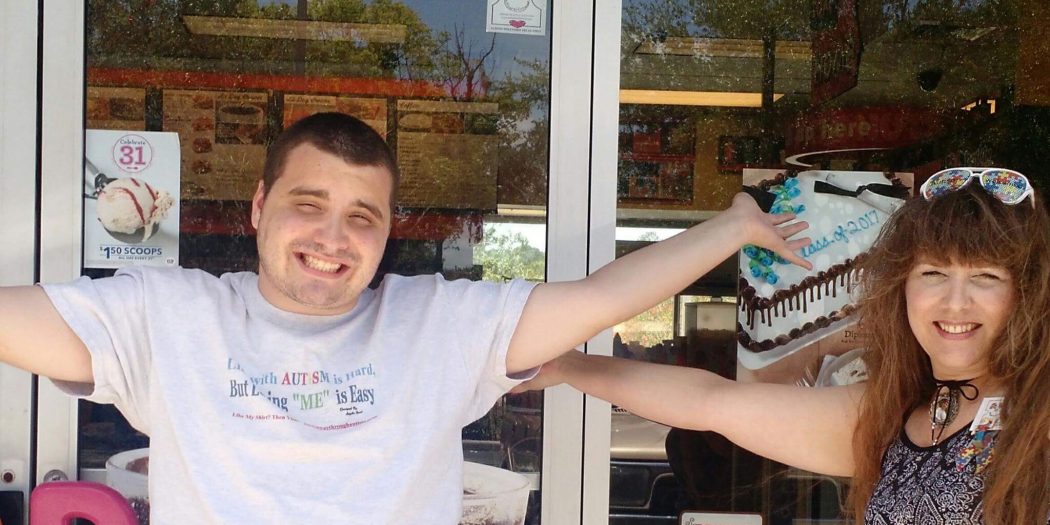 Angela Hart and her 21-year-old son, Dustin, stand in front of a Dunkin' Donuts store with an Autism Welcomed Decal on display. "I really wasn't expecting it to take off like it did,” she said. "It’s a nice welcoming wish come true.” (Photo courtesy of Angela Hart)

When Angela Hart, 49, goes to everyday public places with her 21-year-old autistic son, Dustin, she said she is not always met with a welcoming feeling.

“I was finding it very difficult going into places with him. I felt walking in there I shouldn’t have even bothered,” Hart said.

Inspired by that difficulty, in 2013, the Eustis, Florida, woman decided to create an “Autism Welcomed Decal” that signaled a welcoming and friendly environment. Hart estimates over 100 decals have been put up by business owners, restaurants and other public places across central Florida and even other states.

“We’re just like everybody else, and we want to be able to walk into these places, and not be started at and not be asked to leave,” Hart said.

The first of the decals was put up about four years ago at Lake City Bowl, 347 SW state road 247, where Hart holds an annual event for families with autistic children in July.

Lake City Bowl owner Brian Meek said it doesn’t change the way the business is run, but that he and his employees welcome autistic patrons anytime.

“The sticker on the door hopefully would help those that maybe have a child with autism, who feels sometimes like they’re being distracting to other people around them, that it’s okay to come in with other people here,” Meek said.

“She was happy with the service, and the server took really good care of them and treated them appropriately,” manager Crystal Ratliff said. “That meant a lot to her and her group so she presented us with the sticker.”

Ratliff said she hopes the sticker will indicate that autistic persons will be treated fairly.

“We want them to be able to go out and enjoy their dinner and not have all the stress, the things they deal with in other places,” Ratliff said.

However, for 49-year-old Cheryl Russell, the Alachua County Autism Parent Support Group leader and a parent of an autistic child, thinks without proper personnel training the decal wouldn’t make any difference, as autistic persons are already supposed to be accepted everywhere according to the American Disabilities Act.

“A [sticker] should not make any difference here,” she said. “Unless that sticker comes with an education that teaches each person in that establishment how to respond to a person with disabilities. If [they’re] understanding of what that person’s needs are, then they will know how to respond in certain situations. If they have not been educated, then that sticker doesn’t mean anything.”

A 32-year-old autistic Gainesville resident, whose name has been withheld for privacy, said that although she doesn’t feel unwelcome in public places, she can see how the sticker could be a positive thing for some.

“I think it can be comforting as an autistic person or as a parent of an autistic child to see this sticker and have some confidence that the staff will be respectful,” she said. “But the sticker itself doesn’t ensure a respectful establishment. What are public spaces who use this sticker actually doing to be inclusive of autistic patrons?”

Noise levels and flickering lights don’t communicate a welcoming environment sensory-wise, she said, and most places are not built with the neurology of an autistic person in mind, no matter if there is a sticker on the door.

“If it isn’t sensory friendly, then autism isn’t really welcome there,” she said.

Savannah is a reporter for WUFT News who can be reached by calling 352-392-6397 or emailing news@wuft.org.
Previous Gainesville Russian Community Members Reflect On 2018 Election And Reasons Why They Moved To Florida
Next April 2, 2018: Afternoon News in 90