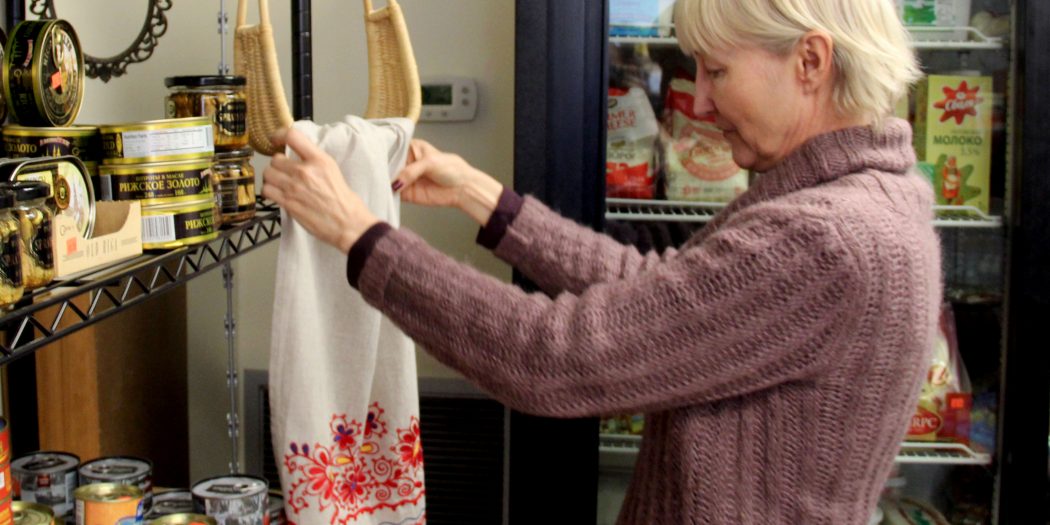 The Russian food store on Northwest 34th Boulevard is one of the markers of the small Russian community in Gainesville.

Many members of this community retain citizenship of the Russian Federation, allowing them to vote in elections like the one Vladimir Putin was reelected in for a fourth term March 18, 2018. Some of them leave family behind, and while some rest assured that keeping someone like Putin in office will ensure stability for their loved ones, others worry about the consequences of him being in power.

Anya Makarchenkova, 22, despite a long list of grievances with the Russian president, agrees with the former. Makarchenkova’s parents still live in her birthplace of Moscow with her younger brother, Michael, whom she left in 2013 to study communications at the College of Central Florida in Ocala. She’s confident that Putin loves his country, and that he would do everything he can to not disappoint his people.

“I don’t think Putin would ever let the country down; he’s so patriotic. I don’t agree with everything that he does, but he’s been president my entire life,” Makarchenkova said. “I don’t know any different, so if I would have to vote, I would vote for him because I know that keeping him in office maintains stability.”

Now, Makarchenkova lives in Gainesville and spends her Saturday afternoon at the front counter of the Gainesville Russian Food International Market & Deli, her computer screen is paused on an episode of Netflix’s Queer Eye. A customer is looking for a specific brand of caviar in the small store’s freezer, and Makarchenkova directs him to the proper door, speaking with a light Russian inflection, no indicator of the short five years she has known how to speak English.

Makarchenkova is sitting in temporarily for Tatiana Gromova, the store’s owner, who has been out sick. Customers expect to see Gromova when they walk in, but Makarchenkova fits in just fine, responding in the familiar tongue to the man, who holds two large trays of red caviar in his hands.

Her smooth transition to the States could not have happened without a little help from her Russian-American friends.

One is Gromova, her “mother figure” away from home, who gives Makarchenkova discounted groceries as thanks for holding down the fort while she has the flu.

She met Gromova through Victoria Novikova, her first Russian friend in the United States.

Before Victoria, most of what Makarchenkova can remember of her first two months in Florida was making emotional international calls to Moscow, telling her parents of how much she missed home.

“It was so hard before I met Vica. I feel like I would have ended up fine, because I know I’m a strong person, but she helped me avoid all the mistakes I would have made without her,” Makarchenkova said.

“Coming from a huge city to a small, rural area felt like downgrading at first,” she laughs. “When I came here, all I knew about Ocala was that it’s the horse capital of the world. I had no idea there was a Russian community around this area at all, especially one this big. There are about 2000 people from the former Soviet Union within Gainesville city limits, and many more live in areas like Ocala and Micanopy.”

“When I move to a new place after Gainesville, I don’t think I’ll try to seek out Russians, not because I don’t love my people, but because I want to step out of my comfort zone,” Makarchenkova said. “Don’t get me wrong, I’m really thankful for this community.”

Makarchenkova idly organizes a stack of business cards that sit next to a Prince Polo chocolate bar a customer must have left behind at the store.

The heading on a white card with blue writing reads, “Svetlana Perron,” and under that, “Student Practitioner of Oriental Medicine.”

Perron left Rostov-on-Don, Russia in 2003 with her two children and former husband, her last attempt to save their marriage, but the pair divorced a year after coming to Gainesville.

Bringing back those memories weighs heavily on her tone, but there’s a noticeable shift when she talks about why she decided to stay.

“My first impression of Gainesville was that people, strangers, asked me, ‘How are you?’ It was a nice shock to see how warm and kind people are,” Perron said.

It’s not only the people, she says, though meeting her second husband, Bob Perron, was a major talking point. However, it’s the democracy that makes living in America so special for her.

“Of course it’s a better life politically here. I am disappointed and sad about Russian politics. People who understand what’s going on, they’re suffering and can’t speak up because it can finish very traumatically and tragically. People who don’t understand, they’re blind and they just follow [Putin’s] dangerous ways, which can bring cruelty and nastiness. It feels like Putin is bringing us in a circle, back to the days of Stalin. There’s no sense in voting. They liquidate everyone who opposes him. There’s only one choice, really,” Perron said.

Perron worries about her family back in Rostov-on-Don, who she does not feel it’s possible to bring to the United States. “My auntie is old, and she and my cousin don’t speak English well,” Perron said.

Perron is getting her second master’s degree in acupuncture at Dragon Rises College of Oriental Medicine and Acupuncture. Her first was in building in construction, which she received at university in Russia.

“I don’t have an easy life but I’m happy that I’m here. I can do what I want. I can start my life over even at 50-something years old,” Perron says. “I can reach a goal, I can express myself. I’m free to do anything I want. This is a major difference.”

Mr. Perron reminds his wife that meeting fellow Russians in Gainesville made her transition much smoother.

“When Svetlana first moved here, she was able to meet a lot of Russians, and that really helped her out quite a bit. When I met her, she was connected with so many Russian people. She introduced me to so many in Gainesville alone,” Mr. Perron said.

Perron agrees, “They helped me find jobs, find a place to live. Tatiana, the owner of the Russian store, was such a blessing to me. She’s a very sweet and supportive person. She gave me advice and gave me work at her store. Now, she’s a patient in my clinic.”

After the Iron Curtain fell in 1991, UF began providing jobs for Russian scientists. Tatiana Gromova, the owner of Gainesville’s sole Russian store, says UF, along with Shands hospital, was instrumental in establishing the Russian-speaking community that has grown to a population of over 2000 today.

Before 1991, there were only three Russian families in Gainesville, Gromova said.

She came to Gainesville as part of a sister-city group that brought Russians from Novorossiysk to the United States and Americans to Russia “for Americans to see what Russians were all about,” and vice versa, Gromova said.

“I was translating for the mayor’s office, so by the time I came here, because of that exchange program, I already knew so many Americans.”

Gromova has newspaper clippings that document her time translating for the mayor’s office, taking them on tours of Moscow and St. Petersburg.

When she came here, though she was assimilated socially, she recalls fondly her first memories of getting to know Gainesville. Gromova pauses price marking the sweets that sit in baskets against the wall next to a map of the former USSR. She points out the seaside city of Odessa, Ukraine, where she lived until she was 10.

“When first I came to Gainesville, I fell in love with the city. Back in the Black Sea area, there was a very popular resort area we would go to every summer, and there were several vacation homes hidden in the woods. Gainesville reminded me of this resort area. If you drive by certain roads, like 16th Avenue, you don’t see houses, just trees. All the houses are hidden. You just see this immense beautiful blue sky and all the greenery,” Gromova said. “My memory of that resort area associated Gainesville with a place where people rest, not where people work. With that, and the warm weather, I felt this was the perfect place to live.”

Like Perron, Gromova felt welcomed by the people of Gainesville. It reminds her of her great-grandmother’s village in Ukraine, where strangers would make eye contact and say, “Hello,” and “How are you?”

It’s also why she loves owning Gainesville Russian Food, the single Eastern European food store in Gainesville, and the third that has existed overall. She bought it from the family who owned it before her. Her family, who still live in Novorossiysk, convinced her to take the chance, telling her it was a perfect opportunity for her.

Gromova knew nothing about owning a business when she first bought the store in February 2017.

She knew it would be hard work, but she’ll always remember playing “store” with her sister as a child in Odessa, and how different the experience from what she imagined.

“When I was little, my sister and I would play ‘house,’ and then when I got older, I got to live that game of ‘house.’ We also played ‘store,’ and now, I’m living that, too,” Gromova said. “As hard as it is sometimes, I love this experience.”

Though much of her family remains in Russia, Gromova prefers not to discuss politics.

“In the store itself, as a policy, I don’t discuss religion or politics,” Gromova said. “It’s a very touchy subject. I’m in the business of selling food, not selling ideas. I may still be a citizen of Russia but in my heart, I am an American citizen. I love this country and the opportunities it has afforded me.”

Isabelle Resnick is a reporter at WUFT News. She can be reached at 352-392-6397 and iresnick@ufl.edu. Follow her at @isabelleresnick on Twitter.
@isabelleresnick
Previous Apr. 2, 2018: Morning News In 90
Next More Central Florida Businesses Display Autism Welcomed Decal

The news that Iran threatened the families of its World Cup soccer team, which refused …