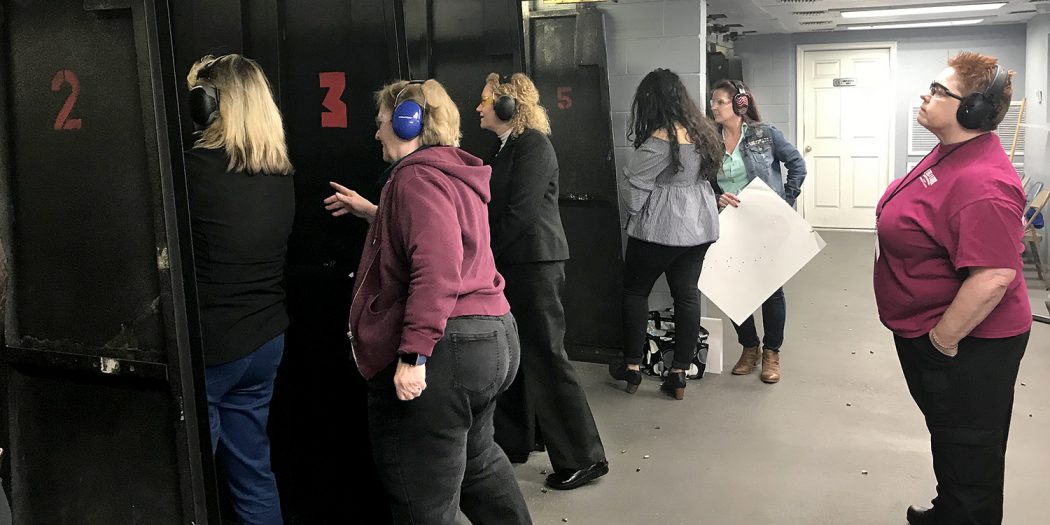 Women from A Girl and A Gun shooting league take target practice during the club's "trigger time" monthly gathering at Harry Beckwith Gun and Range. (Photo courtesy of Michelle Pickett for WUFT)

It’s about the sisterhood — not politics, but rather empowerment and support for one other.

That’s how the co-facilitator of A Girl and A Gun, Michelle Pickett, defined the spirit of Gainesville’s women’s shooting league.

“We don’t discuss basic politics — Republican vs. Democrats vs. Independents — because we have women from all sides of the fence,” she said. “The difference we all agree on is learning how to protect ourselves. We want everyone to feel welcome and important.”

A Girl and A Gun focuses on educating and training women about safe and proper gun use, she said.

Teresa Wilson said that one of the benefits of being a member is the level of support the women have for each other.

“It’s a non-judgmental place to get knowledge, to practice, to learn new things and get new friends,” she said. “If it’s weapon-related or life-related, you can call up on our members and there will be someone there to help you.”

The organization is run out of Pickett’s family-owned gun store and range, Harry Beckwith Gun and Range, located at 12130 South Hwy 441 just north of Micanopy, Florida.  She explained that the club, originally called Well-Armed Women, was organized because a group of women wanted have their own female-oriented classes on proper firearms training. The group changed its name about a year ago to A Girl and A Gun, Pickett said.

“There were so many women taking classes and not asking the questions because they were surrounded by men and felt that they couldn’t ask the questions,” she said.

When the group first started, Dawn Lowe, a member of the group, said she had been relatively new to shooting, but so were the rest of the women.  That helped her become more comfortable with the firearm.

“When I first started training, I was intimidated by male instructors,” Lowe said. “My husband taught me how to shoot, but I didn’t want to embarrass myself in front of his friends.”

She said the group brings different female instructors into meetings to give the members different points of views on how to handle and care for a gun. Pickett added that their training focuses on situational awareness such as the importance of where to sit in a restaurant or how to get out of a parking lot.

“Everything that we do matters,” Pickett said. “Our common goal is to survive.”

“It makes me a more confident person,” Seley said. “It doesn’t make me more paranoid or looking for trouble, but it makes me feel ready to protect myself.”

Heather Swanson, a member of the group, said that her job in real estate motivated her to get involved with the organization.

“I’ve been to places where my cellphone doesn’t work, but I just want to know that I can get home,” she said. “I’d like other people to feel the same confidence that I have, and I feel like I can get out of a situation effectively.”

While the national political debate is not a key focus for the group, Pickett said members recently opened up about the topics. There was a special meeting to discuss the new gun laws and how to protect themselves. Members of the group will travel to the upcoming 2nd Amendment March in Tallahassee on April 14, Pickett said.

There are around 70 members ranging in age from 20 to 80 who meet twice a month to discuss the monthly topic, Pickett said.

The group provides basics of safe gun-handling, range etiquette, proper grip techniques and trigger control and follow through, according to the Harry Beckwith Gun and Range website. The group’s mission is “to educate women on safe and accurate shooting,” but it emphasizes empowerment, support, friendship and self-reliance.

Rennee is a reporter for WUFT News who can be reached by calling 352-392-6397 or emailing news@wuft.org.
Previous Why Not Every Item That You Put in the Bin Can Be Recycled
Next I-75 Research Expects To Address Southwest 20th Avenue Overpass Issues