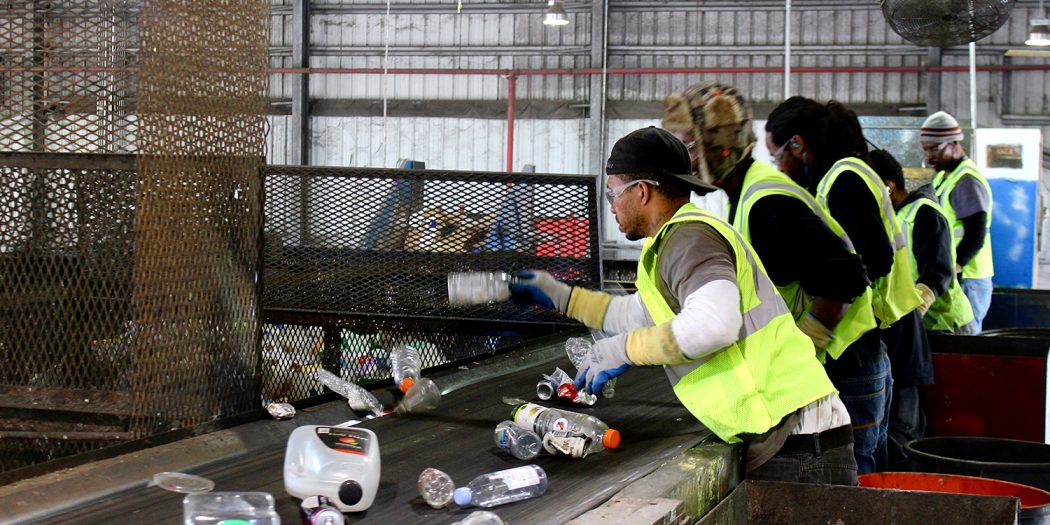 Workers sort out plastics on a conveyor belt at the Materials Recovery Facility on March 13, 2018. (Celeste Cardone/ WUFT News)

This story is a part of Untold Florida, a WUFT series based on audience questions. Don, a reader from Micanopy, asked us, “I am curious about recycling in Alachua County. Is all of the material (all plastics, glass, metal and paper) actually recycled or does some fraction of it end up in the garbage?”

When you place your items in your recycling bin, not all that goes in circles back around.

Jeff Klugh, the recycling program coordinator for the Alachua County Solid Waste and Resource Recovery, says that in the year 2017 alone, the Materials Recovery Facility, where the county’s recycling goes and is sorted, reported 18,229.4 tons of materials are processed at the facility.

According to Charlie Hobson, the Materials Recovery Facility manager for the Alachua County Solid Waste and Resource Recovery, three lines are used to sort recycling materials.

Both fiber products and cardboard are sorted manually from the conveyor belt line. Glass goes through a shaker stream to separate out pieces two and a half inches and larger. An Eddy current uses the magnetic field of a conductor to attract metals, like aluminum, in order to separate out the aluminum products from non-metal materials. For plastics, the process is manually done on a conveyor belt by workers who sort products based on their recycling number, Hobson said.

Even items such as yard waste and tires are recycled at the facility. Tires are ground and used in asphalt or making athletic tracks, Klugh said. Residential curbside yard waste is ground to make mulch, which is free for the public to pick up.

But of the thousands of tons of recycling processed each year by the county, some of those items cannot be recycled, Hobson said.

“A contaminated product cannot be used,” Hobson said. “You decrease the value of the final product.”

For example, an ingredient in a Tide Pod container turns the bottle color orange. But this color additive makes the product no longer recyclable.

Last year, the facility saw a contamination rate of 7.09 percent for the total tons of recycling items received by the facility, Hobson said. This year, that number has increased to around 9.5 percent.

According to Hobson, products with certain resin codes numbers, commonly referred to as a recycling number, may contain contaminants or additives that make it hard for a product to be recycled. In particular, items with numbers three, six and seven may end up in the landfill.

“We used to be able to recycle these kinds of plastics,” Hobson said. “But the markets for them are now no longer available.”

The unrecyclable items that do end up in the landfill come at a cost. More trips than necessary are made by garbage trucks from the facility to the landfill. On top of extra trips, it costs $98 per ton to bring non-recyclable material to the landfill.

In neighboring Marion County, as a comparison, the contamination rate also remains between 5 and 9 percent. According to Larry Starkey, the Solid Waste Operations Manager for the county, the low percentage is a result of their switch to a single-stream process. The single-stream process means residents are able to throw all of their recyclable items into one bin instead of two separate ones. The county also no longer recycles glass.

“It makes it easier for people to recycle,” Starkey said.

Marion County also has a 5 to 7 percent increase in citizens’ participation rate in the recycling program. The county used educational programs in schools that teach children about recycling.

“We’ve had parents call us saying their children listened to the presentation and now are getting them to recycle as well,” he said.

As for Hobson, he understands the importance of education, which he thinks may help to lower the Alachua County contamination rate.

“It’s [about] trying to keep it easy for people,” he said. “Being aware of what you buy and knowing what can be recycled, it all starts with education.”

“I recycle all of the paper I have — glass bottles, cans, even the plastic box cookies come in,” Mathison said. “It’s important to save your trash.”

Celeste is a reporter for WUFT News who can be reached by calling 352-392-6397 or emailing news@wuft.org.
Previous March 28, 2018: Morning News In 90
Next Women’s Shooting League Builds Fellowship, Empowerment