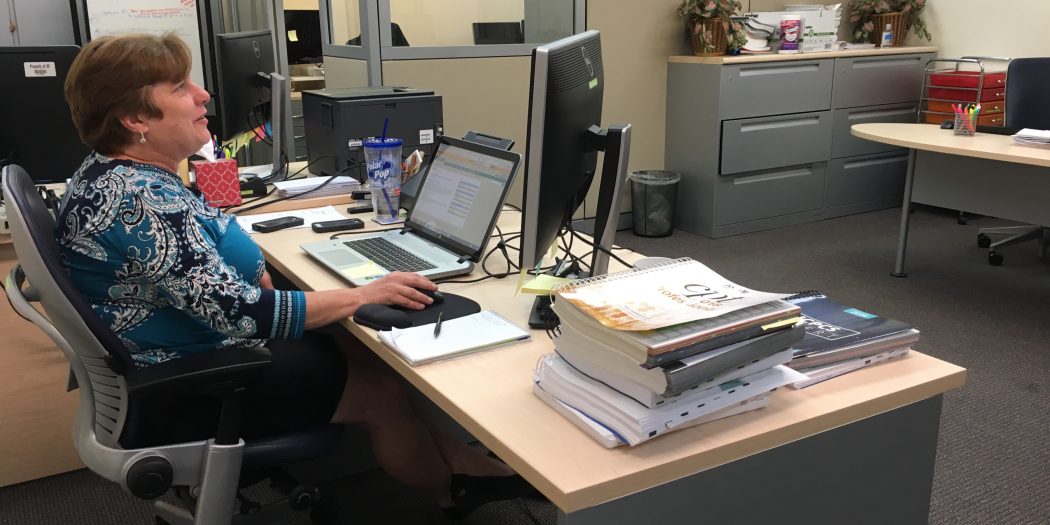 Tracy Jones, office manager for NeatBiz Solutions, works at her desk in the Center for Innovation and Economic Development. All five employees at the startup share this office space. (Ellen Andreu / WUFT News)

Santa Fe College is planning to construct a $31 million three-story development to replace the current Center for Innovation and Economic Development on University Avenue and Sixth Street in Gainesville.

The expansion will triple space for business incubators, said Dug Jones, the college’s associate vice president for economic development. The center is one of three buildings that make up the Blount Center campus.

“We’ve recently developed the opportunity to expand the campus here,” Jones said. “The vision is for this campus to be able to accommodate more students, particularly in East Gainesville.”

According to the expansion plans, the new facility would offer 15 college-credit certificates, 14 associate of science and five bachelor of applied science degrees.

There are currently 25 startups at the center, but only seven have office space, Jones said. The new building would expand the business incubator office space and academic programs for business and information technology.

Ravi Bhosale, CEO of NeatBiz Solutions, an accounting and bookkeeping service, operates his business from the center with a staff of four. The space is sufficient for five people, but with the expectation of growth, he said, a bigger facility would be ideal.

“I would hope for a space, at least, for 10 people,” he said. “We are expecting to double (staff) within the next couple of years.”

He said the center’s location, next to the bus stop, is perfect for his staff.

Jones said that during construction many of the startups would move to the college’s Gainesville Technology Entrepreneurship Center in east Gainesville.

The college has already raised about $17 million from donations, two different appropriations from the Florida Legislature and a grant from the U.S. Economic Development Administration. Jones said the remaining $14 million should be secured within the next year.

“Our current plan is to bring all the information technology and business programs that are currently housed at our northwest campus and move them to the Blount Center,” she said.

“We just hired an architect,” Calhoun said. “We haven’t even designed plans for the building, all we’ve really done is the master planning process.”

“One of the construction managers coined this,” she said. “Where east meets west and the idea that we could create a space where our Gainesville residents could come and gain the skills that they need to be a part of this innovation culture.”

Calhoun said she hopes to meet with the architect from Harvard Jolly Architecture in the next couple weeks.

“We are still two years out before we would be close to a finished process,” she said.