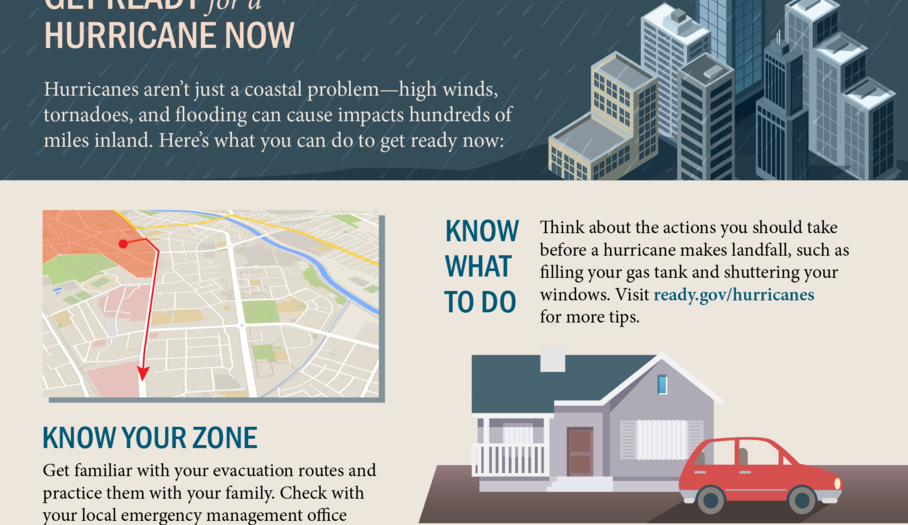 FEMA encourages residents to know their evacuation zones and know what do if an evacuation order is made. (Provided by FEMA News Photo)

Two months before the official start of hurricane season, the Federal Emergency Management Agency is stressing the importance of being prepared early.

Noting that three hurricanes — Hermine, Matthew and Irma — tore through the state during the last two seasons, FEMA spokesman John Mills said it is imperative for Floridians to start preparing their emergency kits now.

“It’s really important for people to know that hurricane season is less than three months away,” he said. “It’s time for families to get ready now.”

Some supplies households might need include enough food and water to last between three and five days, gas, charged phones, flashlights, medicine, pet food and a radio. A full list of needed supplies is available via the Ready Campaign.

Mills said that one thing every Floridian can do is buy flood insurance. He said even if a family does not live in a flood zone, anywhere there is rain, there is a chance for floods.

“Insurance is really your first line of defense,” he said. “Insurance can really help people rebuild and rebuild faster.”

To purchase insurance, Mills recommends seeing an agent and visiting the FEMA website. He said those residents who currently have flood insurance should review their policies to see exactly what they cover.

While FEMA and insurance companies provide assistance after a disaster, when a major storm hits it is important for people to be prepared. Mills said some communities across Florida learned the hard way after Hurricane Irma in 2017, which impacted almost the entire state.

“The more preparedness people can build into their daily lives, the more you’ll be able to help your neighbors in their time of need, whether it’s a hurricane or something else happening,” Mills said.

Camie Lewis, a FEMA digital communications specialist, recommends downloading the FEMA app. It gives tips on preparing for a storm, weather alerts and information on shelters.

“A great idea is to show your parents, show your grandparents how to download this app, how to use it and how to navigate it so that they can get the important information that they need to prepare for the upcoming hurricane season.”

Andrew Kennedy, Jacksonville National Weather Service meteorologist, said that preparing early is important because hurricane season can start early. Tropical and subtropical storms can form as early as May or June, well before the season’s September peak, he said.

These storms, he said, while they may not be as strong as Hurricanes Matthew or Irma, can still cause damage to homes and infrastructure.

The impacts of hurricanes and tropical storms, such as tornadoes, storm surge, and flooding, can extend far from the center of the storm. Kennedy said this is why it is important to prepare if a person finds him or herself in the forecast cone of uncertainty.

“A hurricane is not a point,” he said. “It is a large area of showers and even storms that covers hundreds — and sometimes well over a thousand — miles from the center.”

Bryan is a reporter for WUFT News who can be reached by calling 352-392-6397 or emailing news@wuft.org.
Previous March 27, 2018: Morning News In 90
Next UPD Active Shooter Training In High Demand