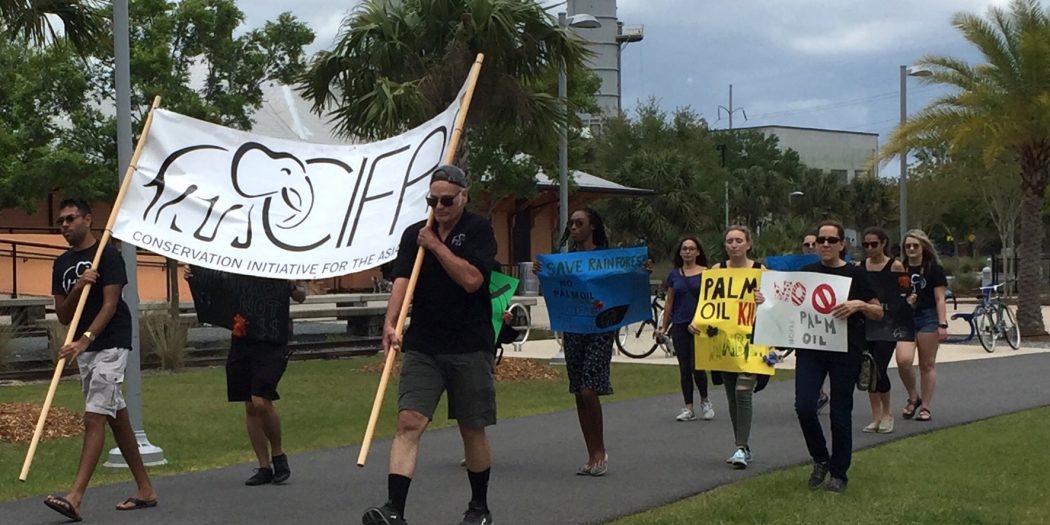 A Gainesville organization marched around Depot Park on Sunday to advocate against the consumption of palm oil.

The group, Conservation Initiative for the Asian Elephant, is passionate about boycotting products that contain palm oil in them, and hope this march will highlight the destruction the plant brings.

Julia Jeanty, the general manager of CIFAE who has been involved in the organization for about two and half years, said there really are not any sustainable practices when it comes to the production of palm oil as of now.

“Destructive behaviors are used to cultivate palm oil, such as deforestation and slash and burn agriculture,” Jeanty said. “This leads to elephants and other animals suffocating, being burned alive and general displacement.”

Jeanty also said the organization has been actively posting on their Facebook page about the dangers of palm oil on the environment and said that they created an “Eat this, not that” campaign to illustrate how to substitute palm oil for other products.

According to the website, saynotopalmoil.com, palm oil is a type of vegetable oil from the palm fruit, which grows on the African oil palm tree. Although originally from West Africa, these plants today are grown throughout Africa, Asia, and North and South America, with 85 percent of it globally produced and exported from Indonesia and Malaysia. This single oil is found in about 40 to 50 percent of household products, such as baked goods, shampoo, cosmetics, detergents and toothpaste. In other words, it’s a product that is hard to avoid.

“It’s sneaky. It’s in so much of our food that it’s hard to find something else,” said Alex Ender, a graduate student at the University of Florida studying creative writing. Ender is not a member of CIFAE, but rather heard about the event and decided to show his support.

“I just showed up, they’re [CIFAE] all over town,” Ender said. “They’re at the farmer’s markets and VegFest.” Ender said that there are very few organizations that are local and bringing awareness to this issue.

According to their website, CIFAE is a non-profit group based in Gainesville, Florida, with the mission of identifying and addressing issues concerning the sustainability of the Asian elephant and its habitat. The organization was founded in 2000 by Ron Chandler and Amirthraj C. Williams. Chandler is the interim director of sustainability studies and visiting professor in the department of psychology at UF. He said after traveling to Africa he learned a lot about the African elephant, and wanted to learn more about how to help them.

“Christy Williams [large animal biologist] from WWF [World Wildlife Fund] wrote me and said ‘have you ever thought about Asian elephants’,” Chandler said. “And I said whoever needs the most help, let’s help them.” According to Chandler, although African elephants are in danger of poachers, Asian elephants are far fewer in population. The biggest reason? Palm oil.

According to worldwildlife.org, burning is the most common method for clearing the area to plant palm oil. Because of this, smoke and carbon dioxide are released into the air, polluting the environment and air quality for the surrounding wildlife. Also clearing the area destroys the homes and habitats for animals such as elephants and orangutans.

“We don’t want to take a terribly adversarial approach,” Chandler said. “The number one thing somebody can do is just look at a product, see if it contains palm oil in it, set it down and find something else.”

Although the turnout for the march was quite low (between 10 and 15 people total showed up), CIFAE is hopeful that next year will be even better. This was their first annual march against palm oil, and they plan to do it every year. 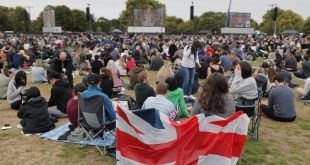 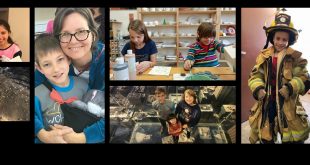 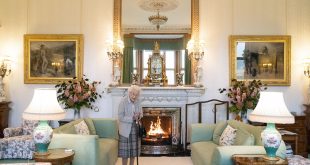