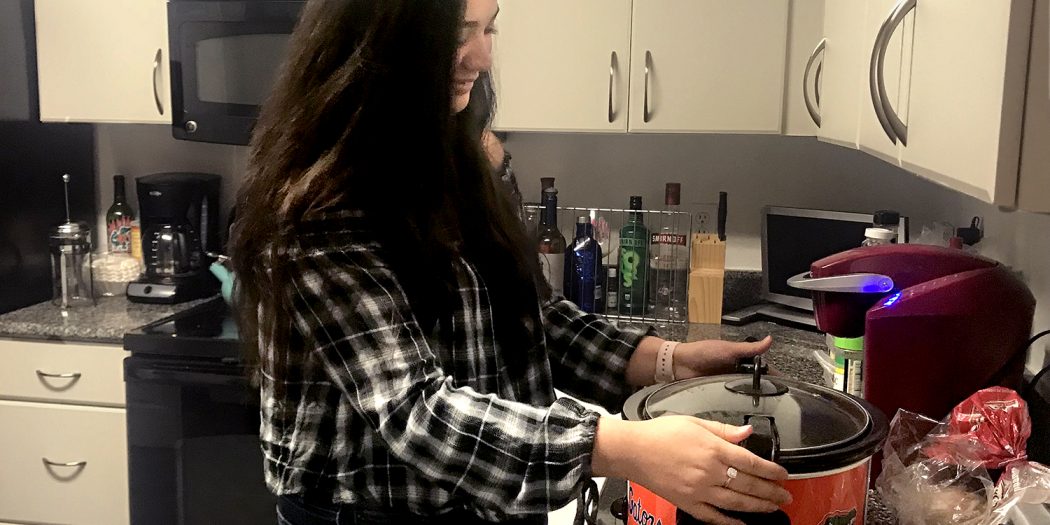 Danielle Sapp, a second-year health science major at the University of Florida sets her slow-cooker to medium heat so that her beef stew will be ready when she gets home from her last class of the day. (Jamie Shapiro / WUFT News)

Every morning before leaving for class, Danielle Sapp eats a blueberry breakfast bar, makes sure she packs her laptop charger and turns off her air-conditioning unit.

Sapp, a second-year health sciences major at the University of Florida is currently a resident of the Nook apartments off of 34th Street in the Butler Plaza area.

“I’ve been trying to find ways to keep my utility bill down,” she said. “I turn off my AC whenever I know no one’s going to be home for a while so that we aren’t charged for cooling an apartment nobody’s in.”

Sapp, like many others in these off-campus apartment complexes, is worried about cost. Each month she dreads checking her online rental account, afraid to see how much she racked up in utility bills.

“All my money’s already going toward tuition and rent, so having this random charge that can be anywhere from $2 to around $30 every month is a huge stressor,” she said. “That could be a week’s worth of groceries.”

Sapp lives in one of the many apartment complexes surrounding Gainesville’s Butler Plaza area that cater to college students. The Nook, along with complexes like The Enclave, Gainesville Place and Campus Lodge, all include monthly utilities with their rent payments, up to a certain amount, which are referred to as “caps.” According to the Enclave website, this cap ranges between $40 and $50 each month, and residents must pay for the excess usage at the end of the month. Other apartment complexes, such as Stoneridge Apartments and Oxford Manor Apartments, are not structured as caps-inclusive and instead require tenants to arrange individual accounts with Gainesville Regional Utilities for separate monthly billing.

Second-year UF psychology student Scarlet Zimmerman understands how the utility caps work. Living at Campus Lodge, she and her roommates each have a $40 utility cap that they’ve never exceeded. Zimmerman is aware that certain things like heating the water for her laundry and leaving lights on when she isn’t home would raise her bill, so she avoids them at all costs.

Zimmerman describes herself as fairly conscious of what’s turned on in her apartment. One exception to her lights-out policy is the heating lamp she keeps on for her lizard, Freddie, at all times. “Other than that I conserve pretty well, I guess,” she said.

Sapp sometimes feels her fluctuating monthly bills are the result of GRU jacking up the rates.  However, Maureen Murtha, a media specialist with GRU, said that higher monthly costs by tenants can actually be avoided.

The main cause of price changes in monthly utility bills is the cost of fuels like coal, she said. These are at-cost commodities that GRU bills to their customers, without any increase. Another large factor is usage, which is something that can be controlled by residents.

“Usage changes,” Murtha said. “It changes with the kinds of devices, electric using devices, in our home.”

Residents tend to use appliances to their full capacity, such as using the range oven to cook rather than a compact toaster oven. Things like this can add up and result in a higher monthly utility bill, Ruth said.

“I’ve heard a lot of crazy stories about how people think they got these overages,” he said. “But there’s no fact or really any basis to prove that on.”

Ruth explained that keeping appliances up to date and exercising common sense can help save a few dollars every month. Turning lights off when leaving the apartment, something often overlooked by rushed college students, can impact monthly electric bills.

GRU bills also include water and wastewater, which can contribute to higher bills, Murtha said. “Those five to ten extra minutes in the shower might be awesome,” she said. “But you’re paying for them.”

According to both Ruth and Murtha, one misconception on how to lower costs is by turning off the air conditioning unit when no one is home.

“When you turn off your AC during the day the temperature will fluctuate by several degrees,” Ruth said. “When you come home and turn the unit back on, it usually has to change by five or more degrees over the course of a few hours to get back to a comfortable temperature.”

This ends up costing more than if the air conditioning unit was set to a seasonally appropriate setting at all times, he said.

“When setting your AC, 78 degrees is pretty much where you want to be in the heat of the summer,” Murtha said. “In the winter we would say keep it at 68.”

“We really are just a phone call away,” Murtha said.

Jamie is a reporter for WUFT News who can be reached by calling 352-392-6397 or emailing news@wuft.org.
Previous Concerns Of Health Risks From Advanced Meter Radio Waves Debunked
Next Mar. 23, 2018: Afternoon News In 90