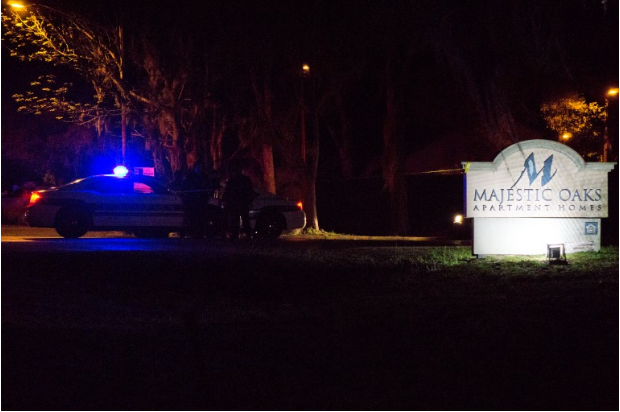 Updated, March 28, 2018: Less than a week after the hearing, the Alachua County Sheriff’s Office decided to settle, according to WCJB.

A lawsuit stemming from that shooting is still pending in circuit civil court and on Thursday, three attorneys met to argue the validity of compensation for damages that law enforcement caused when officers shot and killed Dentmond. One of the lawyers in attendance, Robert Rush, represents Shirley Johnson, whose apartment was damaged in the shooting from the Gainesville Police Department and the Alachua County Sheriff’s Office.

Rush said there was a better course of action that could have been taken.

“I think the least use of force necessary is always the best course of action and lethal force is always tragic because you end up with somebody dead,” Rush said, “and that’s the end of it.”

The Gainesville Police Department was on the scene to assist the Alachua County’s Sheriff’s Office, in whose jurisdiction Majestic Oaks is located.

City of Gainesville litigation attorney Liz Waratuke said the court should dismiss Johnson’s case. She said the decisions made on that day are a part of standard government procedure.

“Government has to do certain things as government,” she said. “One of the quintessential functions of government is responding to an emergency situation and making decisions based on that.”

Thursday’s proceeding focused on determining if Gainesville’s law enforcement made decisions based on negligence.

Waratuke also said an insurance payout to Johnson has already been addressed.

“This is someone who was in an apartment that had some property damage, which the Sheriff’s Office has already taken care of, so I do not know why that particular issue is being pursued with this particular individual.”

Waratuke said others have been paid as well. In total, the Alachua County Sherrif’s Office has paid $14,000 in insurance claims to six people whose property suffered damages as a result of the shooting.

Judge Donna M. Keim did not immediately rule on Thursday but will decide in the near future whether or not the case will proceed to trial.

Jawanza is a reporter for WUFT News who can be reached by emailing news@wuft.org or calling 352-392-6397.
Previous Decision Delayed on Future of Saint Michael’s Episcopal Church
Next Panel of Female Community Leaders Speak At PACE Center For Girls