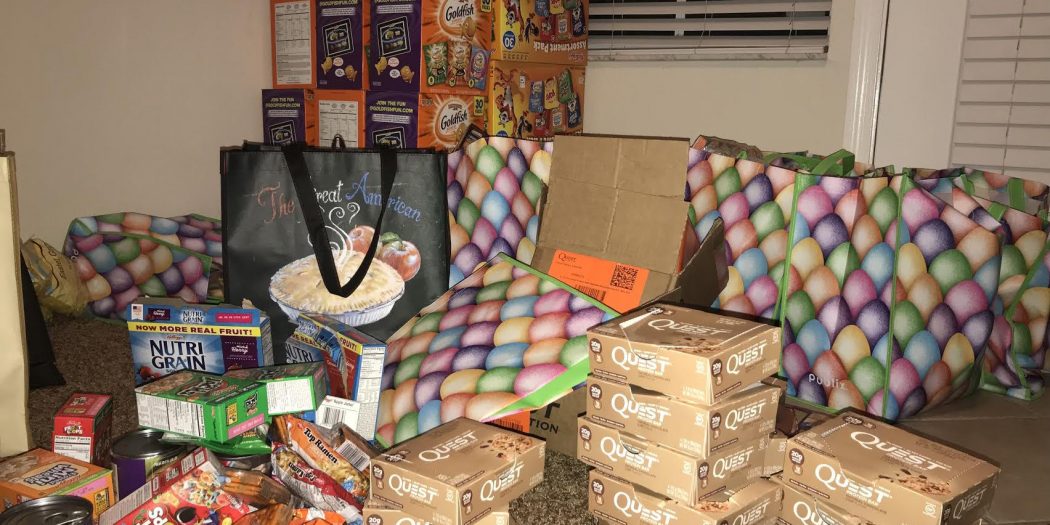 A kindergartener’s stomach grumbles in a local preschool.

His stomach aches not because it’s lunchtime, but because he didn’t have anything to eat today.

He turned to an intern volunteering in his classroom, Carly Girnun, and told her his hunger is causing him pain. Girnun rushed to the school’s administration to see if this boy had anything to eat.

“I found out he didn’t have food at home available to him,” she said. “I got in my car and cried. I just felt like I had to do something.”

This little boy is not alone.

He is one of many kids in the county, state, and country who don’t have sufficient access to food resources. About one million children in Florida are food insecure compared to 16 million children nationwide, according to Robin Safley, the executive director of Feeding Florida.

Girnun is an intern with Peaceful Paths, a domestic abuse treatment center in Gainesville that sends student interns to work with children at schools in high risk, low-income areas.

One of the schools, One Room School House, enrolls 200 elementary school students, where 75 percent of children qualify for free and reduced lunch, according to the school’s founder Neil Drake.

While children are given two meals and a snack every school day at One Room School House, Drake said they are not supplied school food over break.

“Nobody is going to suffer at school,” he said. “We do not have anyone going hungry here because no one would let that happen. We are small enough that if someone is complaining that they didn’t get breakfast, it gets taken care of. But, we don’t have any control over what their food situation is over break.”

Most of these kids are food insecure, which Safley said, is a result of lack of access to healthy or nutritious food.

“When you look at hunger and healthy eating access, it all comes down to affordability, availability, and education,” Safley said.

A LiveStories report from 2016 stated that six percent of Alachua County residents live with low incomes and low access to food stores.

The spring break baskets will keep kids full over break, Girnun said. Each one is stuffed with a $20 Walmart gift card, enough food items to last the child a week and a list of nutritional, affordable foods to help low-income families shop smarter.

The baskets are loaded with healthy snacks like Quest bars, multi-grain snacks, boxes of brown rice pasta, and canned meats and vegetables.

“Right now there are so many kids who need it,” said Girnun, a third-year psychology student at the University of Florida.

Girnun received money and food donations from people in the local community and across the country. She took to social media to spread the word about the project. In the first day, she said she raised $1,000 and has been working on putting together 40 baskets.

She collected private donations via Venmo and purchased the items at a local Walmart. She said some family and friends who saw her Facebook post even shipped food to Gainesville for her to donate.

“I never expected for it to take off like this,” she said. “When I raised $70 the first day, I was crying of excitement that I could help a couple families. Now, I am going to be able to help about 40 families in the community.”

Laura Dawson, internship coordinator at Peaceful Paths, worked with Girnun on setting up the initiative.

Since most of these kids rely on school food, these baskets will keep kids from going hungry over the break, Dawson said.

“There are children out there who do need these things,” she said. “This is super helpful to families who might not have as much.”

After collecting and shopping for two weeks, Girnun plans to deliver the baskets to the schools today, March 22, before children will leave for the break on March 26.

“It has been extremely emotional in the most incredible way possible,” she said.  “Sometimes it is easy to forget about all the good in the world with all the hate spread around the internet, but this reminded me how beautiful and incredible the people are that I am surrounded by.”

Besides raising money and food for the kids, Girnun said she hopes this project raises awareness about child hunger.

“Food and water are the two most basic necessities that every human in the world should have,” she said. “Some kids are going without a basic need that we take for granted. We all complain that we are hungry, but there are actually kids in our own backyard who are starving, and it is such an important thing to recognize and realize.”

Meredith is a reporter who can be contacted by calling 352-392-6397 or emailing news@wuft.org.
Previous Santa Fe College President Becomes A Student For A Day
Next Morning News in 90: March 22, 2018