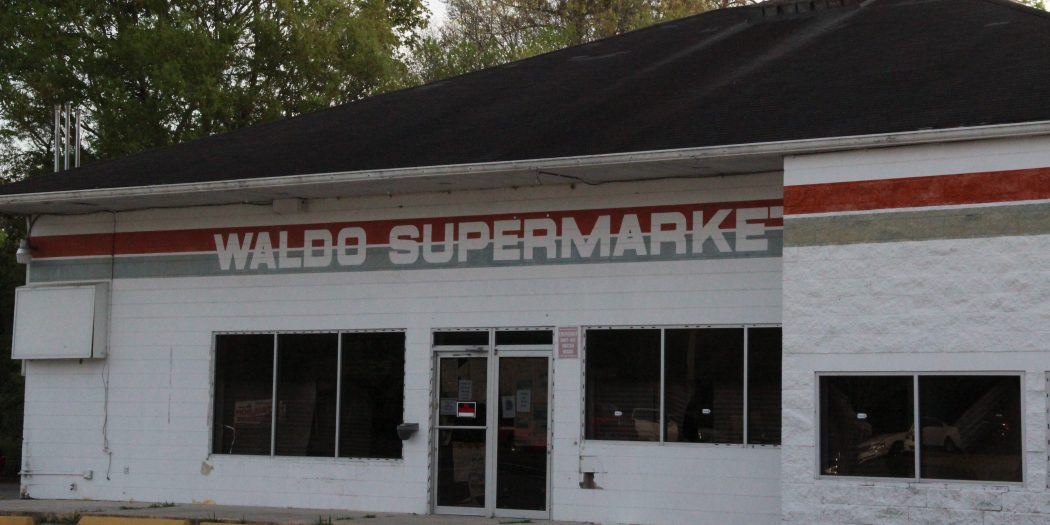 The Waldo Supermarket, located in the center of town, opened in 1998 but is now closed.

According to Kelly Davidson, adjunct faculty in the UF/IFAS Food and Resource Economics Department, a food-desert situation can be caused by both household income and limited access to markets and grocery stores, making it harder for people to maintain a healthy diet.

“The United States Department of Agriculture has measurements that are dependent on the number of people that live in a low-income area and are far from a supermarket, which might be a Walmart Supercenter or a Publix or a smaller supermarket,” Davidson said. “Basically it comes down to the level of income of the household, but also the neighborhood and the access to a store, such as the distance to a store or the number of stores in an area.”

Waldo, Florida, is not considered officially as a food desert on the USDA’s most updated food desert map from 2015. However, the city has a limited amount of options for grocery shopping.

The nearest place to purchase healthy food is the Waldo Farmers and Flea Market, which is only open from 8 a.m. to 4:30 p.m. on Saturday and Sunday. The next two closest places where Waldo residents can buy healthy food are not even located in Waldo. The Walmart Supercenter in Starke is about a 20-minute drive from Waldo, and Harvey’s Supermarket in Melrose is roughly a 25-minute drive.

That being said, availability of healthy food options is limited for Waldo residents during the week if they are without a vehicle since gas station quick stops rarely offer healthy food.

Waldo resident Jason Floyd said accessibility to healthy food is definitely a big issue in the Waldo area, especially for residents without access to a car.

“Honestly the closest place to get healthy food, like vegetables, is Starke,” Floyd said. “Other than the flea market which is only open on the weekends and doesn’t even accept SNAP.”

Floyd said people generally purchase frozen foods and canned goods with their Supplemental Nutrition Assistance Program (SNAP) cards, instead of healthier foods, since the stores that accept SNAP in Waldo aren’t the types of stores that typically carry more fresh options like fresh fruits and vegetables.

Currently there are four locations in Waldo that do accept SNAP, three of which are gas stations. The Sunshine Food Mart, located in the BP gas station at 15295 US-301, Dollar General at 17481 NE US Highway 301, Waldo Quick Stop, and the Pilot Travel Center in the Pilot gas station at 17276 NE US Hwy 301.

Lower-income families living in Waldo might face difficulties getting access to healthy food option in case they do not have a vehicle or rely on SNAP benefits.

In an attempt to combat the poverty in Alachua, the Alachua County public schools food and nutrition services offer free meals to anyone 18 years and younger during the summer months. These meals are offered at designated locations around the county.

The Waldo Community School was Waldo’s location for the summer meals program until the school closed in 2015, said Caron Rowe, Marketing and Promotions Food Service Specialist for Alachua County public schools Food and Nutrition Services. Now the closest available place for Waldo children and teens to get their free summer meals is in Hawthorne, located about 20 miles away.

The summer of 2014, before Waldo Community School shut down, the school served a total of 708 summer meals, 324 breakfasts, and 384 lunches, Rowe said.

For impoverished children in need of healthy food during the summer when they are unable to receive free food at school these summer meals are helpful. Now, not all families are able to make the 20-minute drive.

As of right now, it is too early to know where the closest location serving summer meals for this upcoming summer will be in relation to Waldo. However, Rowe said the local church offered to host summer meals in the past and may be willing to do so again.

“If someone were to have some sort of summer program [in Waldo] then they could certainly contact us and we would work with them on getting food there if it was feasible,” Rowe said.

Jasmine is a reporter for WUFT News who can be reached by calling 352-392-6397 or emailing news@wuft.org.
Previous From Parkland to Gainesville to D.C., Follow WUFT’s Coverage of ‘March For Our Lives’
Next March 22, 2018: Afternoon News in 90

Following the creation of a tiny house resort and the addition of a market, Homestead …