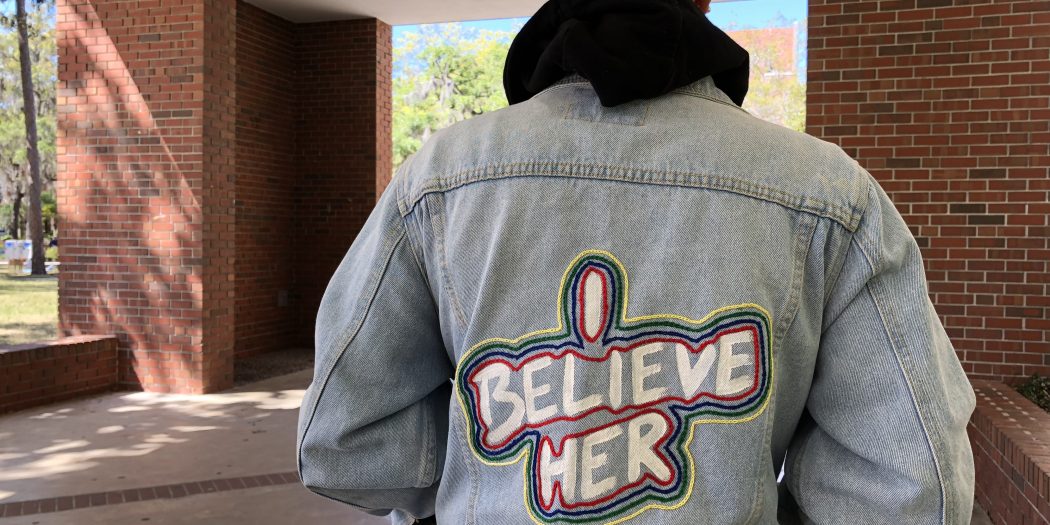 A University of Florida English and theatre major has found a way of coping with the aftermath of sexual assault – she embroiders denim jackets with colorful sentiments and then sells them to customers around the world.

The designer, Kelsa, or K Spooks, as she is known to her customers, first got the idea to create the jackets back in November 2017. She has only sold a few but has gotten more orders after being featured in a video on NowThis News.

The first jacket Kelsa created included the saying “I Believe Her,” pertaining to her own assault. However, she works with her customers to create other sentiments such as “Girl Gang,”

“Here and Queer” and just about any saying that can fit on the back of a jacket.

Instead of selling through online shops, she only takes orders through her Instagram page.

“I sell on Instagram as a way to create an authentic exchange with my customers,” she said. “I like them to get a look into who I am.”

Kelsa sells the jackets for $175, but if you send your own jacket the embroidery will only cost you $100. However, if her customers have trouble with the price range, she works with them to make it more affordable.

Most of what she makes on the jackets go toward the materials used, the jacket itself and the time it takes to make them. She also donates 10 percent of the proceeds from each sale to Planned Parenthood.

“Planned Parenthood is such an important and vital source of healthcare,” she said. “With the way health care is now, we need to protect it at all costs.”

While Planned Parenthood is the only organization she’s currently donating to, she said she hopes to collaborate on designs with organizations that she’s passionate about.

“In the future, I’d like to collaborate with other brands that have my vision in mind,” she said. “I would never want my jackets to become mainstream and have people lose sight of the cause.”

Although Kelsa has had to deal with the difficulty of her assault, she believes that the circumstance has connected her to a network of the most incredible people she’s ever known.

“I’m a survivor,” she said. “That network of support is why I’m open and honest about difficult topics such as assault.”

Danielle Donovan, who is from California, was prepping for the Los Angeles Women’s March back in January when she came across the jackets on an Instagram explore page.

“I read that some of the proceeds of the jackets go toward public health,” she said. “I felt the need to have something in my closet that I could wear and loudly support women with whenever I wore it.”

“It’s definitely started conversations in public places with strangers, and behind closed doors with my family and friends,” she said.

She said she gets compliments on the jacket wherever she goes out, which gives her a confidence boost.

“Given our current government, it’s important for us to have crucial conversations,” she said. “I am grateful that this jacket helps me do that in an easy, lighthearted way.”

Annie, a 20-year-old college student from Tampa, discovered K Spook’s designs after she was featured on NowThis News.

She chose the original “I Believe Her” design because she feels it is so important to bring justice to the victims of sexual assault.

“So often assaults are never reported to police, trials are never conducted, and nobody is found guilty,” she said. “People need to start taking survivors of sexual assault seriously.”

She said she wants people to stop thinking of women who report an assault as “the girl who cried wolf.”

“When I wear this jacket I feel that survivors see me as an ally,” she said. “For people who don’t understand what it means, it gives me a chance to inform them of the injustices that occur far, far too often.”

She said that she wears her jacket proudly for the people in her life who have been sexually assaulted and hopes the message can make people learn about the injustices that exist around them.

“I hope that I can’t go a day without seeing one of her jackets on the streets,” she said. “I hope that the messages behind her jackets can bring about this change we so desperately need.”

Annie said that she encourages all to become an activist for the causes they believe in.

“Don’t sit back and hope for the best,” she said. “Preach your concerns. Be a part of the change and help work towards a better society.”

*WUFT agreed to withhold Kelsa’s and Annie’s last names to protect their identity.

Isa is a reporter for WUFT News who can be reached by calling 352-392-6397 or emailing news@wuft.org.
Previous Main Street Alachua To Be Rebranded As Community Hub
Next ‘The Amazing Give’ Supports Local Nonprofits With 24-Hour Fundraiser