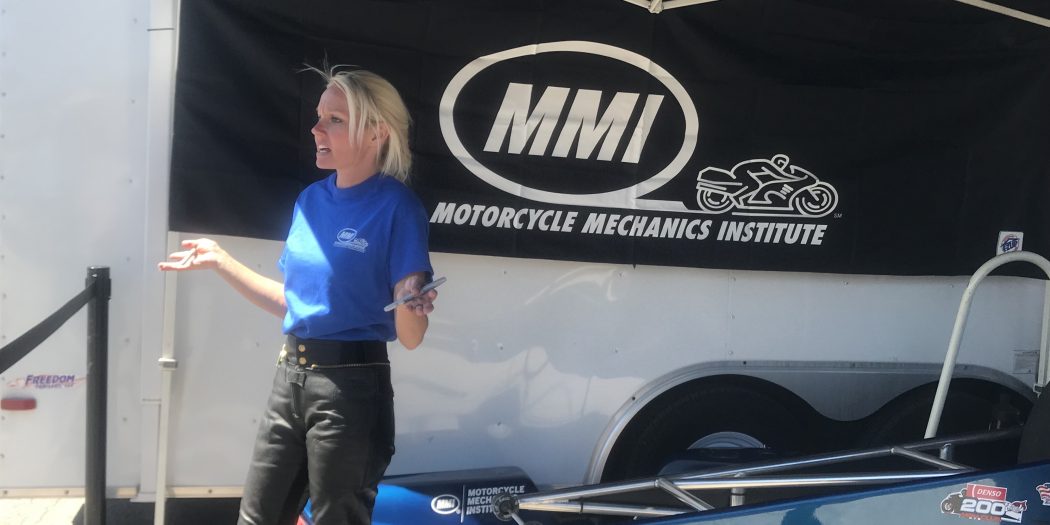 Rawlings Vying For Spot At Gatornationals

Weighing in at 104 pounds, she is the smallest racer competing in Gatornationals, the National Hot Rod Association’s annual drag racing tournament in Gainesville.

This is the 49th year of the races, which kicked off today at the Gainesville Raceway.

After riding in her first race of the day, Rawlings, 38, from Gillette, Wyoming, felt confident she would qualify in the top 16 in her second season as a pro stock motorcyclist.

Rawlings  and her crew attend races all over the country. Gatornationals is their first stop of the season. After a rough start to her pro racing career in 2017, she is hopeful for a better 2018.

“A lot of guys have been out doing this for 20 to 25 years,” said her husband and pit crew chief, Chad Rawlings. “We aren’t hanging with the top dogs yet, but it’s not going to take us very long to get to that spot.”

The annual drag racing spectacle draws large crowds to North Central Florida for the weekend. Hotels in the area have been booked for weeks according to Calvin Davis, who drove nine hours from Nashville.

“It’s like a mini vacation for me,” Davis said. “We come down every few years to watch the cars and spend all day walking around the grounds.”

The first of sixteen pro stock motorcycle races began today at noon and run through Sunday.

With one race under her belt, Rawlings still has several more to go to earn a spot in the top sixteen and continue moving forward on the racing circuit.

“Here at the Gators, we know we have the potential to be in the field with the smallest rider, the smallest motor and really make it happen,” she said.

Despite three football teams having to quarantine due to a positive COVID-19 test, officials from Alachua County Public Schools remain optimistic about the protocols they have in place.