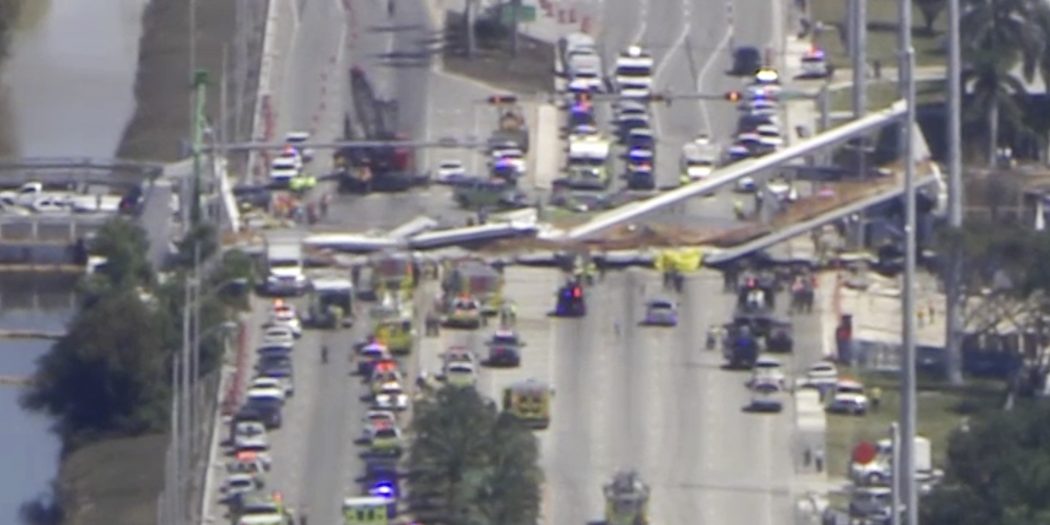 In this frame from video, emergency personnel work at the scene of a collapsed bridge in the Miami area, Thursday, March 15, 2018. (WPLG-TV via AP)

A brand-new pedestrian bridge collapsed onto a highway at a Miami-area college Thursday, crushing at least five vehicles.

Several people were seen being loaded into ambulances and authorities said they were searching for people.

There was no immediate report of injuries or any fatalities from authorities.

Gov. Rick Scott tweeted that he had spoken with Miami-Dade County Police Chief Juan Perez about the bridge collapse at Florida International University.

“I will be in constant communication with law enforcement throughout the day,” the governor said.

The 950-ton span was installed on Saturday. The main part of the 174-foot span was assembled by the side of the road while support towers were built at either end.

Firetrucks, police and other emergency vehicles were at the scene.

The $14.2 million bridge crossed over a busy seven-lane road that divided the university’s campus from the city of Sweetwater.

The Associated Press is a wire service to which WUFT News subscribes.
Previous Meridian Behavioral Healthcare Expanding Due To Increased Needs
Next Alachua Conservation Trust Seeking To Preserve More Of The Santa Fe River