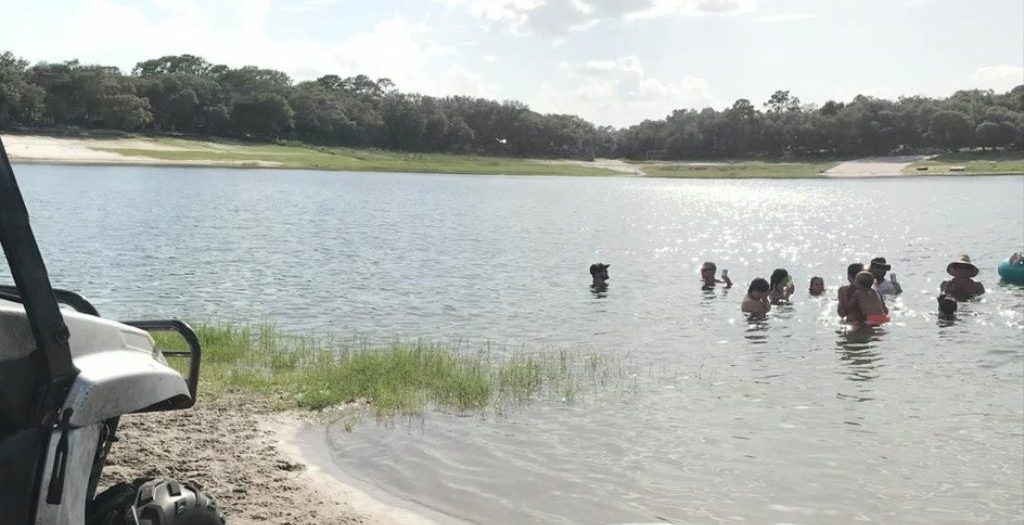 Residents of Keystone Heights swim in the water of Lake Geneva on a hot summer day. (Photo courtesy of Summer Shepherd)

Bambi Hernandez tries to sleep, but the noise is simply too loud. It’s 3 a.m. on a Monday morning, and just 300 yards from her pillow, a party is in full swing.

Drunken hollers and the roar of lifted trucks billow from the dried up lakebeds of Lake Geneva. Hernandez tries to ignore the commotion, but considers calling the police when the chaos doesn’t stop, she said.

“All hours of the night you can hear it,” Hernandez said. “They tear up the ground and it’s just horrible.”

Just three months after the Clay County Commission banned motor vehicles from driving at night on the dry lakebeds of Lake Brooklyn and Lake Geneva, some residents of Keystone Heights are complaining that nothing has changed.

“Obviously people aren’t listening to the ordinance,” Hernandez said. “I don’t mind them being out there, but at that time of night? It’s crazy.”

Steve Brown, a Keystone Heights city council member, said his assembly receives complaints from residents about loud vehicles and gunshots coming from the large patches of land where the lake water once flowed.

While the city council has no jurisdiction over the lakebeds, they are in full support of the commission’s ordinance to ban motor vehicles at night, Brown said.

“You’ve got four-wheelers out there flying across the lakebed through grass that’s in some places 8 feet tall,” Brown said. “How nobody has gotten seriously hurt, nobody knows.”

Bullet casings are found in some residents’ yards while others have their land torn up by truck drivers doing donuts, Brown said. Living only a few blocks from the lakebeds, there are times when even he hears the commotion, he said.

“People don’t want to move here and spend money on a lake house where they can’t get any sleep at night,” Brown said. “Besides the loud music and the partyin’, there has been a safety concern with it as well.”

Along with safety, Brown is concerned that the lake environment could be severely damaged also, he said. The Florida aquifer that supplies millions with clean drinking water could easily be contaminated with oil, transmission fluid and gas, he said.

“There’s a level of respect that I don’t see people having,” Brown said.

Keith Smith, a public information officer for the Clay County Sheriff’s office, said that the county has recently put up no trespassing signs along the shorelines of the lakes. The sheriff department is also beginning to increase their presence through Operation Safe Streets, where officers will be randomly patrolling on all-terrain vehicles, he said.

“Obviously the residents want to keep the lakebeds as safe and as undisturbed as they can,” Smith said. “Hopefully in time, we’ll get everything in order like it should be.”

Within the last week, officers have already used four-wheeled drive vehicles to patrol the lakebeds at night, and are planning for more random patrols in the near future, Smith said.

“Hopefully, as time goes by and word gets out that we’re out there, we can make some resolution that everybody’s happy with,” Smith said.

Summer Shepherd, a resident of Keystone Heights for 23 years, lives along the shoreline of Lake Brooklyn. She spends almost every summer weekend drinking with family and friends on the patches of land where water once covered the earth.

“Every now and then someone would get too drunk and we’d have incidents,” Shepherd said. “But it’s hard for law enforcement to get on the lake bed. If there’s any issues, nobody can get to them.”

As water levels in the Keystone lakes fall, the patches of land are exposed that are only accessible by four-wheel drive, Shepherd said. Even after the Clay County commission banned the use of motorized vehicles after dark, police are still having difficulty reaching the parties, she said.

“They would try and have an officer on foot come over, which really isn’t effective when you have people on four-wheelers,” Shepherd said.

While Shepherd and her friends like having a good time, they continue to notice litter scattered around the lakebeds, Shepherd said. Trying to avoid any negative environmental impacts, the group always brings trash bags and cleans up after their gatherings.

“But there’s a lot of people that don’t do that,” Shepherd said. “It’s just gross.”

While the commission’s decision has helped in quieting the lake region, there is still some improvement that needs to be made, Shepherd said.

“I don’t think it deters anybody who wants to go out there and party, truthfully,” Shepherd said. “It’s a small town, so you can usually find out who’s been riding through your backyard.”

Max is a reporter for WUFT News who can be reached by calling 352-392-6397 or emailing news@wuft.org.
Previous WUFT Hosts Debate Between 2018 City Commission Candidates
Next High Levels of Pollen To Continue Over Next Several Days