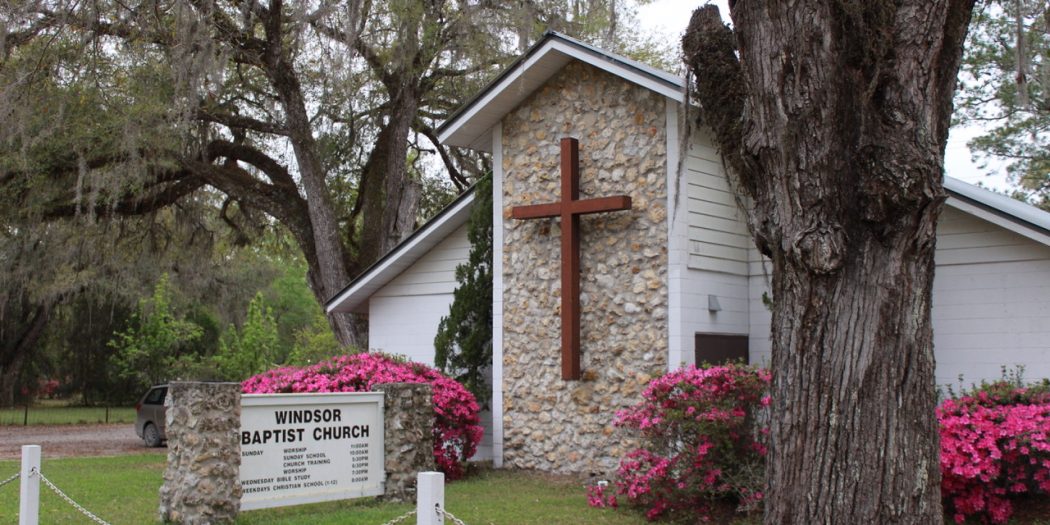 Jim Arnett grew up attending Windsor Baptist Church, 918 SE County Road 234, and helped build it when he was 16.

For Windsor And Rochelle, Citrus And Weather Shaped Future

Less than 15 miles east from central Gainesville along County Road 234, Windsor and Rochelle are quiet towns that carry secrets of their former history.

Once developed hubs for the citrus industry, these two communities now bear little resemblance to the agricultural centers they were in the mid-19th century. Instead, today they boast small-town values and fellowship as well as sleepy oak-canopied dirt roads.

In 1846, English cotton planters established Windsor, and residents flooded in with the promise of citrus development. By the end of the Reconstruction period in the 1890s, the town of about 75 had its own doctor, three stores, a real estate office, a grist mill, two sawmills, and a post office, according to the Alachua County Historical Commission.

Less than three miles away, Rochelle was also established in the 1840s as Perry Junction, named after the fourth governor of Florida, according to Historic Alachua County, history preservation initiative maintained by the City of Gainesville and Department of Parks, Recreation and Cultural Affairs. Families from Georgia and South Carolina, including the Perry, Rochelle, Tillman, and Zetrouer families, were the earliest settlers there.

In 1881, Rochelle became known as Gruelle, and the year after it became a hub for the Florida Southern Railway. Eventually it became a daily stop between Jacksonville and St. Petersburg on the main line of the Plant Railway System. The town of about 100 residents saw about 24 trains a day by 1988.

Gruelle changed its name to Rochelle in 1884, named after Perry’s wife’s parents, according to the historical records. Along with Windsor, the two towns became major players in the citrus industry, with Alachua County being one of the largest orange-producing regions of the country in the late 19th century, said University of Florida history professor Steve Noll.

That is, until the temperatures began to plummet in December 1884. The freeze was longer and deeper than it had been in years, leaving many of the orange trees to die, said Noll.

Yet, the trees seemed to recover momentarily, and warmer weather brought blossoms once more, until yet another impact freeze in Florida in February 1895 when temperatures dipped to 10 degrees. This destroyed the hopes of the citrus industry for almost two decades, according to Florida Memory, the website for the state library and archives.

These two great freezes changed everything, as many residents abandoned the towns, leaving both frozen in time.

Some remaining residents in both towns have persisted. And they say they’re fine that the small citrus centers didn’t experience the same growth that Gainesville did.

“I personally would not like development. I’ve seen it and we get a different kind of people that didn’t grow up here and they have different kinds of values. It changes the settings and the tone of the community,” said Rochelle resident John R. Nix.

Nix, 65, is fourth-generation in this town of about 75. His maternal great-grandfather, Albert Hall, was brought there as a slave with the Perry Family from North Carolina, and then sold to the Zetrouers. After he gained his freedom, he selected the surname “Hall” because he could spell it, Nix said.

Hall became one of the few black landowners in the area with about 250 acres in his possession. Today, Nix still farms and owns cattle that roam on 65 acres of the original property.

“The towns kind of dried up, but we still have the core descendants of the core families,” Nix said.

Nix’s grandparents lived in Rochelle and he visited them every week on Sunday to attend church services. On the first and third Sunday of the month, he went to the local Baptist church, and on the second and fourth Sunday, he went to Hall Chapel United Methodist, the church his great-grandfather built almost 139 years ago, he said.

Even after he grew up and went away for school, Nix returned often and finally settled, with his wife Angie, in the house right next to the original Hall home. The couple has three grown daughters, one of whom he even named after the town.

“The community has been really really good as far as building character,” Nix said. “It’s been very rewarding to me to live here and have family in this small town.”

Jim Arnette, Windsor’s fire chief emeritus, feels the same about his small town of about 256, according to the 2010 census.

“It’s home, you know. The people, [I] wouldn’t trade them for anything – warts and all,” he said. “These are people I’ve grown up with.”

Arnette was raised in Alachua County and visited his grandparents in Windsor as an adolescent. He has lived there since 1976.

“It’s a beautiful place, you just have to get to know it. It’s got its own character – and characters.”

Arnette described growing up in the mostly dirt-road community as fun, from driving his tractor over to his grandparents’ house and stopping at the local corner store if he had money. There, the owner carried RC Colas, moon pies, and frozen candy.

At 15, he helped build the Windsor Baptist Church that he attends right across from the fire station that he helped establish. Because Windsor was so far out, and with the nearest ambulance about 10 miles away in Hawthorne, the town had to provide its own fire service.

Arnette and his wife, a former EMT, used to volunteer their services to the community, and many Windsor residents still call the couple for help instead of dialing 911, he said.

With the previously low budget that the Windsor Fire Department received, the annual Zucchini Festival in May helps to raise money for capital expenses for the station, like trucks.

The smaller budget and the distance away from everything is the only downside, Arnette said.

Savannah is a reporter for WUFT News who can be reached by calling 352-392-6397 or emailing news@wuft.org.
Previous Morning News in 90: March 15, 2018
Next Plans For Development Near Northwest Gainesville Walmart On Hold To Balance Environmental Interests