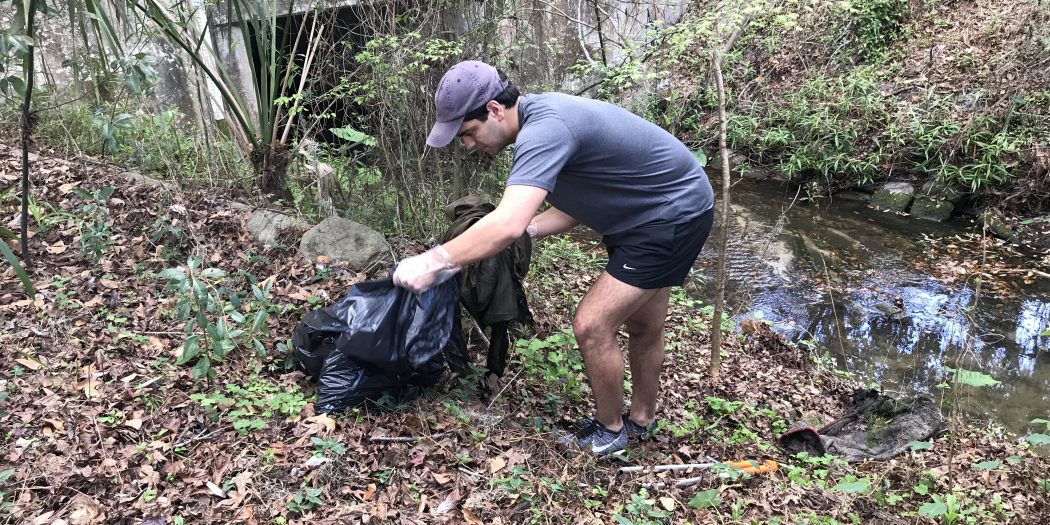 With the sun beating down and the wind beginning to blow, volunteers are heard exclaiming what they have found as they begin work on the Sweetwater Branch Cleanup project. Within a half hour after they begin, large black trash bags begin to pile in the center of the children’s playground. Among the rubble that has been scavenged deep within the creek and beneath overgrown foliage are golf clubs, sofa cushions, bicycle tires and pots.

In the recent years Sweetwater Branch Creek along University Avenue and 4th Avenue has become a forgotten park and littered waterway. Now volunteers are trying to clean up the creek that flows through the downtown area of Gainesville, located between the Matheson History Museum Complex and the Alachua County Library District Headquarters.

Jason Wilhem, 43, a native of Kentucky, moved to Northwest Gainesville 14 years ago. His interest in Sweetwater Branch began with a walk through the park. His childhood memories of playing in creeks when he lived in Kentucky were rekindled at Sweetwater, and he pondered all of its possibilities.

“Unfortunately, time has caught up to it,” Wilhem said about the park’s decline.

But he couldn’t stand for that. He wanted it to be fixed.

“I didn’t want to sit idle, so I posed the question to myself, ‘do I make phone calls or say nothing?’” Wilhem said. First, he dialed the phone number on the city park sign, then he called the City of Gainesville’s Parks & Recreation director. He finally caught up with District 1 City Commissioner Charles Goston.

With the help of Gina Hawkins, Keep Alachua County Beautiful director, Wilhem was able to schedule a clean-up event for the part of Sweetwater Branch.

Cleaning up communities is a chance for economic development and investment, she added.

“Businesses want to invest in places that are attractive. Our environment is our economy,” she said. “Our goal is to return the area to the public. Right now, no one wants to come and enjoy the park.”

Authorities are monitoring bacteria levels at Sweetwater Branch with six monitoring stations, intended to measure and report on the condition of Sweetwater Branch over a long period of time, according to Chris Bird, Alachua County Environmental Protection Department director.

Monitoring bacteria levels includes determining the factors that can affect the creek, including measuring urban activities happening around and near the creek as well as sewage spills, according to Bird.

Human and animal wastes are a primary source of bacteria in the water. These sources of bacterial contamination include rainwater runoff, pet wastes, roadkill and septic tanks.

“Levels bounce all over but it all adds up to bacteria loading into the creek,” Bird said.

Bacteria levels of the creek differ upstream and downstream. Upstream levels tend to be lower as downstream the levels are higher, due to urban impacts, according to Bird.

While upstream the water flows at a slower rate into Paynes Prairie and does not have as many urban environmental factors, vegetation slows down the process of bacteria entering the creek or multiplying in numbers, Bird said.

“There isn’t a fast track to how the bacteria enters the creek,” he noted.

The Sweetwater monitoring station located at 4th Avenue, near the Gainesville Regional Utilities John R. Kelly Generating Station plant, might have an effect on the bacteria levels downstream as well. “[The water] being treated at the plant doesn’t necessarily have bacteria in it because [the water] has been chlorinated, but the volume of water is discharging into the creek and affects the flow of the creek itself, therefore the bacteria levels may be higher.”

“Our city, roads, and storm-water drainage system has replaced green space with concrete. With flooding concerns, much of the water drains into the creek. Creating this draining system has created a pathway for bacteria to enter the creek,” Bird said.

The continued industrialization of the downtown Gainesville area has also been a factor of bacteria levels, according to Bird.

“The creeks can be deceptive. Visually it may look better but it’s also important that the water is safe,” Bird said.

But volunteers believe the opportunity to clean-up and rehabilitate the property will make it a place for all to enjoy and take an interest in.

Each time volunteers make their way back to the children’s playground with filled bags of trash, Wilhem cheers and claps, knowing they are closer to that goal.

“I want to bring this up with even bigger powers in government. I want to see things grow here, let’s make this an area where people walk their dogs and kids play,” Wilhem said.

Brianna is a reporter for WUFT News who can be reached by calling 352-392-6397 or emailing news@wuft.org.
Previous March 1, 2018: Afternoon News In 90
Next Once Empty, US Army Reserve Center Land Gets Unique Park Update