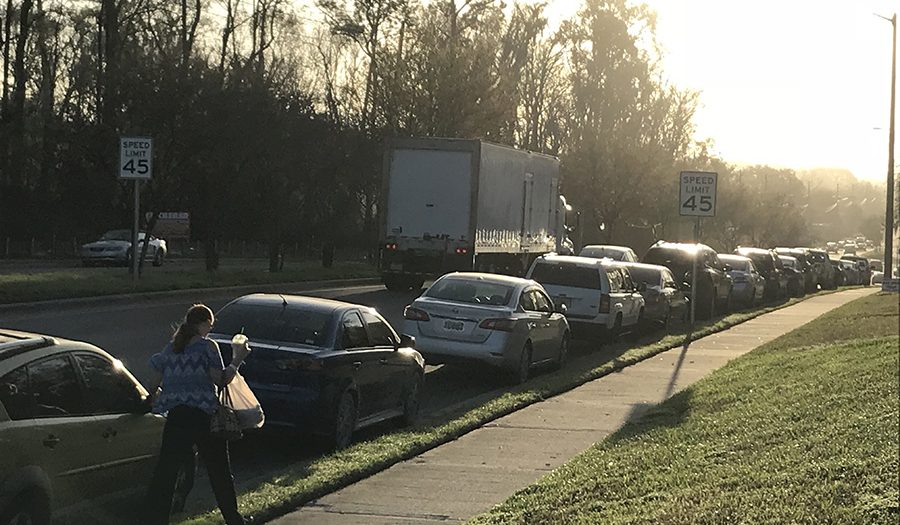 Authorities And Businesses Concerned About Newberry Road On-Street Parking. Can It Be Fixed?

This story is a part of Untold Florida, a WUFT series based on audience questions. Richard, a reader from Gainesville, asked us, “Why are there so many cars parked along SR 26 east of NW 43rd Street during working hours? Are the drivers working locally and, if so, why doesn’t the business supply off-road parking?”

Sherry Larson knows about the hazards of parallel parking. She’s noticed the scuffs in the white paint of her month-old Jeep Patriot inflicted by the heedless traffic that flies past at 45 mph. Nonetheless, she prefers the convenience of her chosen spot in lieu of alternative options.

Larson, who works as a clinic assistant at Southeastern Integrated Medical (SIMED), arrives as early as 7 a.m. every day to secure a spot along the curb of West Newberry Road. The other 60-or-so spaces spanning 38th Street to the light at 43rd Street are quickly crowded with the vehicles of her colleagues, employees of other nearby businesses and the occasional patient.

“It’s close enough to the building that I can comfortably spend my lunch break in my car,” Larson said, “and parking is free at all hours.”

Some frequenters and staff noticed that finding a place to park has become increasingly difficult for both business employees and their clients due to the continuous expansion of commercial properties in the area. Pedestrians moving between cars and crossing the street through crosswalks and traffic alike have compounded congestion at an already busy intersection, said Gainesville city commissioner Harvey Budd.

To alleviate some of the burden for its patients, SIMED paved additional 24 parking spaces in 2016 and developed a decal system for employees to free up capacity in its own lot.

Of the 327 available parking spots, 47 are reserved for providers, practitioners, physicians, and staff who arrive earlier and stay later with permanent parking decals. The remainder of the staff rotates parking every other month in another 57 apportioned spaces, leaving roughly two-thirds open for patient use.

“Holy Faith Catholic Church have been the good stewards of the neighborhood to us at SIMED in allowing our management team to share their parking lot as well,” said Daniel Duncanson, CEO of SIMED. “We make a donation every month in regard to their generosity.”

SIMED employs two part-time drivers with a 15-passenger van to shuttle its staff across the heavily trafficked 0.3 miles from the church to the main building in the morning, afternoon and during lunch hours.

“It’s my turn to park in the lot this month,” Larson said, “but I never do because there’s so many ants around there. They get inside the cars. The church has plenty of space for us, though the shuttle is a bit too slow for me, and it’s a hassle going back and forth.”

Renasant Bank has also allocated five of its own parking spaces for the benefit of SIMED employees.

“Parking along the North and West side of the building is adequate enough for our own employees, and there’s on-street parking available if we need it,” said David Wilson, Gainesville market president at Renasant Bank. “I’m sure we’ll see more issues with parking down the line as we hope to grow our business considerably.”

In a December 2016 meeting, the Metropolitan Transportation Planning Organization (MTPO) recommended that the Florida Department of Transportation replace the on-street parking with designated bike lanes on West Newberry Road.

Their proposal elicited a response from SIMED in June 2017, urging the Gainesville City Commission to preserve the parallel parking lane with concern for the already hindered parking conditions for businesses in the area.

In a June 5th MTPO meeting, commissioners contended that cars parked on the side of the road are not only a problem for bicyclists, but they also worsen gridlock at the intersection late in the afternoon due to employees walking back to their cars.

“Thirty percent of the people that live in East Gainesville get on a bicycle to get to work in the morning, and a lot of those jobs are in that area,” Gainesville Mayor Lauren Poe said at the meeting. “They get up very early in the morning, when it’s still dark, to ride out to those jobs, and if you put them on a road where cars are parked and can open their door without any forewarning, that is a potentially lethal situation. By eliminating this corridor, it is our intention to create a safer condition for all modes of transportation: pedestrians, bicyclists, and cars.”

At the same meeting, commissioner Harvey Budd observed, “at 5 o’clock in the afternoon, the cars that are parked on the road not only become a problem for bicyclists — that’s minor — it’s the people that stop the lights because they want to cross the street to get to their car that results in a backup in the cycling of the street lights.”

“On a Friday around dusk, I turned off 43rd Street heading East and saw it backed up all the way to 34th Street,” Budd added. “I figured out what the problem was while I was watching the cars going through the light at 43rd Street and Newberry Road as every time somebody had to cross the street, they’d press the button, and the light would eventually turn and get it out of its sequence.”

Since the current most feasible solution for relieving the issue of patient parking has been to move as many employees off-site as possible, Duncanson can only acknowledge the problem.

“If the on-street parking goes away, pedestrian traffic will only get worse,” Duncanson said, “as that will require me to have more people parking at the other side of Newberry Road.”

Likewise, other SIMED employees are anxious for the safety of both their patients and passersby.

“There’s been so much growth in the buildings and local businesses that’s put more stress on the availability of parking spaces,” said Kristin Roberts, vice president of support services at SIMED. “If they remove on-street parking to make room for the bike lanes it will exacerbate the burden for both the church and the patients.”

Presently, the bike lane installation plan has been prioritized by the MTPO in its list of projects submitted to the FDOT last summer, but the drafted program released in January 2018 does not include funding for the project as of yet, according to Michael Escalante, senior planner for the North Central Florida Regional Planning Council.

“Hopefully the project will be considered for funding when the road requires resurfacing in another 15 or so years,” Escalante said.