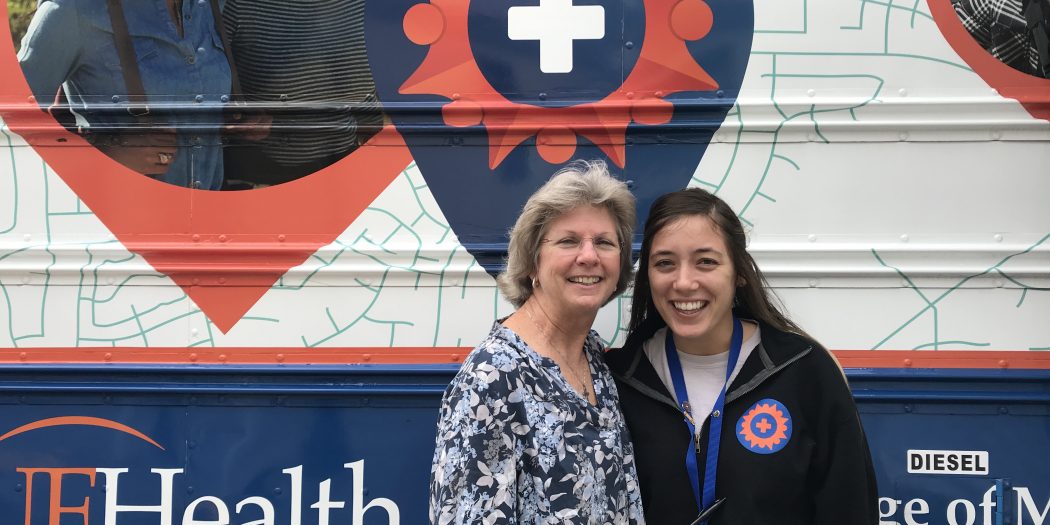 Affectionately known as “Ginny,” Virginia Bruzzese started delivering “nonjudgmental health care” to those who can’t afford it in 1992. Today, she spends her days traveling across Alachua County as a registered nurse with the University of Florida Mobile Outreach Clinic to bring primary care to the people who may need it most — the medically underserved.

“Medically underserved,” is a designation granted to some areas of the country by the federal government. These areas, referred to as health professional shortage areas (HPSAs), have fewer than a generally accepted minimum number of clinicians per thousand people. There are currently about 3,960 designated HPSAs across the U.S. with approximately 46 million residents. Many of them have limited access to primary care services due to financial, cultural, language or other barriers.

In Alachua County, 12.6 percent of people under the age 65 do not have health insurance. In Gainesville, that number jumps to 14.4 percent. These people represent a majority of the medically underserved community that Bruzzese and the clinic are trying to reach. This community also includes those who might not have easy access to health care because there are no facilities near where they live by providing health screenings, primary care exams, family planning, resources, referrals and other specialty services, all free of charge.

“Many of the people, particularly in the east side of Gainesville, utilized Alachua General for their primary care,” Bruzzese said, adding that Alachua General Hospital closed in 2009. “It was determined that it was going to have a pretty big impact on families, so they decided to revive the bus again, the mobile clinic, and use it for people who couldn’t access care otherwise.”

According to Taylor Hopper, a UF Mobile Outreach Clinic volunteer for more than two years, Bruzzese is both a teacher and mentor to clinic volunteers and medical students alike.

“There was this patient who needed eye drops put in three times a day, but he was homeless and didn’t live with anyone, so no one could help him do it,” Hopper said. “So he would come to the bus three times a day and Ginny would go do it for him. Sometimes, if it was late at night, she would even go find him to put his eye drops in.”

Bruzzese said the clinic sees anywhere from 12 to 15 patients every day and strives to focuses on acquiring in-depth knowledge about each and every patient they see.

“We look at their social needs and we look at social determinants of health, so it’s not just your health care that’s involved,” she said. “If you don’t look at all of those influences that will affect your health, you may not adequately serve that patient.”

She said she remembers one patient in particular who benefited from this approach.

According to Bruzzese, one patient had a blood pressure issue and was not improving with the medication she prescribed. By the third visit, when the woman’s blood pressure had still not improved, Bruzzese knew something wasn’t right.

“I said, let’s sit down and look at how you’re taking it, when you’re taking your medicine, and see if there are some other factors going on,” she said. “And she just burst into tears.”

The woman explained to Bruzzese, tears streaming down her face, that she was embarrassed. She told her she had never gotten the medication. That she couldn’t afford it.

“That was really eye-opening,” Bruzzese said. “We made assumptions that she was taking her medication and things were moving along when, in fact, nothing really had changed from her very first visit.”

Bruzzese was able to assist the patient in receiving the medication.

While free or reduced prices for medication cannot be offered to every patient, Bruzzese said the clinic works in collaboration with the UF College of Pharmacy, GRACE Marketplace and Helping Hands for patients to receive medication.

The UF Mobile Outreach Clinic is a member of the Florida Association of Free and Charitable Clinics and operates five days a week, from 11 a.m. – 4 p.m. and sees patients at different daily locations around the county on a first come, first serve basis ( http://outreach.med.ufl.edu/ ).

Mondays, the bus stops at the T.B. McPherson Recreation Center at 1717 SE 15th St., On Tuesdays, it offers services at the Library Partnership Branch at 1130 NE 16th Ave. On Wednesdays, the bus stops at the Downtown Library at 401 E University Ave. On Thursdays, it is located at GRACE Marketplace at 3055 NE 28th Ave and on Fridays, bus services are available only by appointment.

After 41 years as a nurse, Bruzzese has already created an impressive legacy. According to Hopper, it was Bruzzese who inspired her to follow her dreams of helping the medically underserved once she earns her medical degree.

“She definitely is just everything I would want to be as a medical provider,” she said.

Abigail is a reporter for WUFT News who can be reached by calling 352-392-6397 or emailing news@wuft.org.
Previous County-Purchased YMCA Land May Benefit Micanopy Residents With Facilities Similar to Privately Held UF Lake Wauburg Park
Next Afternoon News in 90 Feb. 28, 2018: Gainesville Dementia Patient Found