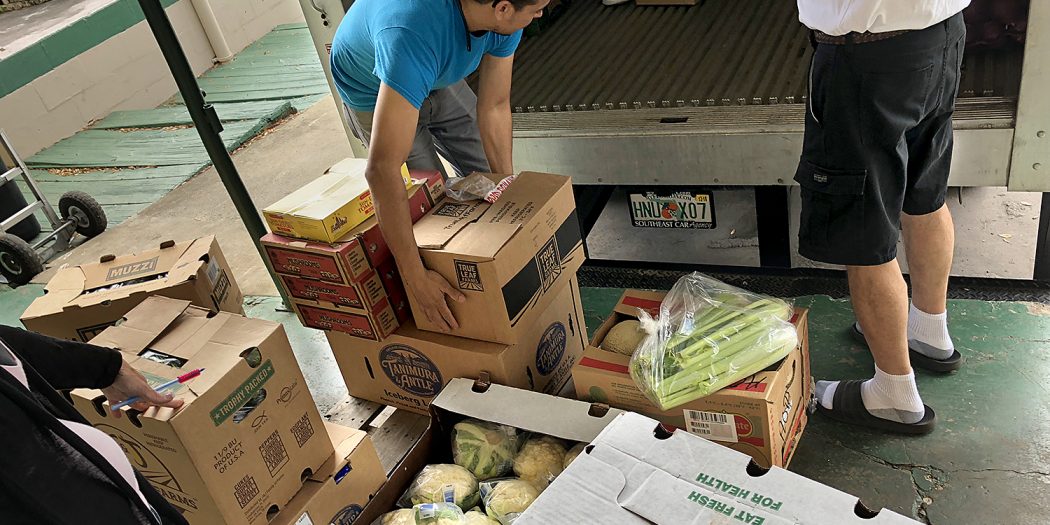 Workers with Rainbow Produce load a truck to deliver produce to their cilents in Gainesville, Florida.

Micro-Local Is The Recipe For Produce Business Success

Several tomatoes, a selection of onions, add some green peppers, plus $950 and a van — that is the recipe Jack Maas and Dean Wiesjahn used to start their dream of a micro-local produce company, Rainbow Produce.

Now, after 30 years of growth, their business supports a cycle of other micro-local businesses with more than 800 produce items from local farms that supply local restaurants.

Maas and Wiesjahn explained that micro-local businesses survive off each other and they hope the community realizes the economic importance of that network, whether that be a farm, produce company or a small-town restaurant.  Rainbow Produce buys from Brown’s Farm located just east of Gainesville on U.S. Highway 301 near Orange Heights.  Roy Brown, co-owner of Brown’s Farm, said he has been selling to them for 20 years and believes that we should think global but buy local. Wiesjahn said they then distribute the produce in a 30-mile radius of Gainesville, which includes Williston, Archer and Alachua.

“That’s been a growing trend that people want local produce, and we try to buy local as often as we can, but at times it’s not here,” Wiesjahn said.  “We sell to restaurants, hospitals and nursing homes, even delivering sometimes about 80 restaurants a day.”

From their one-story tan building in Gainesville, located on the narrow street of 2420 NE 19th Drive, they launched their business in 1989 with five items: tomatoes, onions, lettuce, cucumbers and green peppers.

“He had $450 dollars and I had $450 dollars. We bought $900 dollars worth of produce and turned it into $1,200 and then just kept going back and forth,” Maas said. “It was the most slip-shot operation you have ever seen for the first couple years, but we persevered through it.”

John Zunkel, joined Rainbow Produce in Sept. 1989 and has been working with the owners ever since.

“If the locals support the business that we support then everyone helps each other in a sort of strange way,” Zunkel said. “We really are a small community and there’s not a whole lot of diversity in business. We are the only locally owned and operated one.”

Bill Reichardt, the manager at Ballyhoo Grill located on west University Ave. in Gainesville, said that when buying from Jack and Dean, their families are benefited by locals supporting locals. They will make money for themselves instead of some huge cooperation.

“We all want to make the community better, we all want the community to grow and we want to share the wealth, so to speak,” Reichardt said. “So many things now are corporate owned and everything goes to big, huge corporations and I really like the local people, things and restaurants.”

The chain of locals supporting locals has advantages because of the proximity to deliver the produce back and forth.

“Main advantage of being local is we can always take it back to them if they need it,” Wiesjahn said.

A big problem that local produce businesses face is the weather, especially hurricanes.

“When a hurricane hits and if they wipe out the fields of where tomatoes are being grown, prices go up,” Wiesjahn said. “Produce is kind of unique because it’s based on supply and demand and on the weather.”

Co-worker Zunkel said that local entrepreneurship is never easy, but Rainbow Produce has been able to grow a solid business. “Everyone wants to be a capitalist in America and own their own business, and this has been a thriving one for a while.”

Najla is a reporter for WUFT News who can be reached by calling 352-392-6397 or emailing news@wuft.org.
Previous Morning News in 90: Feb. 28, 2018
Next ‘Fightin’ Bubba’: Alachua City Commissioner Shares Story of Overcoming Sexual Abuse and Cancer