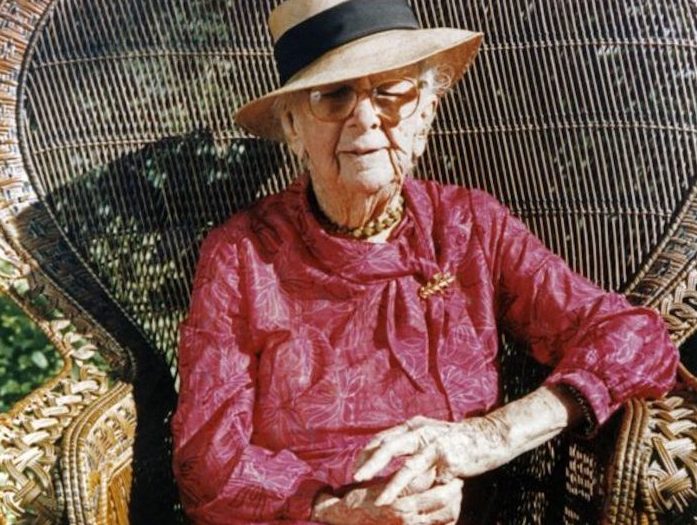 Marjory Stoneman Douglas: The Grande Dame Of The Everglades

Marjory Stoneman Douglas was the only one on the train when she arrived in Florida in 1915 wearing a heavy blue serge dress because “when you left New York in those days on the train you wore blue serge.”

Her dress began to stick to her when she reached Jacksonville, Florida, and she remembered seeing nothing but palm trees all the way to Miami. When she stepped off the train, the beauty of Florida struck her. She described Florida’s sunlight as “that marvelous light.”

Douglas was an American journalist, author, women’s suffrage advocate and environmentalist known for her unfaltering defense of the Everglades against efforts to drain it and regain land for development.

She lived to be 108 years old, and one of her legacies resides in Parkland, Florida, known as Marjory Stoneman Douglas High School, which opened in 1990.

Former University of Florida English professor Kevin McCarthy personally edited some of Douglas’ books. He said Douglas spent years crusading for the causes she felt so strongly about. She was a reporter for The Miami Herald and became entrenched within the Miami community.

Her most influential book “The Everglades: River of Grass” aided in changing the perception of the Everglades from a mere swamp to a treasured natural resource.

“She somehow got [The Everglades: River of Grass] into the hands of politicians in Washington,” said McCarthy. “I heard that Marjory Stoneman Douglas was able to get (then-congressman Richard) Nixon’s daughter to read the book, and then the daughter showed it to her father.”

She wrote nearly 50 short stories from 1924 to 1943 with the majority focusing on the Florida scene that she knew so well, McCarthy said.

“It made people very much aware of the different type of South Florida, the natural part of Florida,” said McCarthy. “When she established Friends of the Everglades (a conservationist and activist organization in the United States), she had a lot of credibility because of her writing including the writing she did in her short stories.”

Standing at 5-feet-5 inches, Douglas was the only woman working during her time at The Miami Herald, but that didn’t stop her from doing all kinds of things.

“She almost single-handedly ended a terribly abusive system of leasing convicts to work camps,” said McCarthy. “She was the editor of a press at the University of Miami, for example, and she wrote short stories and books late in her 80s and 90s, and she began this organization that had 4,000 members to save the Everglades.”

UF history professor Jack Emerson Davis said Douglas was always a supporter of women’s rights. She was one of the first 100 women in the U.S. to enlist in the armed forces. She enlisted later with the American Red Cross where she spent 13 months in Europe post-World War I.

“She was a suffragist when she was at Wellesley College,” said, Davis. “When she moved to Florida, she was part of the suffragist campaign, but she also supported the first Equal Rights Amendment which was introduced in 1923.”

Known for being extremely well-spoken, Douglas’ attributed her public speaking skills to the elocution courses she took at Wellesley College in Massachusetts, graduating in 1912 with a Bachelor of Arts in English.

“When she spoke, she was well-informed. She would readily berate legislators or policymakers for what she believed were the wrong things,” said Davis. “She never let up on stating her opinion whether in writing or speeches or in meeting with policymakers.”

Her father, Frank Stoneman, founded the newspaper that later became The Miami Herald and became the managing editor for the newspaper, McCarthy said. Soon after her arrival, Stoneman put Douglas to work as a writer for the newspaper. At her 1978 speech in Pensacola, Douglas remarked, “I don’t think there’s any experience like working on a small newspaper to start you off wanting to write.”

Douglas lived long enough to be a centenarian at 108 years old, working until nearly the end of her life for the restoration of the Everglades. She did not have any siblings or children.

“She was fearless, it didn’t matter who she was talking to, with engineers, or governors or even presidents. She believed so strongly in preserving the environment that she was very effective,” said McCarthy. “She became known as the little lady who loved to give speeches because she felt so strongly about things dealing with South Florida.”

Douglas’ writing, activism and advocacy have set her national significance as the singularly most vital person connected with the conservation and restoration of the Everglades. She was first and foremost a writer, but her legacies live on from her lifelong fight for social justice. She died at her home in Coconut Grove, Florida in 1998 where her longtime residence remains a historic site.

If Douglas’ was alive today, her advice to those students advocating for gun control today: “Persist, keep carrying on and do exactly what you are doing.”

Amy is a reporter for WUFT News who can be reached by calling 352-392-6397 or emailing news@wuft.org.
Previous Alachua County Withdraws Plan To Build Fire Station On Millhopper Road
Next Melrose Woman Pioneers Alzheimer’s Treatment With Music, Dance Therapy