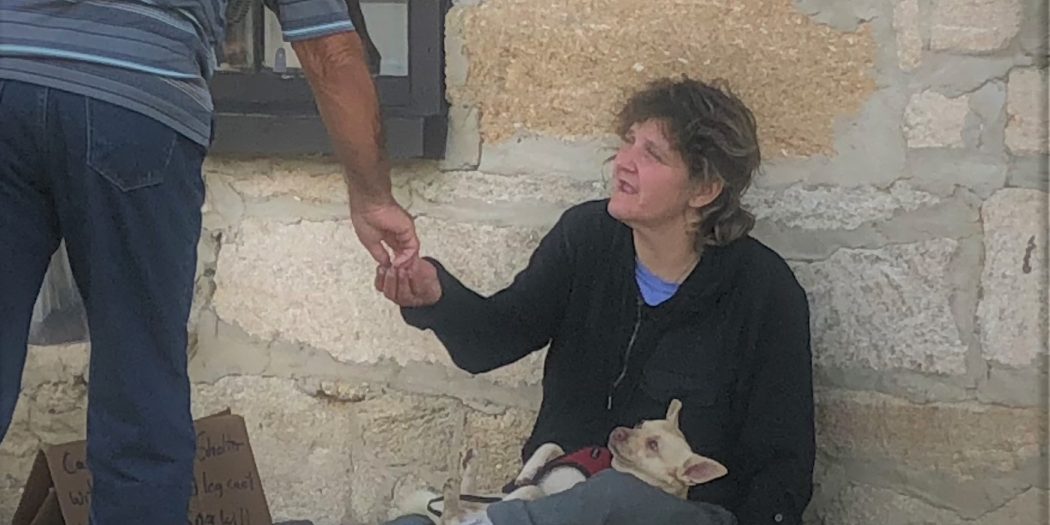 Eileen Zink receives a dollar from a passerby. Her sign reads she cannot get into a shelter because of her dog Bubba. (Cherlene Hewitt/ WUFT News)

On a warm and sunny Tuesday afternoon in February, the streets of St. George Street in St. Augustine bustle with shoppers. Two men sit quietly near the intersection of Hypolita and St. George streets, holding signs with words pleading for help.

In the background, a steady din of traffic and chatter is punctuated by the bells of tour trolleys. Store employees stand outside, offering samples of food, soap and other gifts. Signs fill store windows. Clothes hang on the white, Spanish walls of The Acosta Building, which houses The Shopaholic Boutique. Its sign advertises “All clothing $20 and under.”

Near the intersection of Cuna Street, a raspy-voiced woman with broken glasses sits next to a man. The couple’s sign reads, “It could happen to you.” Another man with a large rose tattoo on his cheek paces around them.

The half dozen panhandlers go largely unnoticed by the crowd of tourists, shoppers and families who are strolling the half-mile stretch of shops along St. George Street from Orange Street to Cathedral Place. But even as the panhandlers are quiet, and their presence is legally considered protected speech, there are concerns about how a growing and visible homeless population could impact visitors.

As a tourist destination, historic St. Augustine relies on the money visitors bring in. Data from the city’s Tourism & Development Council, posted in its website, touts the $6,000 per capita the comes to the city from its tourists. The money funds such projects as beach re-nourishment and maintenance of beach accesses walkovers.

The council’s website not only displays information but social media feedback. That includes concerns about tourists who are threatening not to come back in the wake of what some view as heightened panhandling in the area.

To address those concerns, the council is planning an education campaign, asking tourists not to give money, but to donate to specific charities instead.

Some merchants are critical of what they see as a problem. A sign in the window of St. George Tavern is blunt: “Keep your money! Don’t support Vagrants & Panhandlers. Many are using Drugs & Alcohol and Vandalizing our Beautiful City.”

The signs were distributed by a citizen watch group, the “St. Augustine Vagrant Watch Group,” which has a Facebook page where locals post pictures of arrest records of panhandlers and the various panhandling activities around town.

This is not a problem that is easily solved. And as the week continues, on another hot Friday afternoon, Eileen Zink sits in the shade under a sign for The Salcedo House. She is cradling her chihuahua-mix, Bubba, like a baby. Her sign reads, “Can’t get into shelter with my dog. Bad leg. God, anything helps please.” She adds on the other side of her sign: “Need tent and shade.”

Zink is cordial. She asks one person for the time but otherwise sits in silence, petting Bubba. Zink says she never asks anyone for money, nor does she expect it.

“They don’t have to give me anything,” she says. “It’s their choice.”

A little girl no more than 10 years old puts some change on top of Zink’s backpack. “I’m sorry for your injury,” she said to Zink, who offers to let her pet Bubba.

Residents try to consider the issue thoughtfully. Jaime Harris, who has lived in St. Augustine for 42 years, says that he doesn’t believe panhandling is any worse in St. Augustine than it is anywhere else. He doesn’t mind panhandlers who legitimately need help, but he is not a fan of the ones who don’t need help but ask for money anyway.

“There’s a real yin and yang to it,” he explains.

Signs hang on the wall of the Explorers Outpost which read, “Welcome School Groups!” A Dipping Dots A-frame sign sits in the doorway.

Directly across from it, in the shade, a man with no legs sits in a wheelchair. His sign reads, “Homeless & God Bless.” His neat, auburn hair is in a ponytail. He’s clean-shaven.

Some tourists smile and wave, and he waves back, but otherwise, he sits silently in his wheelchair.

His name is Billy James, 35, but he doesn’t feel comfortable sharing his last name. He says that he never asks anybody for anything.

“When someone wants to give me something, that’s a blessing.”

Since panhandling is a form of protected speech, the city has to tread carefully when determining how to deter it.

Billy said he heard on the news that the city was considering a 20-foot ban on panhandling around ATMs or business entrances, but he said he doesn’t believe that will affect him because he is respected in the community.

Charlene is a reporter for WUFT News who can be reached by calling 352-392-6397 or emailing news@wuft.org.
Previous Florida Senate Bill Banning Texting While Driving Looks To Be Stalled For 2018
Next County-Purchased YMCA Land May Benefit Micanopy Residents With Facilities Similar to Privately Held UF Lake Wauburg Park