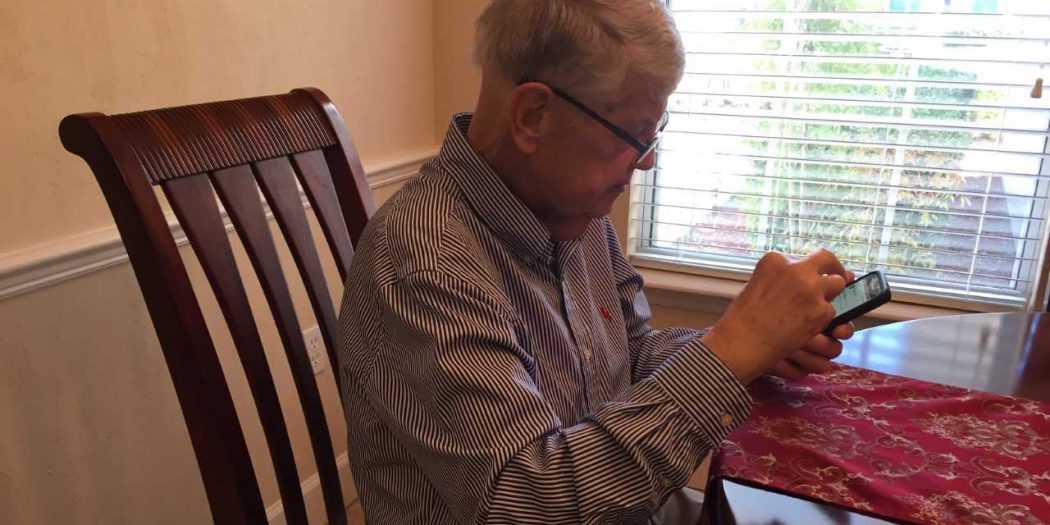 Alachua city commissioner Robert Wilford is trying to walk at least two-and-a-half miles without a cane every day.

Treating a tumor on his parotid gland burned away a part of his cheek – a second-degree burn so severe that Wilford had to wear this mask to stabilize his head.

Wilford has made his fight against the disease public, posting almost daily updates to his Facebook page about his recovery. The posts are wide-ranging, but they highlight a public official’s desire to highlight his various battles — against cancer, his own failings, and his family in a way that captivates his audience of friends.

He once wrote of himself as King Sisyphus of Greek mythology. Because of his deceitfulness, this king of Ephyra was punished by the gods to roll an immense boulder up a hill, only to have it come back down and hit him.

Wilford’s third term as city commissioner, which began in 2017, got off to a rough start after a citizen reported a campaign finance violation. According to a Gainesville Sun report, Wilford’s campaign was fined for accepting excessive cash contributions.

“It’s stupidity on my part,” Wilford said. He explained the donations were $167 compared to the maximum amount of $50.

Wilford said he accepted the responsibility and corrected his mistake.

He said he then lost more than 70 pounds to cancer but still continues rolling his boulder, just as he has since he was a child.

Wilford doesn’t lose his energy, instead channeling it into his Facebook posts and a campaign against cancer. It’s a campaign to truly understand all that the boulder really is.

Fightin' Bubba's 2017… A Year of Miracles!After I share the many setbacks yours truly has encountered this past…

Getting them to confess their sins

Born on March 1, 1945, in Jacksonville to what he describes as a family filled with alcoholism and domestic violence, Wilford then moved to Birmingham, Alabama.

Some of his first childhood memories aren’t happy ones, even those associated with religion.

Wilford didn’t go to church for peace and escape. It’s where his sexual assaults took place.

“I was sexually abused by a priest, Father Charles V. Cross, for four years. John Paul II said that (the allegations from victims sexually abused by priests) was a farce. They could still know and take actions, but they allowed him. They moved him from parish to parish,” Wilford said. After six other victims abused by the same priest had contacted Wilford, he summarized their conversations in his book and included them in his letters to the diocese.

The 2015 book, “Wear a Collar, Rape a Child,” chronicled Wilford’s commitment and actions to expose clergy sexual abuse. A decade of persistent attempts to communicate with church representatives, news outlets and S.N.A.P. (Survivors Network of those Abused by Priests) finally paid off.

In May 2002, The Birmingham News reported Cross, then the director of general services for the Catholic Diocese of Birmingham, would be suspended from Catholic services publicly a month later.

Many other international accusations have spurred the end of tolerance, although Wilford said he had to watch Cross attend both his mother’s and brother-in-law’s funerals. Wilford said, in the book, that last tolerance was also the beginning of his career of standing up for others and, surprisingly, the church.

Janis Youngblood has worked with Wilford on the parish council of St. Madeline Church in High Springs.

“A part of me has a trouble understanding how someone could stand up so much for the church when so many things have happened to him in this institution…But you can’t condemn everybody,” Youngblood said.

Youngblood admitted that she still dreads having to talk about this topic.

“Nobody should be abusing anyone…You have to go by the books to go to the head persons (of the church), and I think sometimes all those areas in between prevent justice from being accomplished,” Youngblood said.

Wilford moved back to Florida after his 20-year service in the U.S. Navy. He said he still struggled with clinical depression, despite the help of his wife Diane and therapies. Nevertheless, he found his way to a struggling non-profit agency in Gainesville.

“Basically we wanted him to be our boss, the head of the agency. From the first time we met, we felt an immediate connection,” said Peggy Hunsucker, a retired Director of Business Operations for the Central Florida Community Action Agency or CFCAA. This organization assists families with helping to pay utilities, housing, and employment.

Working with Wilford for nine years, Hunsucker said Wilford realized up front that the agency is smaller than he had expected, he would be the first one she saw in the mornings and the last one to leave at nights.

Even when the business was in crisis — the statewide Florida Association for Community Action was ready to cut funding in 2006 — Hunsucker said Wilford’s partnership and leadership skills were valuable. It wasn’t long before the agency got the statewide group’s attention. CFCAA became the first to win three awards in a year from this statewide association.

But Hunsucker said Wilford’s real success was to listen to all inputs and let the agency own its victory. She remembers vividly how Wilford took care of his co-workers and especially during her breast cancer treatment.

Finding love within an ugly battle

Toward the end of 2017, Wilford missed two city commission meetings after being diagnosed with stage four of a rare gland cancer.

“It just scared the hell out of you…I pray. I never lost faith. I might lose faith in the Catholic Church and the guys in charge, but as far as the doctrine and practices…I still have a passion to pay it forward.”

When these struggles take him backward in life, Wilford stays strong with this slogan of “Pay It Forward.”

From that day when the young Catholic boy couldn’t open the car door and run away from his sexual predator, a moment Wilford captured in his book, he remains interested in engaging others in his life and open every door he could, including social media.

“The pain was excruciating. I decided to post a few things on Facebook and have a good attitude. I decided to be creative: ‘Fighting Bubba’ (my nickname when I was growing up) [versus] my opponent, who is ‘Ugly Boy Cancer,’” Wilford said.

"Fightin' Bubba" is getting there in his battle against "Ugly Boy Cancer!" No worries… My spirits are still strong,…

Wilford said he’s amazed that courage once again receives an outpouring of love and support from more than 4,000 Facebook friends.

At the age of 73, this cancer patient is still staying positive with one overriding wish: “I’d love to see my oldest granddaughter graduate from high school,” said Wilford. He knows his eight-year-old granddaughter Natalie is aware of his condition, as she also lost a classmate and two other grandmothers.

Wilford said he still owes his success, health, and happiness to his Catholic faith. He said the treatment has removed most of the cancer cells. He’s prepared for its metastatic nature — for the boulder to roll back at him at any time — and regardless of what happens, Fightin’ Bubba will keep sharing his fight.

Quan is a reporter at WUFT News who can be reached by emailing news@wuft.org or calling 352-392-6397.
Previous Micro-Local Is The Recipe For Produce Business Success
Next Florida Senate Bill Banning Texting While Driving Looks To Be Stalled For 2018