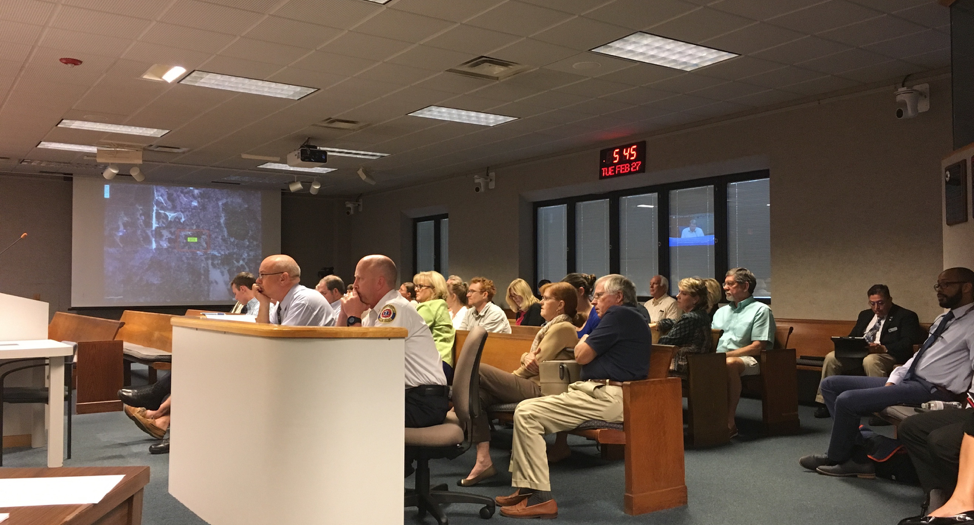 More than 30 people attended the county commission meeting regarding the fire station land permit application at the county administration building. The commission ended the meeting by choosing to withdraw the application. (Ellen Andreu / WUFT News)

A sigh of relief came from the audience of more than 30 Tuesday night after the Alachua County Commission voted unanimously to temporarily withdraw its request for a special use permit to build a fire station on Millhopper Road that had raised concerns among local residents.

Instead, the commissioners agreed to consider alternatives to the proposed station and work with the city to solve issues over the ending of the fire service assistance agreement between the county and Gainesville. Alachua County voted in May 2017 to end its agreement with Gainesville for firefighter services because of the cost and instead build additional stations and add engines to the areas in need.

The county had applied for a special use permit to build the station on land at 7516 Millhopper Road, which is currently zoned residential. The station would have first consisted of a temporary fire station with vehicle carports until a permanent building could take its place.

“This particular parcel is one of about seven that we looked at,” he said. “We’ve had several fire services master plans. One in 2004, another in 2012, and both of those recommended service on the Millhopper Road area.”

The proposed property still has water utilities and is on a straight piece of Millhopper Road with good visibility left and right, said Northcutt, who noted the fire station would enhance response times and serve about 1,200 to 1,500 property owners.

Nancy Russell, who lives next door to the site, said her family has owned land on Millhopper Road for over 100 years and that the proposed station would be built on property owned by her cousin’s widow.

Russell said the house burned down in the middle of the night about two years ago. Since then, the remnants of the house have continued to crumble, and the property is vacant. The land has been for sale for the past year.

Russell said she prefers the fire station not be built on the property. Her main concerns are noise from the fire station and the potential of decreasing property values with the addition of a temporary, mobile structure.

“It’s just not prudent or financially sound to build a fire station anywhere on Millhopper Road,” said Rice, who wonders how the county will pay for the fire station and if it involves a tax increase.

“I believe … that if they put a fire station down at basically where 43rd St and US 441 converge, within a half mile of there, there’s at least five properties for sale that they can put a fire station,” Rice said. “And they can cover all the areas they need to cover, without spending that kind of money to put a fire station here on Millhopper Road.”

Rice attended the county commission meeting along with more than 30 local residents.

After the proposed motion at the meeting, several citizens thanked the county commissioners for their thoughtfulness in handling the application process.

Ellen is a reporter for WUFT News who can be reached by calling 352-392-6397 or emailing news@wuft.org.
Previous Feb. 27, 2018: Evening News In 90
Next Marjory Stoneman Douglas: The Grande Dame Of The Everglades