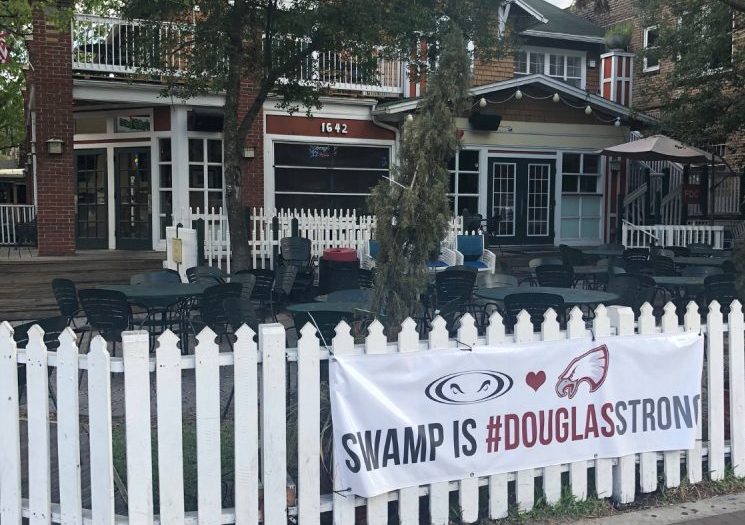 Outside of the Swamp Restaurant on University Avenue, there is a large white banner that is tacked onto the white picket fence. The nearly 6-foot banner reads “SWAMP IS #DOUGLASSTRONG” in the Marjory Stoneman Douglas’ school colors, burgundy, and silver.

Two weeks after the shooting in Parkland, Florida, Gainesville businesses have been holding fundraisers to raise money for victims and their families.

The staff at Swamp Restaurant came together and decided to donate all the gratuity and tips they earned on Monday and Tuesday to the Marjory Stoneman Douglas Fund, which was started by the Broward Education Foundation.

Ryan Prodesky, the manager of Swamp, said he gives all the credit to his staff for the idea to help.

“We were talking about what we could to do help,” Prodesky said. “(It was) something that we felt was a tragedy that certainly affected families in South Florida, but also families with students here in Gainesville.”

He said they encouraged customers to leave even more than a normal gratuity since all of the money will be going to the cause.

“Douglas needs all the support they can get,” she said. “I’ve never been to (Swamp) before, so now that I know that they are donating to this cause I want to check it out now.”

Hurricane BTW, which opened earlier this month on University Avenue, held a fundraiser with a similar goal. The restaurant donated all of their proceeds, in addition to employee tips, from 6 to 9 p.m. on Monday.

Franchise owner Jack Gandolfo said a few of his employees, as well as their friends in their sororities and fraternities, are Douglas alumni. He said his employees reached out to him about the idea, and he suggested donating 100 percent of the proceeds.

“We are here to help in anyway we can,” Gandolof said. “We are a new business in town and we want to make an impact and say, ‘we’re here, we want to participate, we want to be part of the community.’”

According to Gandolofo, the Gainesville location raised $3,250 overall during the three hour fundraiser, $290 of which came from employee tips. Gandolofo says they are also donating the proceeds they made during the same time at their West Palm Beach location.

Lauren is a reporter for WUFT News who can be reached by calling 352-392-6397 or emailing news@wuft.org.
Previous IHOP Restaurants Host Fundraiser For UF Health Shands Children’s Hospital
Next Ocala-based Business Teams Up With Habitat For Humanity To Build Homes For 10 Families In Key West