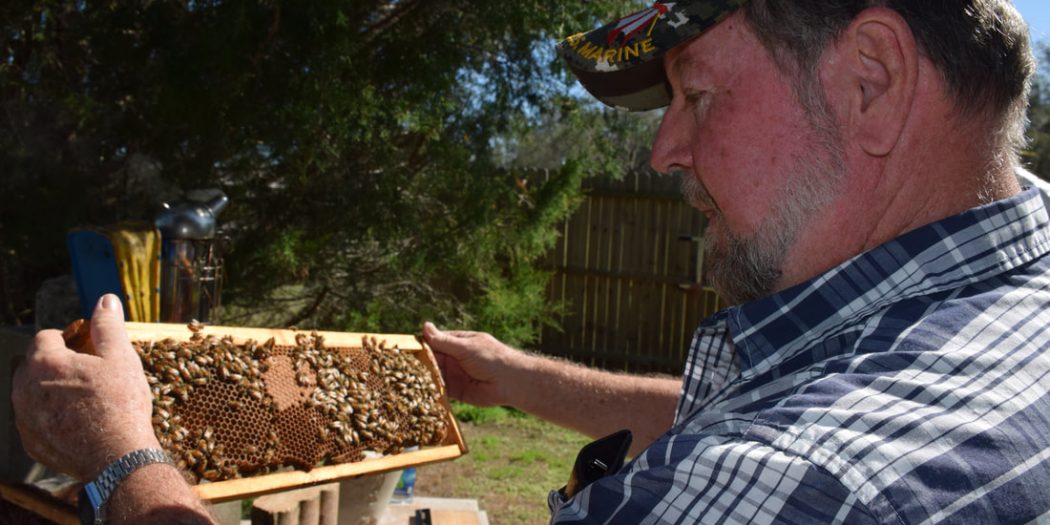 To make sure his hive is healthy, beekeeper Chappie McChesney inspects each frame. Beetles and mites can prey on bees, he said, as do human thieves who steal them. (Brooke Henderson/WUFT News)

Florida Considers Increasing Penalty For Bee Colony Theft, But Will It Help?

Tony Hogg doesn’t know who stole beehives from his Jefferson County farm. Not the first time in 2014, when they got away with 30 hives, or the second in 2016, when 35 went missing.

“You get two guys who know what they’re doing, they can be pretty doggone quick and be out of there,” said Hogg, of Monticello, president of the Florida State Beekeepers Association.

He’s not the only Florida beekeeper experiencing theft. Over 1,200 hives were stolen statewide in 2016 alone, according to The Associated Press. In Southwest Florida, beekeepers had more than $150,000 worth of hives stolen that year. One beekeeper from Cape Coral estimates that an average beehive is worth $300, but said that doesn’t include other associated costs.

State Sen. Denise Grimsley, R-Sebring, is sponsoring a bill that would double the penalties – from $5,000 to $10,000 per hive – for stealing hives from someone else’s bee colony. In Hogg’s case, someone convicted of the felony would potentially owe $650,000 to the state.

The Senate Rules Committee was set to consider the bill on Monday afternoon, but the ongoing debate over gun violence and school safety consumed the entire committee hearing; a new hearing has not yet been scheduled, and the session ends March 9. The House votes on its version on Wednesday.

Hogg said the legislation could help, but only if the thieves are caught.

“It don’t make no difference what the fine is if we can’t catch them,” he said.

Grimsley’s bill also calls for similarly doubling the fines for stealing commercially farmed animals. Cattle, pigs and horses are also frequent targets, and the thefts helped cause beef prices to rise. Cows that used to sell for $600 are now worth $1,000 to $1,200.

“There’s been a lot of theft lately, and for a lot of people, this is all they have,” said Anne Bell, Grimsley’s legislative aide. “This is their livelihood.”

Honeybees are essential for citrus and blueberry agriculture in southwest Florida, Grimsley said. She said she hopes through the legislation to “send a message that these thefts disrupt bee colonies critical to many farming operations and livestock that we need to protect.”

Beekeepers often hide the location of their apiaries – a collection of hives – because of theft. Some invest in GPS trackers and video surveillance for extra security. Believing that other beekeepers do most of the stealing, the Councells are afraid to trust even their own employees.

“They are in a position to hurt you if it’s an inside job,” Melissa Councell said. “Now, we have cameras everywhere.”

The Councells blame greed in commercial agriculture for all the stealing. Farmers contract with beekeepers to rent bees necessary to pollinate crops. The more hives delivered, the more money made. Thieves particularly steal queen bees to grow more hives. But with the queen gone, the victim’s hives collapse, leaving thousands of bees dead and contracts unfulfilled.

The couple said it can take up to four years to recover from stolen hives.

“If you don’t have bees, you can’t even afford the equipment,” Keith Councell said.

Compounding the beekeepers’ problem: Police appear powerless to stop it.

“The local police will take the report and say, ‘Well, that’s all we can do. Have a good day and good luck,’” Keith Councell said.

Sgt. Anita Iriarte said the Lee County Sheriff’s Office does not have the equipment to recover or store stolen hives. If deputies catch the thieves, the victims would be called to retrieve the property, Iriarte said.

The Councells said they believe that Grimsley’s bill could help prevent further theft.

Wayne “Chappie” McChesney, 72, a retired Marine who lives in Alachua and founded the North Central Florida Beekeepers Association, disagrees. He called the bill a Band-Aid and said it won’t make a difference.

He doesn’t even bother to call police when his hives are stolen. Since 2000, the Alachua County Sheriff’s Office has not made one arrest on larceny charges for stealing bee colonies.

“It’s like putting a lock on a gate – a thief will cut that lock and keep coming back,” said McChesney, whose forearms are a tapestry of bee stings and scars from his military service.

He said a honeybee’s value extends beyond a paycheck.

“If someone came into your yard and stole your pet dog or cat, you’d miss them. You’d start putting up posters,” McChesney said. “Well, we can’t do that with honeybees.”

Brooke is a reporter for WUFT News who can be reached by calling 352-392-6397 or emailing news@wuft.org.
Previous Feb. 27, 2018: Morning News In 90
Next IHOP Restaurants Host Fundraiser For UF Health Shands Children’s Hospital