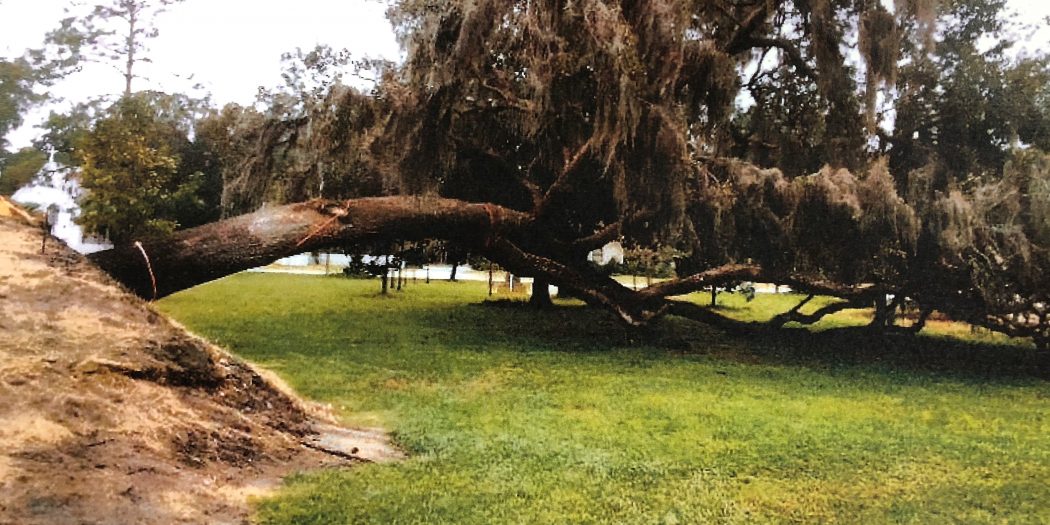 The live oak tree in Melrose Heritage Park, affectionately called “Big Irma,” before it was removed after it had fallen. (Courtesy of Putnam County Public Records)

After Hurricane Irma tore its way through the state of Florida, a lot of things looked a little different. Many people focused on restoring order, but in Melrose, one particular change was heartily embraced: a huge fallen live oak tree.

The tree, which residents endearingly named “Big Irma,” was located in Melrose Heritage Park. Big Irma’s base was uprooted during the hurricane, but the it did not completely fall. The top of the tree lay approximately eight to 10 feet above the ground.

Several residents of Melrose made an attempt to stabilize the tree. President of the Melrose Business and Community Association Joe Rush donated money and time to haul in dirt to lay around the base. Rush said they put down topsoil and grass seed, and the fire department watered it.

“A lot of people adored this tree and put in a lot of effort to save it,” said Keith Bollum, the president of Historic Melrose, Inc.

To Bollum, the tree represented an “artsy monument.” The county saw it more as a liability.

Prior to the meeting, Barbara Shepherd, a member of risk management staff for Putnam County, told Whisnant in an email that falling limbs were a concern and that leaving it alone was an invitation to children to play on it.

“In that case, we should chop them all down,” Rush said. “A kid can fall out of any tree.”

Shepherd included in her email to Whisnant responses from a liability representative and a loss control consultant for Putnam County. Both recommended removal of the tree.

“Many times, your defense is that you do not have notice that a dangerous condition exists,” Shepherd wrote to Whisnant. “But in this case, we are on notice of the potential.”

“They seemed to sneak in in the dead of night,” Bollum said. “They showed up and zip, zip, zip, zoom, zoom, zoom. They chopped it down.”

Bollum said he was simply monitoring the event in sadness, but other Melrose residents were not so quiet.

A number of people appeared at the park and began cursing at the contractors. Bollum said one woman climbed a root ball of the tree. Eventually she came down and the tree was taken away.

Bollum said he is not too sure where those who chopped the tree down came from or who sent them, and neither is Rush. All they know is some people showed up in a truck one day, and then “Big Irma” was gone.

Whisnant said, “No one from the county chopped down the tree.”

Terry Suggs, an administrator for the Putnam County Board of Commissioners, confirmed the county hired North Central Florida Tree Service & Resources, Inc. to remove the cherished oak due to public safety concerns.

Rush said he is disappointed by what happened with “Big Irma.”

Bollum said Historic Melrose, Inc. initially raised funds to purchase the piece of land, now Melrose Heritage Park, when it was under threat of development about 10 years ago, but soon turned the park over to Putnam County to maintain and operate.

He said issues with being ignored or pushed aside by Putnam County surface regularly in Melrose.

The small town of Melrose lies on Lake Santa Fe and the Santa Fe River about 19 miles east of Gainesville and is considered a part of four counties: Alachua, Bradford, Clay and Putnam.

Bollum said some residents of Melrose want to create an independent city government and become incorporated rather than try to deal with four separate counties.

He said some feel that incorporation is the key to getting the town’s political needs and opinions out there. However, he did mention that not everyone feels this way. Many prefer the way things are.

“I kind of like being ignored by all four counties,” he laughed.

Taylor is a reporter for WUFT News who can be reached by calling 352-392-6397 or emailing news@wuft.org.
Previous Florida Executes Eric Scott Branch for 1994 Murder
Next Gainesville To Send 100 People To “Rally To Tally” For Gun Reform