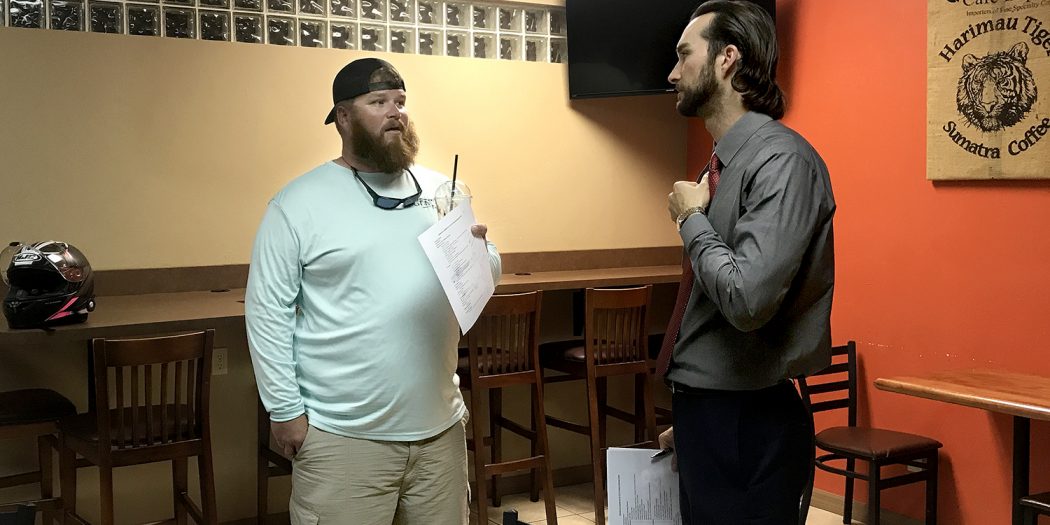 The two-hour and six-minute drive from Adel, Georgia to to Steinhatchee on Interstate 75 is worth the road time for Jessica Ogletree. After searching for a charter fishing trip for her son, Ogletree was introduced to 10 CAN Inc. with a free fishing trip — a chance to leave her daily responsibilities on land as she ventured into Florida waters.

“This isn’t something that you hear about very often,” Ogleetree said, an Adel police officer and military veteran. “People do a lot for military and first responders, but something like this that is just absolutely specifically for them, to be able to say ‘thank you’ and guarantee a great day.”

10 CAN Inc began in October 2013 and aims to help veterans and first responders identify activities, such as fishing, hunting or agriculture, to help them cope with post traumatic stress disorder (PTSD), said Matthew Burke, an Air Force veteran and founder of 10 CAN Inc.  He said 10 CAN Inc. partners with multiple companies, throughout Florida, to provide about 100 fishing, hunting and agriculture missions a year on both day and weekend trips.  In 2017, the organization helped about 2,500 participants and their families.

“It’s a good break. Getting out of your normal rotation,” said John Davis, a police officer in White Springs, Florida. “It’s a nice experience, especially when you have a captain that’s been in law enforcement and knows what’s going on.”

Kyle Skipper, captain of Marker One Flats Charters introduced Davis to 10 CAN Inc.  Skipper said the fishing trips are free and they offer about four a month.

In 2002, Burke was with the United States Air Force serving in Afghanistan. While running through bunkers looking for one of his missing men, Burke clipped the top of his head and compressed his c-spine. After his injury, Burke began to have anxiety attacks and mobility issues that were later diagnosed as PTSD.  He found that outdoor activities helped with his rehabilitation process, which led to his idea for 10 CAN.

Burke said, 10 CAN is a well-rounded organization that can connect with members regardless of their interests and backgrounds. He explained that unlike other rehabilitation facilities, 10 CAN offers three concentrations: mind, body and spirit. Your spirit has to be at the core healing your mind and your body else what you are doing is pointless, Burke said.

“I was told a long time ago that we need to find a specialty and perfect it, but that’s not what I feel we are called to do,” Burke said. “I feel that, as people helping people goes, you got to go where they’re at and not everybody hunts and not everybody farms,”

Burke said participants go through a vetting process for 10 CAN to fit them with the programs that work best for them. “Eighty percent we can help and 20 percent we can’t,” he said.

The group hosted its fourth-annual father-daughter dance in February, plus sponsors other events like survival races for people in the community.

One of the goals of the organization is to bridge the gap between church and veterans because churches are not equipped to deal with veterans, Burke said. 10 CAN acts as a liaison between the warrior and the church.

“Encouraging spiritual growth through the great outdoors and ministry that evangelizes through action; I believe that is the most effective way to reach warriors,” Burke said.  He added that participants do not have to be a Christian or associated with a church to be apart of the organization.

Skipper said, people have the negative idea that 10 CAN only seeks to help people who are broken, but that isn’t true. The organization works to help everyone.

“We just want to give back, to thank people who have given so much,” Skipper said.

Zindzi is a reporter for WUFT News who can be reached by calling 352-392-6397 or emailing news@wuft.org.
Previous After Stoneman Shooting, Florida Governor Calls for Raising Minimum Age to Buy Firearms
Next Feb. 23, 2018: Morning News In 90