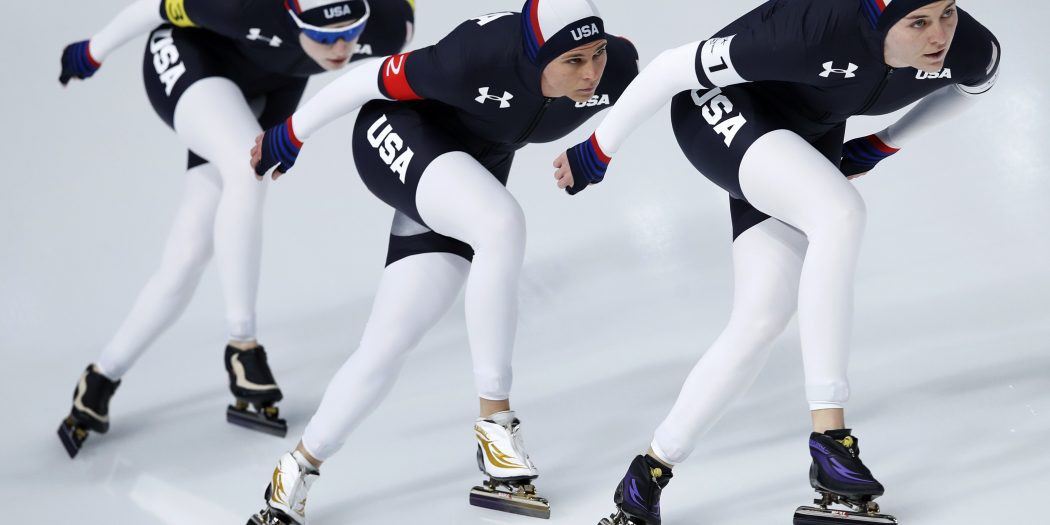 Mia Manganello crossed the finish line, glanced at the videoboard and let out a yell.

She then grabbed hands with American teammates Heather Bergsma and Brittany Bowe, and the trio thrust their arms in the air.

The Americans had reason to celebrate Wednesday. They finally won a long-track speedskating medal at the Pyeongchang Olympics, ending a U.S. drought for the women dating to the 2002 Salt Lake City Games.

“It was just an uproar of emotions of screamin’ and cheerin’,” a smiling Manganello said.

The trio earned bronze in the women’s team pursuit, beating Canada by 0.45 seconds with a time of 2 minutes, 59.27 seconds. They surged to the lead before slowing near the end as the fast early pace took its toll.

“I could barely see straight as we crossed the line so it took a second to register,” Bergsma said. “It was like all the weight lifted off my shoulders.”

Japan and the Netherlands took first and second place, respectively.

Bergsma and Bowe hadn’t skated team pursuit together since the Sochi Games four years ago. During the season, the two biggest stars on the U.S. women’s team focus on their individual events.

That left Manganello, Carlijn Schoutens and Petra Acker (who didn’t make the Olympic team) skating together to qualify the U.S. for a spot at the Pyeongchang Games.

The Americans went up against the powerful Netherlands in the semifinals and got trounced by 6.87 seconds. The U.S. rested Bowe, gambling they would secure a spot in the bronze-medal final.

Their strategy against Canada was to use Bergsma’s and Bowe’s speed to grab the early lead and “try to hang on for dear life,” Bowe said.

Skating in front for nearly three laps at the end, a tiring Manganello yelled for help.

“Heather and I were pushing as hard as we could,” Bowe said.

It got dicey in the last turn.

Manganello and Bowe grew wobbly and both slipped.

“I don’t think any of us could feel our legs,” Bowe said. “Just grateful we all stayed on our feet to get to that finish line.”

Bowe and Bergsma, so dominant on the World Cup circuit and at world championships, had yet to win an Olympic medal. Bowe is at her second games; Bergsma her third.

Both had come up short in their individual races at the Gangneung Oval.

A year ago, Bowe wasn’t sure she would make the Olympics. She was experiencing post-concussion syndrome after colliding with a teammate at practice. The recovery cost her precious training time and left her in a “really dark place.”

“It’s kind of a perfect ending for the Olympics for myself personally,” she said, “taking a team to get me to the podium.”

The Associated Press is a wire service to which WUFT News subscribes.
Previous Feb. 21, 2018: Morning News In 90
Next State, Federal Grants Could Help Two Alachua County Neighborhoods That Flooded During Irma