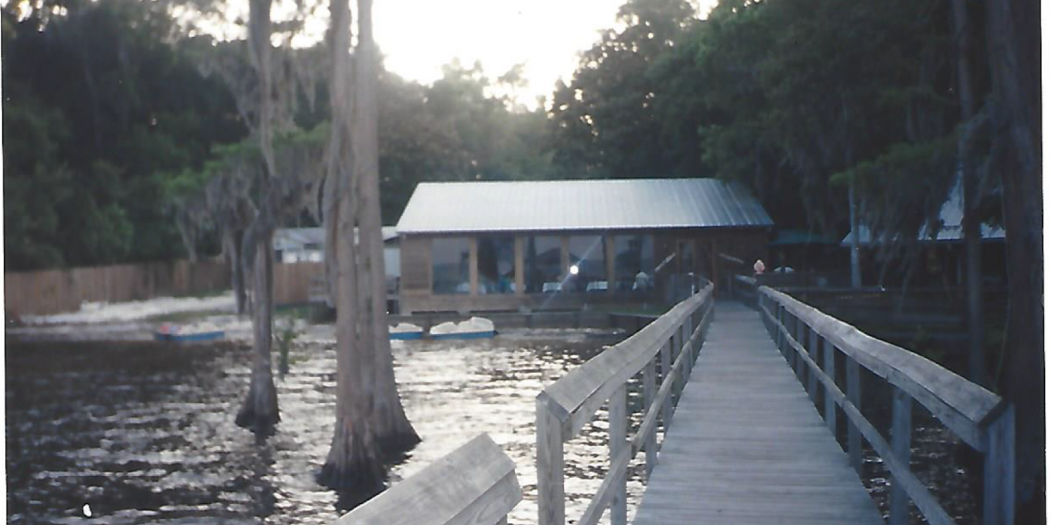 The Boat House at Santa Fe Harbour uses the orange building as a venue for parties. The dock, which led to a gazebo, was destroyed during Hurricane Irma. (Photo courtesy Julia Vandershoot)

‘Labor of Love:’ How One Earleton Couple Is Saving A Historical Landmark

John and Julia Vanderschoot first went to Buddy’s Landing on a date.

At Buddy’s, the only restaurant on Lake Santa Fe for decades, dress was casual and rules were more like suggestions. In bathing suits, visitors of the fish camp, like John and Julia, gathered to meet other lake dwellers, relax and enjoy the lake.

After the Vanderschoots married in 1988, they visited Buddy’s twice a month to spend time on the lake and drink. John owned a Mako boat, and they windsurfed when the weather was right.

“Those were good times,” Julia said. “We had good memories here.”

Buddy’s was a destination in the 1950’s through 1980’s for University of Florida students looking for a fun day trip and “snowbird” travelers who visited from the Northeast United States to fish and swim. For Earleton residents, it was an extension of their kitchen table — the only place to go out and eat in the town. Diners could eat cheaply with a view of the lake and a place to store their boat.

The Vanderschoots thought about buying the place even before they moved to the lake in 1994 to raise their son and daughter. At one point, John put a bid on the property but was outbid by one other person. That other buyer eventually sold Buddy’s to John a few years later.

When Julia told a close friend they had bought the land, the friend was ecstatic, Julia said.

“She said ‘you’re going to bring life back to the lake again,’” Julia said. “I think that’s what everyone thinks. Buddy’s Landing was the life of the lake. It was where the lake residents came together. That’s where we congregated, that’s where we ate dinner and caught up with people we hadn’t seen in a while.”

After John and Julia Vanderschoot bought the property two and a half years ago, they got to work.

They changed the name from Buddy’s Landing to The Boathouse at Santa Fe Harbor and met a previous owner, Eldred Bivens, who still lived down the street. He drove them around the dilapidated cabins and overgrown landscaping and pointed out its history. Bivens didn’t own the land for long but has seen owners come and go. He said the Vanderschoots have good plans for what to do with Buddy’s.

“It’s too nice an area not to be utilized,” the 79-year-old said as he looked out at the lake from his porch.

The couple works on the property almost every day. They have finished renovating and remodeling three of six cabins on the 4-acre property. Each one can accomodate four and has a kitchen and porch. They get most of their traffic from AirBnb, but Julia hopes visitors find their website, which is still called buddyslanding.com.

“It’s all the old original character,” she said of the cabins, which smell of cedar when you walk in. “Some people may not like them, but they certainly speak to John and I.”

Visiting family members have stayed in the cabins, which each have a view of the lake.

“When you get up in the morning, sit on the front porch and look out at the sunrise, it’s just beautiful out here,” Julia said.

The family also uses an indoor party venue that overlooks the water for celebrations including Christmas, a baby shower and when their son, Brandon, left for the Army. The space is available for rent, but Julia said they are the only ones that have used it. Alachua County building permit records indicate the venue was the most recent building on the property, completed in 1998.

Near the venue space, there’s a marina with covered and uncovered storage areas for boats, although the only boat there is John’s Conchy Joe.

The last building on the property is the shell of a restaurant that once was Buddy’s Landing. Julia laughs when she looks at it.

“It’s just so ugly,” she said. “If I could just put a big tent over the top and pretend it wasn’t there.”

The last work done on the restaurant was done in 1997, and the county has since rated the building historical. Julia said they plan on building a pavilion with a fireplace and bathrooms for the footprint of the restaurant.

Earleton resident Eldon Chambers misses the Big Bleu salad he’d order at the restaurant. When it closed in the early 2000’s, residents of the town lost the only place to eat out. Now, if Chambers and others want to go out to dinner, they drive to Waldo.

“It’d be nice to have somewhere to go,” he said.

Julia said other residents have told her they wish she would open a place to eat, but she and her husband have no experience in the restaurant industry. The septic would also have to be changed to adhere to new county building codes. Julia said the project would be expensive.

“There are so many other projects that need to be finished,” she said.

Instead, they hope to partner with a food truck or chef and offer some food options in the future. Julia said a barbeque with a lake view would be extremely successful.

Although the restaurant will go, the couple has tried to incorporate as much of the existing historical structures as possible. Julia said the buildings “have good bones.” More than anything, they don’t want anything to change about the place they used to visit on dates.

“It would be easier to come in here with a bulldozer, tear everything down and start all over again, but we wanted to preserve what we could,” she said. “It’s a labor of love.”

Other than the passing of time, the greatest change to Buddy’s Landing occurred during Hurricane Irma.

The property lost both docks and its sea wall. Julia said the construction delayed the schedule to open more of The Boathouse at Santa Fe Harbor.

When Irma blew through Lake Santa Fe and destroyed every dock on the west side of the lake, their schedule to finish construction was shot, Julia said.

“I had my few days of tears, and then I put my big girl britches back on,” she said. “Everyone had damage out here, and we had our share.”

Workers have almost rebuilt the seawall and will fix one of the two docks that were damaged. The other dock, which had a gazebo at the end of it, is completely gone. Julia doesn’t know where the tin roof of the gazebo went during the storm.

When the seawall was destroyed, some of the coast was eroded. Julia doesn’t think that will ever be repaired. Other residents said their lakeside land is disappearing from rising waters.

The marina has a covered area for boat storage that the Vanderschoots haven’t rented out because there’s too much silt in it. John put his boat, Conchy Joe, underneath it during the hurricane and the top of it broke off when the waters rose.

Lake dwellers flocked to the property after the storm to ask for use of their boat ramp. People who had boats on the lake couldn’t use the public ramps in Waldo or Melrose because they were closed by the county. The boat ramp at Buddy’s was the only one used after Irma.

Before the Vanderschoots owned The Boathouse at Santa Fe Harbor, there’s been several iterations of Buddy’s Landing. The last owners called it “Buddy’z” with a z.

Teddy Pruett said that when her family owned Buddy’s for three years between 1958 and 1961, it was the best time of her life.

Pruett and her older brother Duane did everything from pumping gas for boaters, cleaning the cabins after renters left and selling food and beverages at the snack stand. She said her father was an alcoholic, so the day-to-day responsibilities of managing Buddy’s fell to her and Duane.

“We ran the place,” she said. “We worked hard, but we played hard.”

When she had time, she would go out on the lake to fish and swim. All she needed was a sandwich, her transistor radio, and Sheba, a Boxer mix, she said.

As Runaway Sue by Dion played in the background, Pruett made lifelong friends, she said. At night, she and her brother would take gas from the pump, pour it on the lake and light it on fire. Then, they would take turns diving through the fire.

“It was a different time back then,” she said.

A package of Ritz crackers and a coke cost 25 cents, and boaters could pay 50 cents to launch their boat from there. The Pruetts had the only television in the area.

Buddy’s is where she met her first crush, Bobby Shanks, whose parents managed the post office and owned the general store. She said she didn’t have a chance, compared to the other beautiful girls who hung out at Buddy’s in their bathing suits.

“I was just a freckled, flat-chested kid-sister,” she said.

Four years ago, Pruett — now married — returned to Earleton for the first time in 30 years. Although Shanks still lived at the end of the street, his parents’ general store was gone. As she drove to the entrance of Buddy’s she saw overgrown weeds, warning signs and an unwelcoming gate.

Pruett, a Lake City resident, is glad the new owners are restoring the place and hopes one day to rent a cabin from them. She said she once thought about buying it but it was too expensive.

“I think they hit the nail on the head,” she said. “I think it’s going to be very successful.”

*Editor’s note: This story has been updated to correct Brandon Vanderschoot’s name. An earlier version reported his name as Kyle.

Meryl is a reporter for WUFT News who can be reached by calling 352-392-6397 or emailing news@wuft.org.
Previous Weil Hall Addition Marks Another LEED-Certified Building On University of Florida Campus
Next Keystone Heights’ Lakes Might Get State Funding For Water Replenishment, But Not Everyone’s Happy