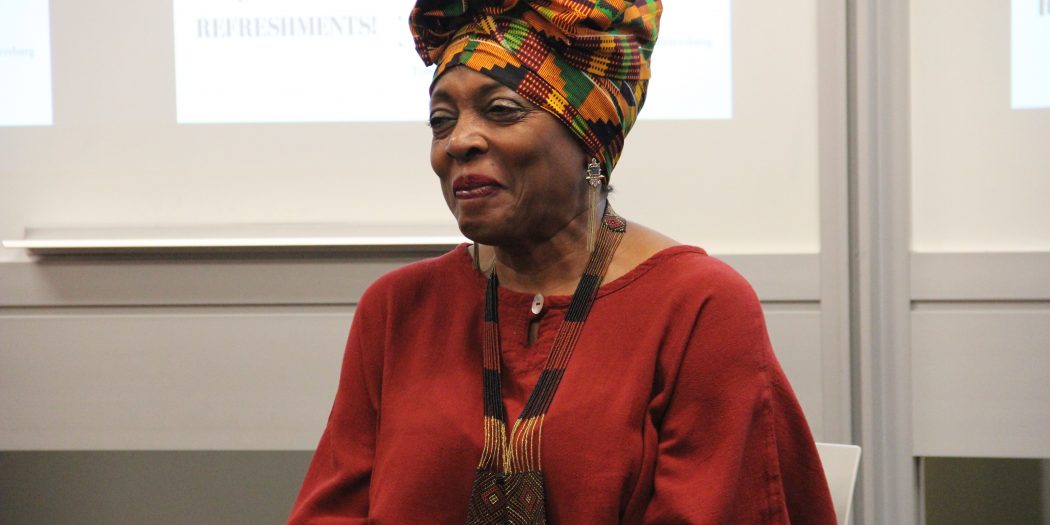 Jeraldine Willaims, of Tampa, smiles as she is applauded Monday, February 19, 2018 after her inspiring talk in the AHA! Lab at the University of Florida's College of Journalism and Communications. (Jasmine Dahlby/WUFT News)

As one of the 14 African-American students to integrate UF in 1963, Jeraldine Williams has unique experiences few others share, followed by a long line of firsts.

We sat down with Williams to talk about her time and experiences at UF.

What was your experience like as one of the first African-American students to attend and graduate from UF?

It was awe-inspiring to be able to come, it was a responsibility to stay, and it was exciting to graduate. I wanted to put an exclamation point behind my graduation, and so what I did was I entered the Hearst Contest and I was the first African American to win on a national level. That has been a huge, huge memory for me to just tap into every now and then.

How did you feel being such an extreme minority, one of 14 black students, in a school of 25,000 students that were all mainly white?

Well, there was a need to go to classes, and many of my classes were over at the stadium, so I spent a lot of time walking back and forth. Over at the stadium (Ben Hill Griffin Stadium, where the college was then located), my presence was more distinct because I was the only [black student] period, while university-wide at least there were 13 others. From time to time it was halting. We had to figure out which direction to go, which way to answer, how to navigate. Those waters were really rough out there, but there was no physical harm that was caused and I was very pleased about that. I mean that could have been a game stopper there. All I had to do was put my blinders on and get through, and I got through.

You are clearly a very strong and confident person, did you feel uncomfortable at times?

Yeah, I mean I was 17 at the time. I was in a setting that I had never been in in my life. It was a huge, huge situation where there were no black professionals, no black adults, no one for me to look up to connect with. So, I felt the isolation, I felt uncomfortable, I felt that I had to overcome, and I did. But you know, there were people who were so kind to me in the community.

Did it get easier as time went by?

It didn’t get any easier, but the point was not for me to look for it to be easier. My goal was to enter, to prove that I could stay, to remain and to graduate. For me to have graduated with that Hearst exclamation point, I really felt like I was on top of the world.

You’ve been very successful; would you say being a trailblazer at UF gave you the strength and confidence to be successful in your career?

Did you ever consider attending a historically black college? Why did you choose UF?

I wanted to go to a historical black college, but I chose to come to UF because somebody needed to walk into that open door that my schoolmates had opened by sitting in and by having demonstrations and mass protests. You know, these doors were going to be opening and somebody had to walk in, otherwise what would it have been all about? So, I felt like I had a responsibility in that regard, but also [UF] had an accredited school of journalism. My mother said that was a requirement for me to go wherever, and there was not an accredited school of journalism at any historically black university at that time.

What advice would you give to people in minority situations to be successful?

Connect with self, connect with self. Have a strong identity. If it’s weak then that’s what you portray, that’s what is manifested. You see a strength in me and you tend to have an appreciation for that and to respect that. If I come across as backpedaling and weak you pick that up too.

Jasmine is a reporter for WUFT News who can be reached by calling 352-392-6397 or emailing news@wuft.org.
Previous Alachua County Council Parent Teacher Association Holds Vigil After Shooting
Next Weil Hall Addition Marks Another LEED-Certified Building On University of Florida Campus

The plan, which must be sent to the state by Friday, includes three choices for how students would like to continue their education in the fall, offering one online and two in-person options.