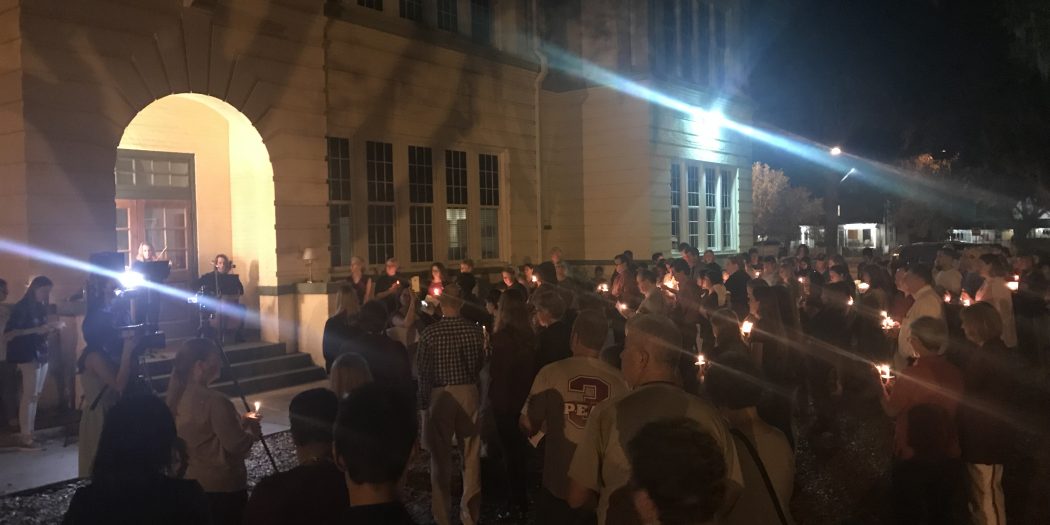 With the candles lit and the surrounding area quiet, the community took a moment of silence to remember those lost in the Feb. 14, 2018, shooting. (Caelan Barnhart/WUFT News)

About 100 people came together Monday night for the Alachua County Council Parent Teacher Association’s candlelight vigil to remember those lost during the Feb. 14 shooting.

They called it the #NoMore Candlelight Vigil, and people began to trickle in around 6:30 p.m. as the sun gave off its last rays for the day before setting. By 7 p.m., a crowd congregated on the west side lawn of the Alachua County Public Schools Offices located at 620 E. University Ave.

President of ACCPTA Khanh-Lien Banko said the Florida PTA coordinated these vigils as a statewide event. She said this was one of about 20 vigils that took place throughout at least 15 different counties.

Banko acknowledged all 17 victims and spoke a little about each. Graduates of Douglas High School were in attendance to support their alma mater, Alachua County Advocates PTA President Megan Hendricks said.

Candles were lit and music played before a moment of silence and a prayer ensued.

Once the tears were wiped away and throats were cleared, the momentum of the vigil changed from mourning to action. The question soon became: What to do next?

The #NoMore hashtag idea came from students who said they won’t be remembered for being in the shooting, according to Banko, but rather for making sure that something like this doesn’t happen again.

Abi Krecic, a Buchholz High School sophomore, said #NoMore is a remembrance and a call to act.

The 15-year-old said she was shell-shocked when she heard the news of the shooting and is now scared when someone opens the classroom door even if it’s simply somebody coming back from the drinking fountain.

Alachua County School Board member Gunnar Paulson said something needs to be done, and now is the time to do it.

“Each child has the right to go to school and feel safe,” Paulson said.

Banko said if anyone was unable to attend the vigil, further discussion will take place on Feb. 22 at the upcoming ACCPTA general meeting. During the meeting, people will be allowed to express their opinions, ask questions and learn about school safety and mentoring programs.

Caelan is a reporter for WUFT News who can be reached by calling 352-392-6397 or emailing news@wuft.org.
Previous What Effect Will Heartwood Development Have on East Gainesville Property Taxes?
Next Celebrating Black History Month With Trailblazer Jeraldine Williams