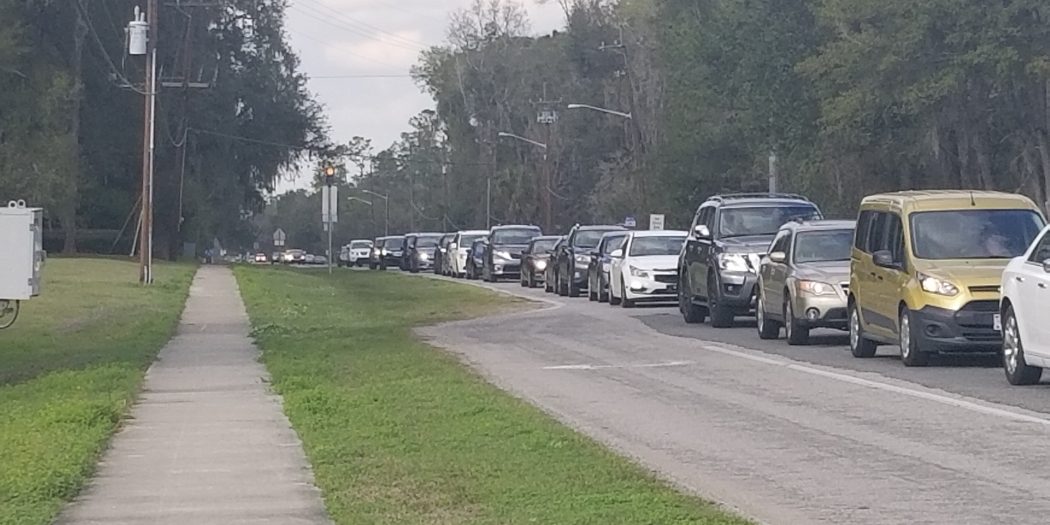 Wedemeyer said that there are parts of Tower Road, especially near schools, that could benefit from more lanes. He said it’s not rare to find backed up traffic on Tower Road, like in the picture above. (Matthew Arrojas/WUFT News)

This story is a part of Untold Florida, a WUFT News series built from your questions. Ed Svastits, an audience member, asked us, “What is the status of improvements to Tower Road? Where are the traffic circles the County Commission approved? Where are the turn lanes?”

The long-awaited fix for potholes and cracks on Tower Road is on deck for this spring, with filling and resurfacing scheduled now that county commissioners agreed on a reduced scope of work to renovate the heavily trafficked road.

County Engineer Ramon Gavarrete said a Tower Road project has been in the books for Alachua County since the 1980s.

“It’s a project that is long overdue, the contract has been awarded, and we are hoping to see work going on sometime in March,” Gavarrete said.

Six turning lanes will be added in the future, including one for the Tower Road Library, he said.

Additionally, a $950,000 grant from the U.S. Department of Transportation will be used to construct a multi-use pathway from Southwest 26th Place to Southwest 8th Ave on the west side of the roadway, according to Singleton.

In total, the county put aside $4,420,000 to be used on Tower Road renovations, including the DOT grant.

However, much to the disappointment of Gainesville resident Jon Wedemeyer, Alachua County currently has no plans to add more lanes to the roadway other than turning lanes.

As someone who has lived in Gainesville most of his life and uses the roadway frequently as an Uber driver, Wedemeyer said that while he is happy to see the road improved slightly, he doesn’t think the county is doing enough.

“To me, if you are going to be working on the road anyway, why not go ahead and go all the way and add lanes now?,” he said. “You’re already in there resurfacing, it makes no sense not to widen the whole thing now and be done with it.”

Gavarrete said that he understands why people would want to see more done to Tower Road, but that the county is working within tight financial constraints.

“You know, we all have wish lists,” Gavarrete said. “In a perfect world, I’m sure people would have loved for that roadway to be widened to do more, but what we are doing with this project is what we needed to do.”

The road will remain open during the day. To minimize the impact of construction for surrounding businesses and residents, Gavarrete said that road work will be limited to between the hours of 6:30 p.m. and 6:30 a.m.

“You try to inconvenience the traveling public as little as you can, and at the same time, it’s also better for construction operations when you get to work under less traffic,” he said.

Another Uber driver Peter Rojas said he also uses Tower Road daily and he is glad the road will be kept open during the day since it would feel nearly impossible to drive around town efficiently.

Gavarrete said that Tower Road renovations are expected to start sometime in March or April and it should not take longer than eight months to complete the project.