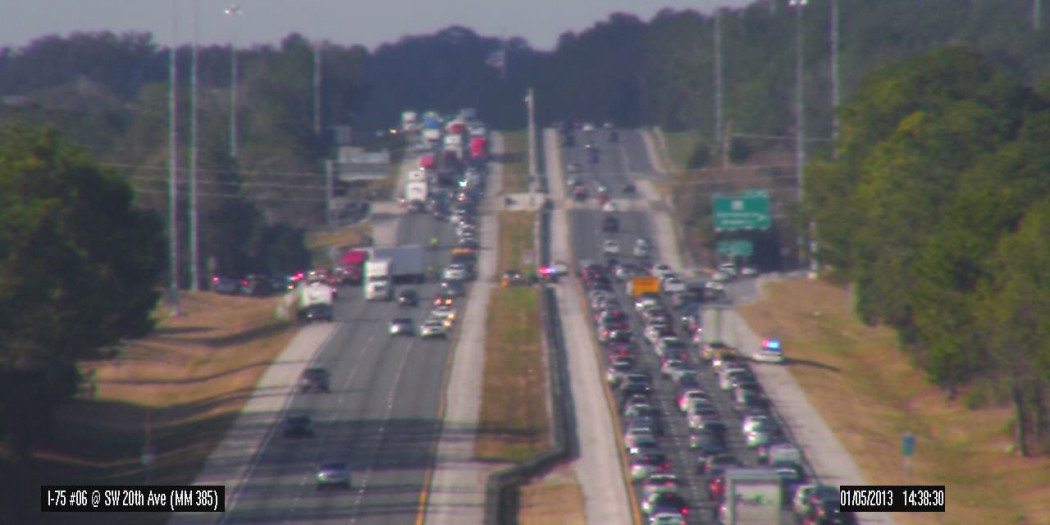 This image from the traffic camera at 2:39 p.m. Saturday shows the backup along I-75 near Newberry Road in Gainesville.

A postcard stated her home, located right between Newberry and Jonesville, is in a study area for a potential new traffic corridor.

Owens was one of the thousands of residents whose home may fall victim to a new road – one that may pave over her property or increase developments in her hometown.

Affected residents are expressing concerns about their homes, farms and the future of their beloved rural community.

“It is like having the rug pulled out from under you,” Owens said. “Just a big swath of pavement and traffic going through our woods and bisecting Newberry and the west side of the county. It is truly paving paradise.”

The Road to Expansion

In 2016, the Metropolitan Transportation Planning Organization developed a long-term plan to ease congestion on I-75 instead of building a new toll road in the region.

Then, Hurricane Irma ravaged the state forcing thousands to evacuate via the highways, reviving the idea for road expansion.

The Florida Department of Transportation’s I-75 Relief Study is looking to expand the interstate.

Dick Kane, communications director, said the FDOT is evaluating the potential for new and enhanced corridors between the Tampa Bay region and I-75 in North Central Florida. By the end of this study, Kane said enough information will be collected to decide whether a new route is needed.

The Florida Turnpike Enterprise, now called the “Coastal Connector,” is looking at new transportation alternatives in Citrus and Marion Counties, said Kelda Senior, spokeswoman for the Florida Turnpike. The study is evaluating the potential for new corridors in those two counties.

Alachua County Transportation Planning Manager Jeff Hays said the county is reviewing the FDOT’s plans and making sure local interest is taken into consideration. According to Hays, the county previously suggested the FDOT look toward making improvements in the existing right of way for I-75.

Hays said both plans, if in effect, could impact residents.

If a new corridor is proposed, it could affect the environment and population growth.

If the decision is to improve I-75 corridors, Hays said it may lead to additional traffic on express lanes and truck lanes.

It may also separate interstate traffic with local traffic to improve safety and reduce congestion, he said.

Senior said the Coastal Connector study is aiming to help “relieve congestion, improve internal connectivity, and accommodate planned and future growth within the study area, and to improve regional connectivity to I-75 and the surrounding area.”

Life in the “Cone of Uncertainty”

The road projects are still under review.

Senior said the Florida Turnpike Enterprise (FTE) is beginning to identify corridor alternatives and will present its plans at a public meeting sometime this spring.

For now, residents are living in limbo not knowing what will happen to their home.

“We have the threat of this road, which is like a category five hurricane breathing down our neck,” Owens said. “We don’t know if it is going to come, and we don’t know which of our neighbors it’s going to effect.”

Hays said Alachua County wouldn’t see any effects of construction for many years.

Depending on how the studies unfold, he said it may be at least five years until any building starts.

“I don’t think there are any immediate impacts,” he said. “It takes funding and time to mobilize main right of way.”

Despite the local opposition, Senior said the road projects may be beneficial.

“Consider the future needs in the area,” she said. “This study may help to improve regional connectivity, accommodating population growth and supporting tourism-related traffic.”

Hays said it is important for people for and against the road studies to make their opinions known throughout the process on the FDOT and Coastal Connector websites.

Some local residents fear the new roads will populate their quiet, rural homeland.

Randy Johnson, a Newberry resident, said the business boom from the roads will change his mobile home life.

“Moving out here, it is much more peaceful and stress-free,” he said. “I am really concerned that the life that I chose, and my mother chose, is going to be taken away.”

“We want to keep this beautiful, rural, significant environment so people can come visit,” said Owens. “That is what we came for.”

Johnson said the FDOT should look to other solutions for population growth like high-speed rail systems for faster travel or more secure shelters for emergency evacuations.

“Consider the fact that a lot of the people that are here – they are in this area because they chose to be here,” he said. “Because it is their home.”

Owens, like many Newberry neighbors, is concerned about her land and her home.

Meredith is a reporter who can be contacted by calling 352-392-6397 or emailing news@wuft.org.
Previous Florida Voices | Ellie Gaustria, Living at Life’s Deadly Intersection
Next Feb. 19, 2018: Morning News In 90

Starke Businesses Survived The Route 301 Bypass. Will They Survive The Pandemic, Too?

“Things were looking pretty good. Then this mess hit.”