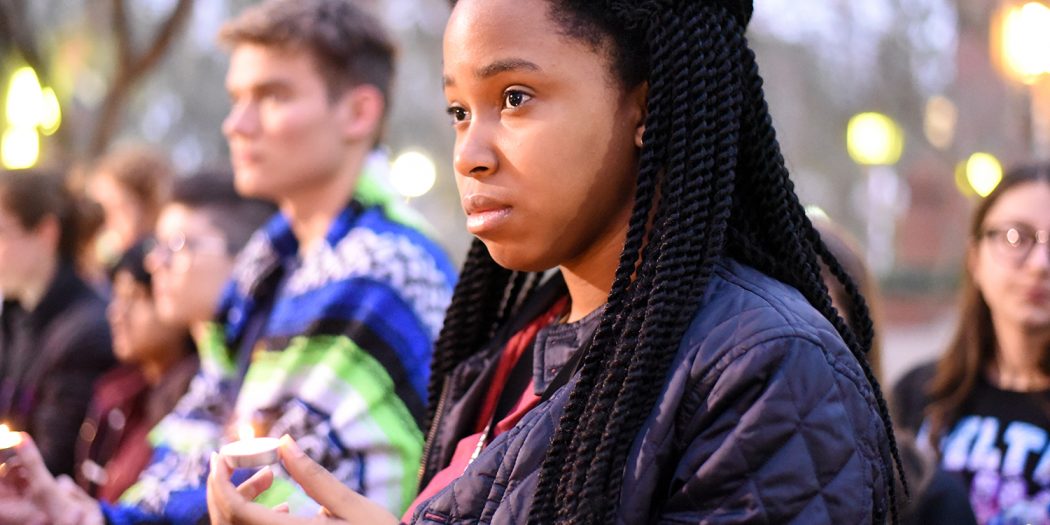 By Dakota Williams and Abigail Miller

Turlington Plaza stood dark and empty Friday morning. The RTS bus engines growled as they drove by on Newell Road. The chirping of birds echoed across the campus. As the sun slowly ascended behind the clouds, the plaza soon glowed from the candles of the mourning.

Students gathered in Turlington Plaza for a vigil to remember the 17 lives lost in the Parkland, Fla. school shooting, which took place on Wednesday at Marjory Stoneman Douglas High School.

Guerrier first heard about the shooting from Conway.

“She called me the day that it happened, just crying,” Guerrier said.

Guerrier said they decided to host their own since they would not be able to go home for any of the vigils in Parkland.

“The next day we created a flier and a Facebook event together and everything just started to happen, and now, here we are,” she said.

Gabrielle Noud, a senior marketing student at UF, reached out to Guerrier over Facebook to offer help. Noud graduated from Marjory Stoneman Douglas nearly four years ago. She was having a hard time believing it was real. She said it is a picturesque town with no crime.

Noud and her friend Jackie Orr, a fourth-year biology major at UF, who also graduated from Marjory Stoneman Douglas, arrived at the vigil early with a large basket full of candles to hand out to those in attendance.

“Our hearts go out to the victims’ families,” said Orr.

By 6:45, a sea of burgundy and black — the school’s colors — filled the plaza. A large semi-circle formed around a line of 17 people, each of whom volunteered to say the name, age and a statement about one of the victims.

“Alyssa Alhadeff was 14 years old. She was a soccer player,” the first volunteer said.

A moment of silence followed after every victim was granted recognition.

Members of the crowd joined Elizabeth Neilson, a first-year international studies and economics major at UF, and Destiny Woods, a fourth-year telecommunication major at UF in singing “Amazing Grace” shortly after the names were said.

Woods later took to the center of the crowd and sang “Rise Up” another inspirational melody, written by Andra Day.

Before the vigil came to a close, Conway made a short speech.

“Don’t let this define Parkland,” she said. “Parkland is so much, so much more than this.”

Fennzia then asked everyone to form a circle, grab hold of the person next to them and swayed in unison as they sang “Lean on Me.” Around the circle, there were heads resting on shoulders, puffy eyes that looked as though they were out of tears and backs being rubbed in an effort to provide comfort.

Guerrier said the one thing she has noticed in her 20 years of life is that love is a choice.

“So, the same way that person chose to do evil, we have a choice too,” she said. “And we get to choose love.”

“I think that’s the most important part — when you support people that are in pain,” she said. “No one should have to go through pain alone, it’s too difficult, so we have to stand together.”

Heather White, Associate Vice President for Student Affairs and Dean Students at UF, said the university will hold another vigil Wednesday night from 7-8 p.m. in the Plaza of the Americas.