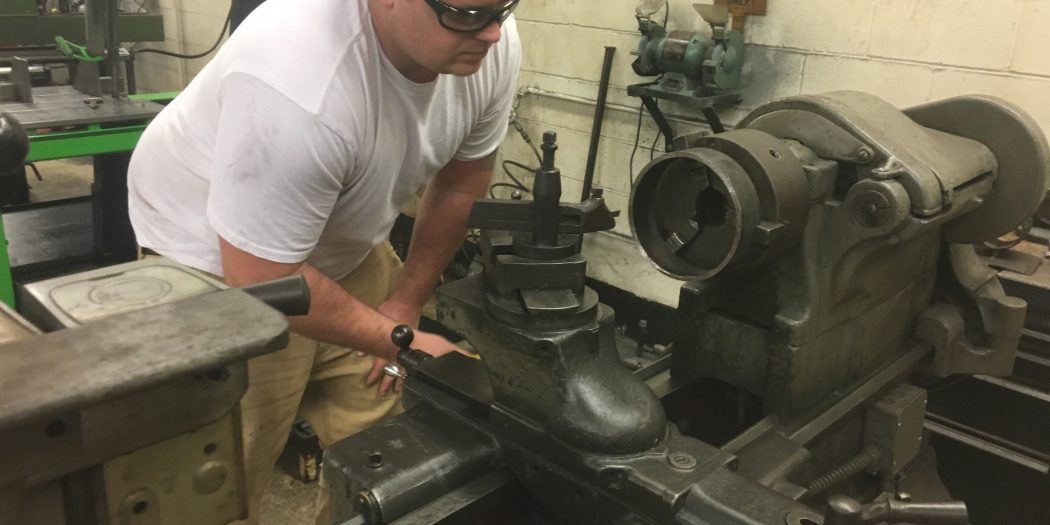 Austin Hendrix uses a lathe to spin pipes around an axis and shape them for welding. If Santa Fe secures funds for its project, equipment such as the lathe pictured here will be replaced with modernized equipment. (Bryan Boggiano / WUFT News)

Santa Fe College is seeking funds to update and expand its technical programs into a $24 million Institute of Technology and Manufacturing on its main campus.

Rep. Bobby Payne, R-Palatka, is sponsoring House Bill 3441, which would provide $1 million to plan and design the institute. The new building and equipment would allow students to work in a modern environment.

“We have a large skill gap in vocational trade, so we’re just trying to put in a center of opportunity for technical education at the state college level,” Payne said.

Santa Fe College President Jackson Sasser filed an appropriations project request in November after an engineering study in 2015 showed that the current equipment and structure, built in 1974, are not up to date and are damaged.

In June, the District Board of Trustees of Santa Fe College approved $6 million to relocate and expand the welding program and other fields. This is one of the college’s top priorities in its Capital Improvement Program.

Sasser said manufacturing and other vocational jobs will help the infrastructure,  job market and economy in both Alachua and Bradford counties.

“What we need is full-time jobs for residents in these two counties,” he said. “We have the personnel, but we don’t have the jobs for them.”

“To know that and not to do something to address the inequities of adults and children is just not acceptable,” Sasser said.
To address the issues involving racial inequality and to foster diversity in its new program, the college plans to create a dean devoted to social justice issues. The dean’s job would be to determine and address issues of inequity in Gainesville and Alachua County, Sasser said.

“A man or woman needs a job to have dignity,” he said.

The $24-million cost of the new institute will be divided into two phases. Phase I includes relocation and expansion of the welding program and planning of the project. Phase II includes the expansion of automotive, air conditioning, heating and ventilation programs.

Ginger Gibson, Santa Fe College’s chief financial officer, said equipment for the new facility will cost about $2 million; planning and construction of a new 62,000-square-foot building will cost about $21 million.

“This project will allow us to upgrade our technology and allow students to use equipment that is out there working today,” she said.

Gibson said the project is coming at the right time. Through 2025, the industry for auto, welding and other industrial technologies is expected to grow 10 percent.

Also, the state’s population is expected to increase by 6 million people in the next 12 to 13 years, according to the Florida Chamber of Commerce.

“There will be a need for these types of individuals, and these are high-wage jobs, which helps the economy as well,” Gibson said. “Having an up-to-date facility will engage the community more with students and the community will be hiring more.”

Joseph R. Salzverg, attorney and government consultant lobbying for the bill, said despite the benefits, passing the bill could be difficult when there are several requests and a finite amount of resources.

Still, Rep. Payne said, failing to prepare for the jobs of the future means “we will continue to lag not only in Florida but in the nation.”

Bryan is a reporter for WUFT News who can be reached by calling 352-392-6397 or emailing news@wuft.org.
Previous ‘The Road of Being Prudent’: Micanopy Looks at Medical Marijuana Moratorium
Next New Pipeline Could Help Fix Water Issues In High Springs