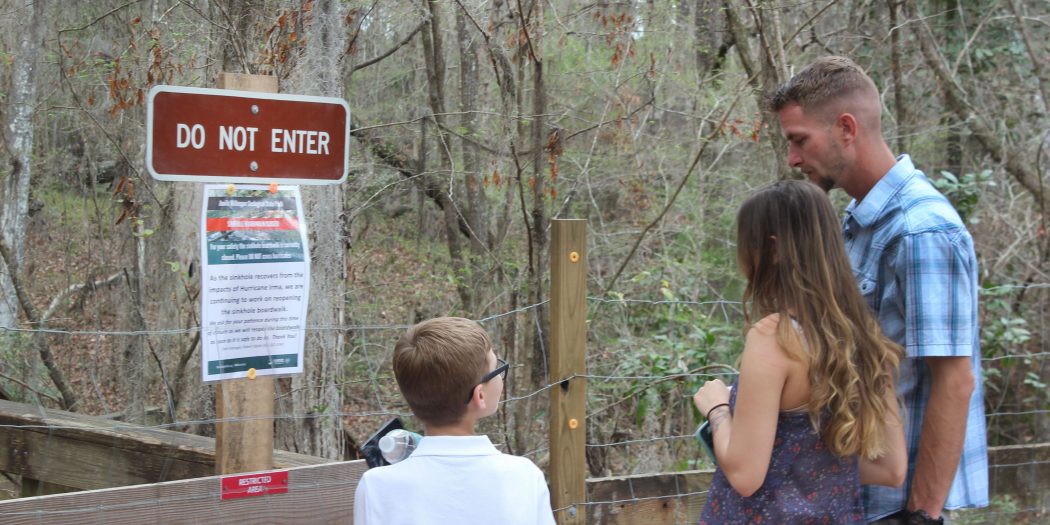 Devil’s Millhopper Geological State Park is still feeling the effects of Hurricane Irma, and the park’s most popular feature remains closed  months after the storm hit Florida in September 2017.

The 232-step staircase leading down to the sinkhole, was significantly damaged during the storm, as well as the vegetation that lined the rock walls.

“It’s been a bit of a struggle,” said park manager Robert Steele of the recovery process. “The changes happened quick.”

Parts of the boardwalk washed away as the sinkhole flooded with approximately 60 feet of water, and boulders surrounding the sinkhole shifted, posing a risk of further damage or potential injury because of falling debris.

“It may not look different to those who visit a couple times a year,” he said. “For folks that walk the stairs every day for their workouts, they will see a lot of changes.”

The biggest difference, he said, will be the exclusion of the observation deck once located at the bottom of the sinkhole.

“We’re engineering what’s best for the sinkhole and best for our visitors,” Steele said. “That takes a little bit of time.”

Jason Mahon, the external affairs manager for the Florida Department of Environmental Protection, said in an email that the department staff is assessing repair plans. Once that is completed, the design and construction of the boardwalk will begin.

A construction company has not yet been awarded the project, Steele said. A completion date for the boardwalk was not given.

The boardwalk closure has impacted the number of visitors to the park, Steele said.

“There’s been a huge decline in people who have come to the park,” he said. “Typically this time of year its extremely busy. Visitation is way down.”

Christina Kresge, who lives just half a mile from the park,  said she now travels to other areas around Gainesville because of the boardwalk’s closure. Kresge said she tries to include educational experiences for her six-year-old daughter Gabriella whenever they go to nature parks, but has not been able to do so at Devil’s Millhopper.

“We went there Christmas Day, and there were a lot of people around us complaining about the boardwalk,” she said. “A lot of families were in the same situation we were. The community is pretty disappointed.”

Leigh-Anne Carlson, who volunteers at the park through the AmeriCorps service organization, said two programs have been added to provide visitors with activities at the park while the boardwalk is closed.

One of the new programs is a Tai Chi class, teaching participants 11 Tai Chi movements. Another program, Owls of North Florida, is hosted by Sunrise Wildlife Rehabilitation and gives visitors a glimpse at three owl species native to North Florida and Devil’s Millhopper. Both events are free to the public with park admission, Carlson said.

“It at least gets people into the park,” Carlson said. “For those who want to hike or camp, we try to send them to other parks in the area such as San Felasco or Paynes Prairie.”

Celeste is a reporter for WUFT News who can be reached by calling 352-392-6397 or emailing news@wuft.org.
Previous 17 Reported Dead in Broward County School Shooting
Next Feb. 14, 2018: Afternoon News in 90