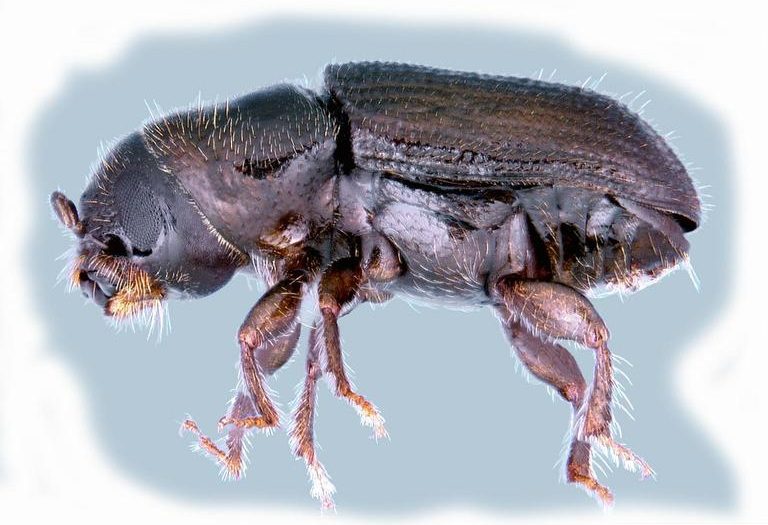 Park staff conducting gopher tortoise surveys about two weeks ago noticed an area of decaying trees near the blue hiking trail, Steele said. State agencies investigated the area and found the tress were infested with beetles.

The beetles can kill acres of pine trees, said Dan Pearson, a Park Service biologist. Optimal weather conditions and stressed trees can trigger an outbreak, he said. The beetles are attracted to trees leaking sap, which indicates the trees are stressed or weak.

Steele said this problem is easier to fix in the winter. Usually the outbreaks spread rapidly in the spring and summer.

“Pine beetles didn’t used to be in Florida,” Pearson said. “In the mid-’90s, Alachua County experienced its first outbreak of southern pine beetles.”

In San Felasco, 200 acres of trees were cut during those first outbreaks, Pearson said.

The beetles target the weakest trees, drill through the bark and lay eggs in egg chambers, he said. After all the eggs hatch, the beetles drill their way out, fly to surrounding trees and repeat the process. The beetles also carry a fungus that can starve and dehydrate trees.

“The trees often die from the fungus infection, not just the damage from the beetle,” Pearson said.

The loblolly pines are the main reason for these outbreaks, he said. They are more susceptible to beetle infestations because they produce small amounts of resin, which is the one defense the trees have against the beetles.

“This outbreak is a symptom of changes in Alachua County,” Pearson said.

Historically, the most common pine tree in North Florida was the longleaf pine, he said. These trees produce enough resin to defend themselves from pine beetles.

The logging of longleaf pines in San Felasco during the 1930s created an opening for loblolly pines to take over. Loblolly pines are native trees, but native to wetland areas, Pearson said.

After the infested trees are removed, longleaf pines will be planted in their place.

“I come out here once a week with my dog, Little Bit,” said Stahmer, who has personal experience with the beetles. “I had to take down about nine trees from a pine beetle outbreak in the late ’90s,” she said. “I have a tiny yard so I didn’t have to replace them.”

“My neighbor came over and said I had a lot of dead trees. You could see they were dying from the top and there was sap running down the trees,” Stahmer said.

Pest control came out and sprayed, but she still ended up having to remove most of her trees. It cost her between $300 and $800 per tree, she said.

The latest outbreak in her neighborhood, Spring Tree, was last summer.

Stahmer said she was sad to hear the park is closing the blue trail, but happy that the restoration process can start soon afterward.

Ellen is a reporter for WUFT News who can be reached by calling 352-392-6397 or emailing news@wuft.org.
Previous UF Requests $30 Million From State For Infrastructure Repairs
Next Kincaid Hills Water Company To Be Sold After Years Of Problems