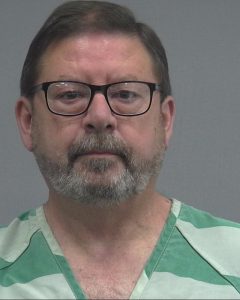 The charges stem from nearly $49,000 in missing cash from the airport parking lot’s payment boxes.

GPD’s investigation began in April after airport chief executive Allan Penska notified the airport board members and police of the missing funds.

According to detective Matthew Goeckel, Adjan was to remove cash from the automated payment system once a week — on Fridays — but also began making his rounds on certain Mondays. Goeckel wrote in a sworn complaint the money removed on Mondays between April 2016 and March 2017 is the money unaccounted for.

Adjan told WUFT News in June than a new automated payment system was to blame. His attorney, Bennett Hutson, did not respond to multiple requests for comment but has requested the state of Florida give him information about Adjan’s case.

Jail records show the Alachua County Sheriff’s Office booked him into the county jail at 4:43 a.m. on Friday on a $45,000 bond.

Angela Hyse is a reporter and web producer for WUFT News. She can be reached by emailing news@wuft.org or calling 352-294-6397.
Previous Local Dentistry Professionals Partner For Free Dental Care Event
Next Musician and Artist’s Rights Activist David Lowery Brings Cracker Back to Gainesville for Changeville 2018

‘It’s too late’ – Father Texted Estranged Wife On Morning He Killed Sons, Himself

Ammunition shortages are not uncommon. They occur roughly every four years with presidential elections, as gun owners grow weary of new firearm legislation and talks of gun control.