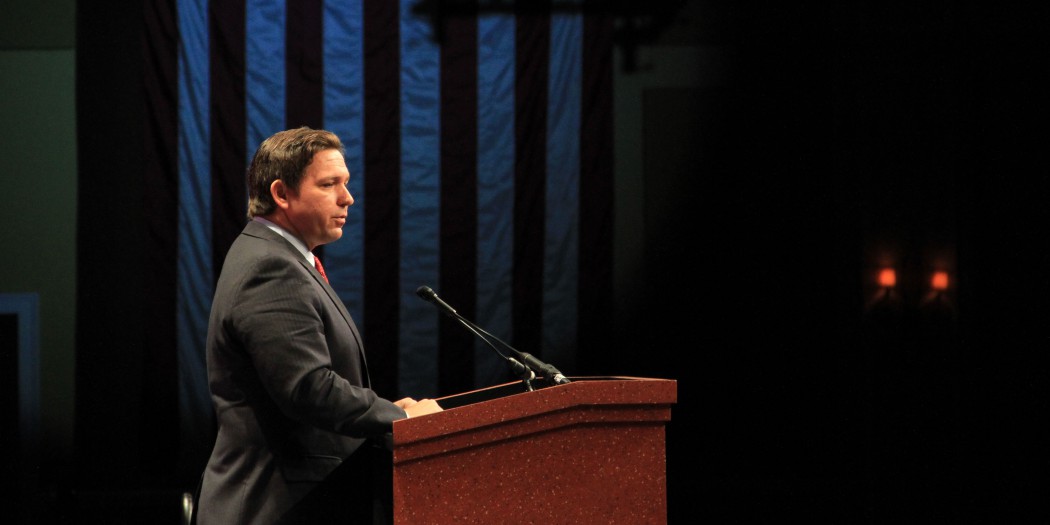 Republican Congressman Ron DeSantis walked across the stage Monday as the late rocker Tom Petty’s “I Won’t Back Down” played in a crowded room at a Boca Raton hotel.

DeSantis stood at the podium with a giant American flag and a Florida flag in the background as he formally launched his 2018 bid for governor.

“Ron is a man who is running for the right reasons,” DeSantis’ wife, Casey, said. “He knows in his heart that he has the strength and courage to do what he knows to be right.”

After thanking his wife for his introduction, DeSantis thanked the crowd gathered at the Embassy Suites by Hilton Boca Raton.

DeSantis first ran for office in 2012 and was elected to a Northeast Florida congressional seat. He has won two more terms and represents the 6th Congressional District, which includes all or parts of Volusia, Flagler, St. Johns and Lake counties.

DeSantis entered the governor’s race after earning praise from President Donald Trump in December and building a group of wealthy financial backers.

“I want to thank the president for his support,” he said. “As we’ve seen in the aftermath of this tax bill, the president and his supporters in Congress, we’re keeping our word in getting the American economy moving again.”

DeSantis is an Iraq War veteran and a former Navy lawyer who has a history degree from Yale University and a law degree from Harvard Law School. While at Yale, he also played on the Yale Bulldogs baseball team.

Two years ago, DeSantis set his eyes on a U.S. Senate seat, but ran again for the House when U.S. Sen. Marco Rubio, R-Fla., decided to seek another term in the Senate after ending a bid for president.

Wearing a navy suit and red tie, DeSantis on Monday gave a 25-minute speech that covered issues such as foreign policy, supporting Trump’s recognition of Jerusalem as the capital of Israel, the economy, the opioid crisis, immigration, assisting veterans and improving Florida’s education system.

“As (U.S. House) National Security Subcommittee chair, my efforts helped sparked changes in how the VA (Veterans Administration) treats veterans suffering from post-traumatic stress,” he said. “Because of our efforts, the VA established a pilot program to do what I and others in the veteran community have been urging — use of specially trained service dogs as a way to assist PTS-afflicted veterans.”

As governor, DeSantis said he wanted to improve education in the state, including providing options for vocational training for trades and computer training. DeSantis emphasized the importance of preparing students for college and citizenship. DeSantis said there should be a renewed focus on the Constitution and the Bill of Rights.

“We’re a nation not based on a particular race or religious denomination, but a set of ideas that mark a free society,” he said. “Students need to be equipped with deep understanding of these principles, and they need to understand why these principles make America unique, and I will work to make that a reality so that every student graduating here in Florida, has a sense of what it means to be an American.”

“It’s so refreshing to have someone go to Washington and do what they say they are going to do,” Gonzalez-Colon said. “He’s (DeSantis’) the one asking me every week, ‘What can we do to help in Puerto Rico?’ That’s what a friend does. He is a man of his word.”

“I’m proud to stand here today before you, as a veteran of our Armed Forces, as a principled conservative leader and with the support of our president, to be running for governor of Florida — the greatest state in the union,” DeSantis said. “A governor needs to lead, and I pledge that I will work every day to secure Florida’s future by expanding economic opportunities, promoting innovation and education and keeping our streets and communities safe.”

The News Service of Florida is a wire service to which WUFT News subscribes.
Previous Former US Rep. Brown Reports To Federal Prison For Fraud
Next Jan. 30, 2018: Morning News In 90