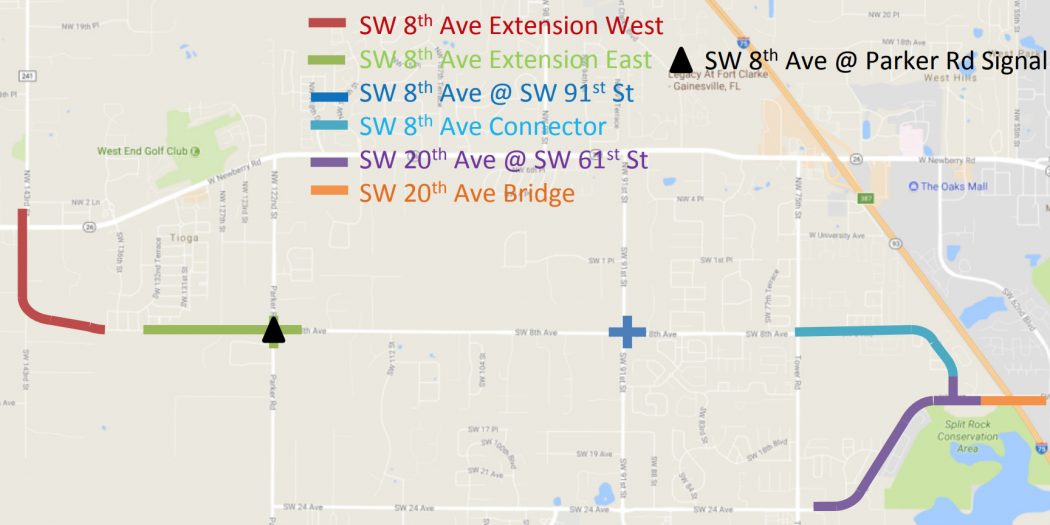 Why Isn’t Southwest 8th Avenue Near Tioga Open Yet?

This story is a part of Untold Florida, a WUFT News series built from your questions. Randy, an audience member, asked us, “Why hasn’t the extension of SW 8th Ave. between 122nd Street and the Tioga area been opened yet when it appears to have been completed for months?”

The opening of the SW 8th Avenue southeast of Tioga was nearly held up even longer this week because of one decision.

Install a red-light signal as planned at the SW 8th Avenue and Parker Road intersection, allowing it to open next month, or tear it all out and take 18 months to go with a roundabout instead?

A section of Alachua County Code requires the public works department to look at both options when it needs to add a traffic control device. It’s a consideration that includes financial cost and other factors — including the loss of human lives.

According to commissioner Mike Byerly, previous county employees did not analyze both options and instead decided on a traffic signal.

“This makes me so angry, and I can’t stand it,” Byerly said during a meeting on Tuesday.

Brian Singleton is Alachua County’s transportation manager for engineering and operations. He provided data from the American Association of State Highway and Transportation Officials’ (AASHTO) Highway Safety Manual predicting that the intersection — over a 20-year period — would see about five crashes from the roundabout and approximately 27 from a traffic signal.

In its first two decades, two people would be injured or die in the roundabout crashes, per AASHTO, and more than eight would likely be injured or die if it were instead a red-light intersection. Singleton noted the crash predictions “don’t have a high level of accuracy at this time.”

“It seems like we’re trying to move forward with a previous mistake,” commissioner Ken Cornell said, “which would cause safety to be four times less, and I have a problem with that.”

But Singleton said constructing a traffic signal has already cost taxpayers $1.4 million in pavement and signaling while pivoting to a roundabout would add another $2.7 million and 18 months of work to the project.

Cornell wanted to see county staff now complete the roundabout versus red-light analysis; he then suggested inviting the public (particularly those who would travel that intersection daily) to an evening meeting where they could discuss the analysis.

But that involves stopping the project, further delaying the opening of the SW 8th Avenue extension. All that’s left for the project now is to add landscaping and a final layer of pavement. Commissioner Robert Hutchinson, who represents the district that includes this intersection, suggested installing the traffic signal as planned for now and holding a meeting to examine converting certain traffic lights to roundabouts across the county. There are currently five roundabouts in the county.

He and three other commissioners ultimately voted to install the red light as planned. That clears the road to open next month. Byerly voted against it because he wanted the analysis completed before the contractor (V.E. Whitehurst & Sons, Inc.) installs the red light and opens the road.

The entire SW 8th Avenue corridor project, from Tioga across the I-75 bridge, was budgeted at $12.6 million. The cost is now $29.9 million, so the shortfall will be made up through financing and the use of gas tax funds.

After publication of this story, Singleton described that level of budget discrepancy on an Alachua County road project as “an anamoly… Normally you scope a project and prepare a budget, not the other way around,” he said. “For this project, we started with a number and then went to the scoping process.”

An earlier version of this story contained information regarding the project’s budget and projected deaths and injuries from the Jan. 23 Alachua County Board of County Commissioners meeting that was either inaccurate or required additional context.

Ethan is a journalist at WUFT News. He's a Pennsylvania native who found a home reporting Florida's stories. Reach him by emailing emagoc@wuft.org or calling 352-294-1525.
Previous Jan 6,2018: Morning News In 90
Next ‘Let Trump Be Trump’: What Five Local Supporters Think About the President’s First Year