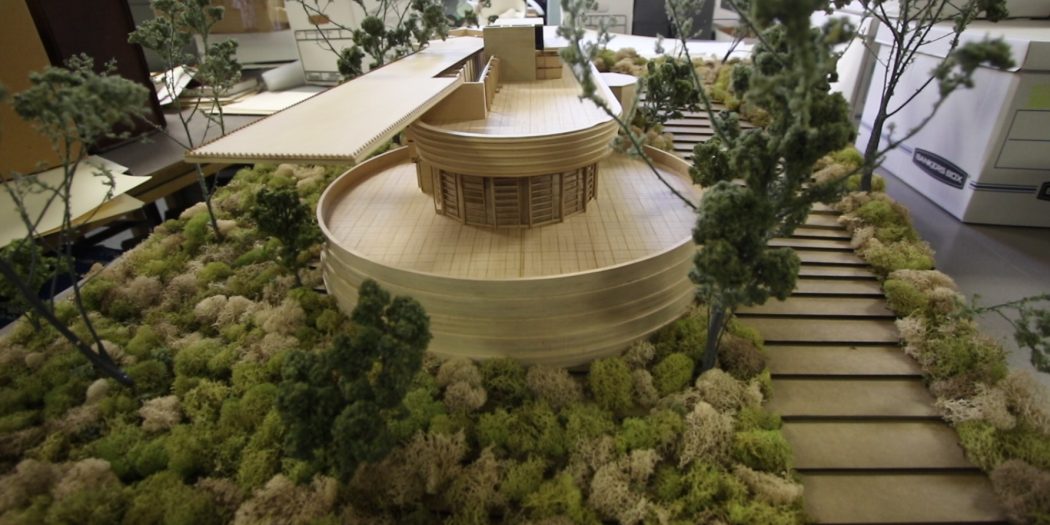 A scale model of the Wright-designed house exists in the Smathers Library special collections archive. (Photos and video by Ethan Magoc/WUFT News)

Frank Lloyd Wright Designed A Fraternity House For UF, And It Was Never Built

As Ken Treister remembers it, he and his circle of friends at the University of Florida in 1951 had two desires.

The first was for a fraternity house. Zeta Beta Tau, of which he was a member, was then among a group of UF fraternities looking for a permanent campus home.

Rebellion was his group’s other pursuit. In Treister’s estimation, the School of Architecture’s faculty at the time had a “closed mind” and didn’t welcome visiting faculty. Treister and his architectural studies peers wanted to invite the guest of all guests: Frank Lloyd Wright.

“Frank Lloyd Wright was a celebrity architect unlike any we’ve ever had and that we don’t have today,” University of Florida archivist John Nemmers says. “There was Frank Lloyd Wright, and there was everyone else.”

He was already known worldwide in the 1950s for his designs. His reputation for speaking his mind also preceded him.

“He was a very assertive architect. He wasn’t introspective or bashful. He was very much interested in publicity,” Treister says. “Rebels loved rebels.”

Letters were exchanged, and Wright one day flew into the Gainesville airport. His speaking fee was $1,000; the students sold $1 tickets to cover the cost, and the Oct. 23, 1951, crowd at the Florida Gym was standing room only.

He arrived and walked past the assembled architecture professors and instead met students informally in the lobby, giving an impromptu lecture. The speech itself was not about architecture, with Wright opting for a focus on international affairs.

Treister later chauffeured Wright during his trip, and he summoned the audacity to ask him to solve that other problem. Would he design a fraternity house for the University of Florida and Zeta Beta Tau?

Yes, he told the 20-year-old student, but on one condition. Architecture students themselves had to help construct it — the foundation digging, bricklaying, window fitting, everything.

His request had a precedent. One hundred and twenty miles to the south, Florida Southern College students were building by hand a number of Wright-designed structures on campus. It saved the school money, sure, but to Wright’s thinking allowed students to learn by doing.

The case for student labor at Florida Southern was easier. It’s a private college. In Gainesville, the situation was going to be more bureaucratically challenging, with any UF project requiring state approval and oversight.

“He always said that committees are a disaster,” Treister said.

Still, Wright returned to his home in Wisconsin after the Gainesville visit and created blueprints for a fraternity house to be built on a wooded and hilly site on the University of Florida campus. The intended area is today known as Fraternity Row.

When the fraternity brothers received Wright’s blueprints, Treister said they were duly impressed: “It’s one of the most beautiful things Frank Lloyd Wright ever designed.”

That was one group’s opinion. As Treister and his cohort graduated, the grand plan went awry. The university had a building committee, and the state had a Board of Control, which reviewed the Wright plan and found 22 potential code violations — “issues of nonconformity,” as Treister later put it.

The most significant? There was no second fire escape.

Based on correspondence records left behind, Nemmers says, “the three parties weren’t always in step with each other.”

Treister remembers Wright writing in response that “any healthy college student can jump off the rear terrace and land safely on his feet.” The 8-foot jump from that terrace was apparently too high a hurdle for by-the-book state officials. Couple it with the student labor and construction cost issue, and the project was doomed.

But what would the Wright-designed ZBT house have looked like?

It was long and narrow, with an overhanging roof above the two-tiered front porch. The showers on the second level were open air, which would have made for cold cleansing on January mornings, and the entire structure was intended to conform to the hillside against which it would be constructed.

The house ZBT eventually occupied on campus was not a Frank Lloyd Wright creation.

“Every visitor to the University of Florida would go to see the Frank Lloyd Wright house, and it would be a showcase worth many, many millions of dollars,” Treister says. “But the people on the building committee weren’t interested in Frank Lloyd Wright.”

For those interested in seeing Wright’s creation today, an architecture professor and her class made it possible, albeit on a smaller scale. Martha Kohen’s students in recent years built a model from Wright’s blueprints, and for a time that model sat in former UF President Bernie Machen’s office.

“He also was enamored of the story,” Nemmers says.

Today, it’s preserved at the university’s Smathers Library in the architecture archives, and Treister this month published a book about this unrealized part of UF history through LibraryPress@UF. It’s available online as a PDF.

See more of the students’ scale model below.

Ethan is a journalist at WUFT News. He's a Pennsylvania native who found a home reporting Florida's stories. Reach him by emailing emagoc@wuft.org or calling 352-294-1525.
Previous Jan. 22, 2018: Afternoon News in 90
Next Gainesville Daycares And Schools Dealing With Flu Season