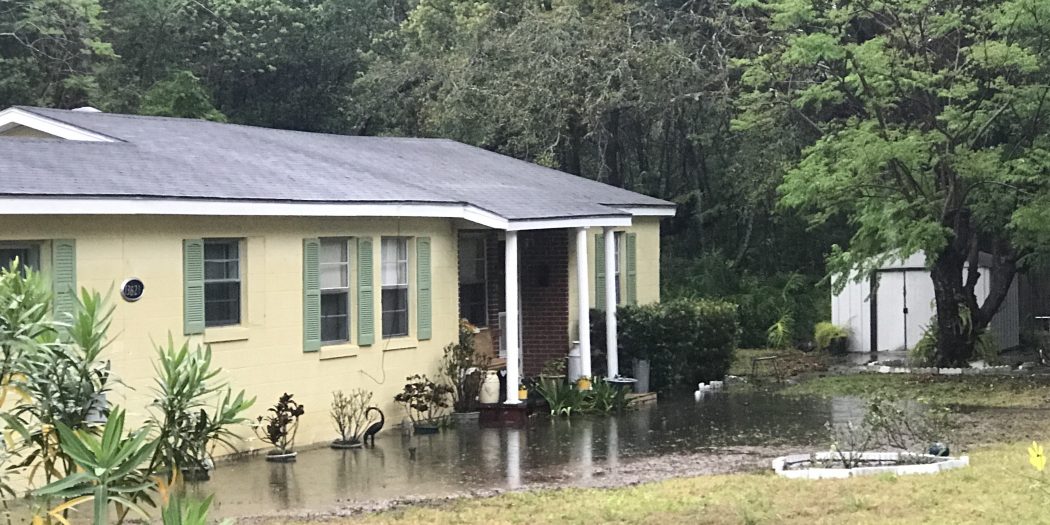 For Marion County resident Sarah Gavin, rain restricts even the most basic freedom.

For some people living in the Stanton-Weirsdale Community, the sound of thunder causes a sense of panic.

Rain is probably on the way, and with it, road problems.

The small community is roughly a 30-minute drive from Ocala. One of its residents, 80-year-old Sarah Gavin, has lived in Weirsdale her whole life. In her mid-20s, she moved into a house of her own, got married, then raised six children. Living off of Southeast 134th Avenue, a road stemming from the intersection of County Roads 42 and 25, Gavin began to experience runoff issues about five years ago. She noticed that both county roads and part of 134th Avenue were repaved in a way that caused the pavement to slant toward her property.

She said road alterations around her have ultimately caused rainwater runoff to be channeled onto her property. Over the past five years, the heavy rainwater has caused foundation issues and mold growth on Gavin’s property, plus impact access to and from her house.

“The water (is) everywhere in my yard — all out in the road, and now it’s coming down and it’s coming straight down to the windows.  The Saturday that we buried my daughter, we had prayer on the back porch,” she said, “and when we got through with the prayer and went to go get into the cars and go to the church, we all waded in water. The water gets up to my back door.”

Speaking during public comment sessions at multiple county commission meetings, Gavin has actively sought the assistance of Marion County officials. While she worries about her situation on a daily basis, Gavin feels as though flooding issue do not worry those within the county government.

“Sometimes I get frightened about it,” she said. “I’m just living on — what old people used to say — a wing and a prayer.”

Gavin is not the only one experiencing problems. Nathaniel Coney has lived in Weirsdale for 79 years, around the corner from Gavin’s property. The road he lives on is an uneven dirt road. It’s been that way since he was born. The change to the road Gavin lives on, however, has had some impact on Coney’s property as well.

He said it is the only part of town without paved streets.  “It’s the same way it was, I guess, since 1953 or ’54 down here on this end,” he said. “They took that (culvert) out and changed the street up, now all of the water come down this way, all of it comes down here.”

“As this is an open case, we are limited on what information we can legally provide. This specific home sits at the lowest point in a drainage basin. It is the position of Marion County government that our organization is not the cause of the Gavin family home’s water drainage concerns.”

The county has reviewed Gavin’s case and has requested a dismissal. Now, both parties are awaiting a final decision by a sitting judge to proceed with the case or to drop it.

The county did not address her neighbors’ similar issues.

The residents within the Weirsdale community sent of list of complaints to the U.S. Department of Education in July 2017.  The department’s Office of Civil Rights sent a letter back on Nov. 17 addressing the list of complaints and stated they only have jurisdiction over the following allegation: “Whether the District discriminates against black students at Stanton-Weirsdale Elementary School (School) who reside in the School’s two-mile radius walk zone by failing to provide them equal access to the School, in noncompliance with Title VI…”

DOE officials have assigned a senior attorney to open an investigation on this issue and are currently working to gather information for their case.

In addition to Gavin’s concerns, neighbors around her are experiencing an even bigger issue.  Altamese Hagins Bosier, a Weirsdale resident of 55 years and neighbor to Gavin, said the roads they live on have been deemed private, meaning the county is not responsible for upkeep or repaving the community’s roads.  Because the status of the roads has been changed from “Public” to “Private,” residents in the area have had to file for a grant that would cover the cost of repairing the roads.

“I’m not interested in a grant to fix these roads,” Bosier said. “Someone of us put out a couple of dollars to help so we could get through the roads. Others put out a lot more. All these donations are good, but we pay taxes, state taxes, sale tax, property taxes. The county gets money from the federal government. All these other places are donating, why should we have to fill out a form to try and find a grant for us to do something the county should’ve been doing years ago?”

Founder of the Community Empowerment Program, Don Browning, has dedicated the past year to helping Gavin and her neighbors. Although he lives on the opposite side of County Roads 42 and 25, Browning has spent his time raising donations, adding gravel and dirt to the uneven road surfaces, and advocating for change in the Weirsdale community. Browning believes individuals like Gavin, Coney and Bosier need to be treated fairly by the county.

“The idea is you gotta be able to read off the same menu,” he said. “No sidewalks, no paving, no culverts, you know just a cut in the bank and the water just running on in.”

Weirsdale resident of 67 years, Robert Hanks Sr., believes that even though no one in the community has been able to get a solid answer from the government, handling the situation over time in a peaceful manner will get the job done.

“We got to be humble with this thing,” he said.  “I ain’t seen a fire truck yet that went to put out a fire with fire. It can’t be done.”

Whether changes happen now or in the future, Bosier says she will remain positive on the issue.

Alexis is a reporter for WUFT News and can be contacted by calling 352-392-6397 or emailing news@wuft.org.
Previous Follow Our Local Delegation’s Work in Tallahassee with WUFT’s 2018 Legislative Tracker
Next Jan. 10, 2018: Morning News In 90